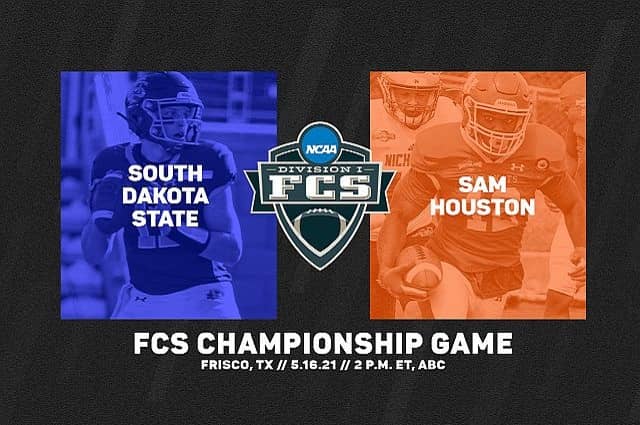 A football National Championship in May is bizarre, but the stage is set for the 2021 FCS Football Championship and no one here is complaining. The South Dakota State Jackrabbits will battle the Sam Houston State Bearkats in Frisco, Texas on Sunday, May 16 at 2 pm ET.

The Jackrabbits dominated on their way to the National Championship game. South Dakota State took on Delaware in the semi-final and blew past them. Delaware had allowed less than 300 yards per game to opponents and were 8-1 entering the contest, but the Jackrabbits threw up 33 points in a 33-3 win. They got the job done on the air and on the ground. Quarterback Mark Gronowski tossed two touchdown passes as well as scoring another touchdown on the receiving end. Running back Pierre Strong had 73 rushing yards and a score on the ground, as well as the touchdown pass to Gronowski on the trick play.

The most impressive part of the win was the SDS defense that allowed just a field goal.  Although Delaware dominated time of possession by controlling the ball offensively for over 37 minutes, it did not translate to points, or yards for that matter, as the Jackrabbits defense allowed just 216 total yards while giving up the lone field goal.

Sam Houston State had a much different road to the final. They had to mount the ultimate comeback against James Madison to reach this game. The Bearkats found themselves down 24-3 at the half, as the Dukes headed into the locker-room with a score after capitalizing on a Bearkat interception with about a minute left in the half.

Whatever adjustments were made at halftime worked, as Sam Houston looked like a completely different team in the second half.  They scored 28 points in just over an eight-minute span in the third quarter and took their first lead. They never relinquished it.  James Madison scored a touchdown, and two-point conversion, to make it 38-35 with about 10 minutes left in the game, but that turned out to be the final score.

Keys to the Game:

South Dakota State, Run the Ball early: The Bearkats have one of the best rushing defenses in the country, allowing just over 50 yards on the ground per game. If the Jackrabbits want to be successful in this game, they will have to try and establish some sort of running game early and stick with it. As soon as they abandon the run, there is no telling how controlling this Sam Houston defense will be.

Sam Houston State, Big Play Energy: The Bearkats have one of the most electric wide receivers in Jequez Ezzard. He was pivotal in the comeback against James Madison with over 100 yards receiving and a touchdown. If the Bearkats find themselves down early in this game, they can’t be afraid to have QB Eric Schmid air the ball out to this guy and see what will happen. Momentum is huge for this Sam Houston team and an electric play may be all they need to get the job done.