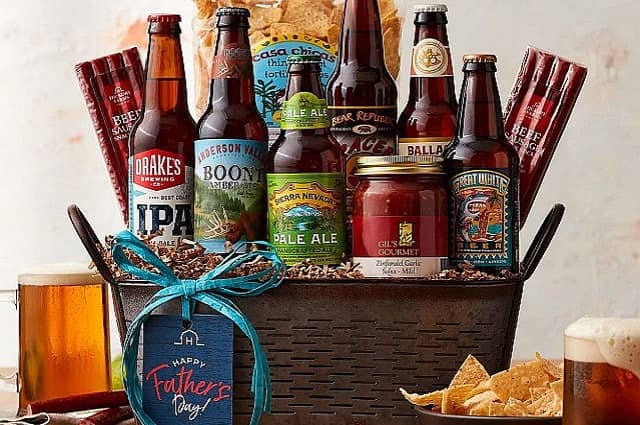 Dads take on many roles: nurse, teacher, mechanic, banker, gardener, police, protector, friend, mentor—the list goes on. The job of dad also comes with a gamut of emotions, from awe at holding their newborn to pride in their goal-scoring youth to anger at their disrespectful teen. To show your appreciation for him (and what he’s endured on your behalf), send your favorite father a mix of beer, in a beer gift basket perhaps, to remind him of all he’s experienced as a parent. Here’s a beer-food pairing guide just in case you also have a Father’s Day meal planned as well.

Our Mutual Friend Brewing Co. brews this stunning brown porter with 100% Colorado-grown malt and hops. The Denver-based brewery describes its 4.7% ABV beer as having a “light, malt-forward body with notes of caramel and chocolate.” When new dads need a break from the first few days of diaper changes, middle-of-the-night feedings, and crying they cannot stop, this beer presents a tasty escape.

As little ones mature, they push the limits and try things that put them in harm’s way. Dad always tried his best to keep you safe. Electrical outlets posed one of the first hazards, then stairs that needed to be conquered. Dangers morphed into playing with matches, climbing trees, and ultimately hood-surfing on a friend’s car. Papa Bear’s concerns were likely valid. This Munich Dunkel Lager by Grimm Brothers Brewhouse in Loveland, Colorado, helps him relax and reminisce, maybe even chuckle, at the folly of his offspring.

Daddy Warbucks your dad may not have been, but you didn’t care. You still treated him like an ATM. This double IPA from Marlborough, Massachusetts-based Flying Dreams Brewing Co. combines six hops—Cashmere, Mosaic, Citra, Ahtanum, Ekuanot and Crystal—to create a palate-pleasing brew that’s hoppy and high in alcohol (9% ABV). Fruit-forward notes of tangerine, orange, guava and grapefruit linger, and like daddy’s money, the beer has limited availability.

Red-faced, fists clenched, eyes flashing. Yep, Pop is pissed. Whether yours whispered in anger or yelled loudly enough that the neighbors knew you had really done it this time, your old man probably had at least one moment when your behavior drove him to the edge. Furious by Minneapolis’ Surly Brewing Co. pays homage to the emotion that is inevitably part of parenting. This unique IPA carries a reddish amber hue and caramel notes that go well with intense hops and citrus notes.

Whatever you did that made Pappy furious landed you in serious trouble. You were grounded. You were never leaving the house again. To ensure you stayed the course, the family patriarch morphed into jailer. As night warden, he was there to prevent you from sneaking out of the house after midnight. You thought you were tricky, but he was trickier. Avery Brewing Co.’s Night Warden is as smooth and full-bodied as the man who kept you home at night. Part of this Boulder-founded brewery’s barrel-aged offerings, this stout carries strong notes of vanilla and caramel, plus the flavors of the whiskey barrels in which it aged for three months.

Since you’re old enough to legally buy the man you admire the most a beer (or six), it’s likely you can look back on your childhood and laugh a bit. Dad has earned his relaxation. Your relationship has matured enough that y’all can kick back and sip an adult beverage together. Try Boston-headquartered Samuel Adams’ limited release Porch Rocker, a low ABV Lemon Radler. It’s essentially a lager with a twist of lemon. It’s perfect for a summer toast to Dad on Father’s Day.