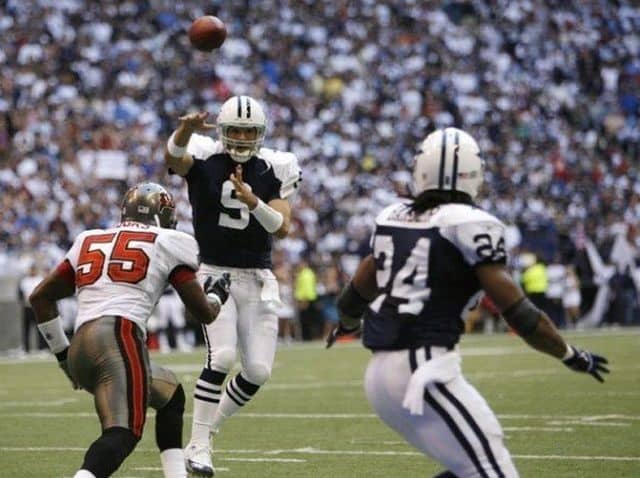 Putting on your stretchy pants, stuffing your face with good food, eating way too much pie and watching tons of NFL football. Those are the basic tenets of any good Thanksgiving. Since 2006, there have been three games played each turkey day and that tradition will carry on this year with the Steelers and Ravens headlining the Thanksgiving games this year. The Lions and Cowboys of course play every single Thanksgiving.

Some of these games are incredibly memorable while others we have forgotten all about. That’s what inspires our list today, the Top 3 Thanksgiving Football Games since 2000.

It’s always fun when the Cowboys are given a run for their money on Thanksgiving Day. This time around they had to face the Saints and Drew Brees who were coming off a Super Bowl winning season. New Orleans jumped out to a 17-0 lead by the end of the first quarter with Chris Ivory running for two scores. A pair of field goals before the half ended and three second-half touchdowns helped the Cowboys storm back in this one. Dallas actually led 27 to 23 in this game and had a chance to extend the lead in the 4th quarter but Saints safety Malcom Jenkins stripped the ball from Cowboys receiver Roy Williams inside the Saints 15 yard line after a 47-yard catch and run.  That turnover left Brees way too much time for a comeback. At the two-minute mark, Brees capped off a five-play, 89-yard drive with a touchdown pass to Lance Moore to take a 30-27 lead. The Cowboys had one last shot to tie the game, however they couldn’t connect on a 59-yard field goal with 25 seconds left in the game.

This game isn’t memorable for the score or for any big comeback and yes, the Cowboys were bound to show up on this list more than once, they play EVERY single Thanksgiving. The reason that this is one of the greatest Thanksgiving games is because it introduced us to a guy who we would end up watching every turkey day for the next ten years. The Bucs thought they were getting a huge break by missing Drew Bledsoe on the schedule, but Romo – making only his 5th NFL start – had other plans for Tampa. He proceeded to throw five touchdown passes, going 22-29 for 306 yards passing. Mike Alstott scored the only Bucs touchdown with nine minutes left in the first quarter but they never saw the endzone after that.

Don’t worry, we weren’t going to pick three different Cowboys games for this list.  This was one of the best offensive games on Thanksgiving that we can remember. Matt Stafford threw for  441 yards, on 61 attempts, while the Texans Matt Schaub threw for 315 yards. Andre Johnson edged out the Lions Calvin “Megatron” Johnson with 188 yards receiving to 140. Arian Foster added 102 yards and two scores on the ground for the Texans. The defenses didn’t show up in this one is what we are getting at here. After Foster scored his 2nd touchdown, with less than two minutes left in the game, the game went to overtime and the Texans were able to walk it off with a 32-yard field goal.