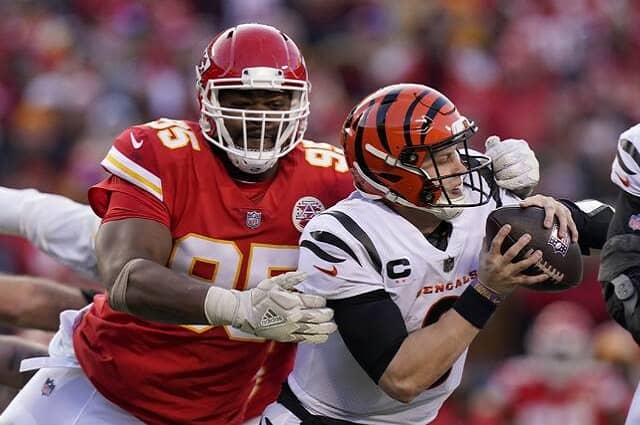 The NFL is truly a madhouse this season. There are teams with high expectations that are simply flatlining now – looking at you Tampa Bay, Green Bay and Denver. While others are excelling at a rate which we didn’t think was possible when the year began – hello NY Jets, Minnesota Vikings, and Miami Dolphins. There are some big storylines this week and multiple games with playoff implications on the line. Here are our top 3 2022 NFL games week 13.

In a shocking twist, the AFC East has been one of the most fun divisions to watch this year. The Bills are great, the Jets are good, the Patriots are good, and the Dolphins are legit Super Bowl contenders. These games are essential for tie-breaker solutions in this division and a win for New England is basically a must at this point if they want to get back into the division title hunt. Both teams have both had a full week off after playing on Thanksgiving. The Bills had an exciting game where they barely left Detroit with a win while New England led going into the 4th quarter before succumbing to the Vikings. This is the first of the two matchups between these two teams this year, with the second coming in the final week. I like Bills QB Josh Allen to return to form and blow it up in New England. Prediction: Bills 28 Patriots 20

Burrow vs Mahomes is going to be a matchup that we will be talking about for a very long time, so I am excited to plop down in front of the screen on Sunday and enjoy this game to the full extent. The Bengals upset KC in the playoffs last season which sent them to the Super Bowl. I would bet that the Chiefs have not forgotten that game one bit and they will be looking for revenge. The Chiefs are playing their best ball so far this season while the Bengals are coming off a solid win against Tennessee on the road. I think getting WR Ja’Marr Chase back is massive for this Bengals team and could push them over the edge with all the injuries that Kansas City is dealing with. I expect this one to be close, but I like the home team. Prediction: Chiefs 24 Bengals 27

This is going to be an interesting game to watch, but not necessarily for the game itself. Deshaun Watson is making his return to the field for the first time in nearly two years. After demanding a trade out of Houston, he was accused of multiple sexual assault charges and has dealt with that for more than a year now. After a suspension that lasted 11 games this season, he is eligible to finally play and as fate would have it, it will occur against his former team in Houston. The Browns are clearly the much better team in this game, but it will be interesting to see what the criticism is like for Watson as he takes the field in his first public event since everything has gone down. Expect a bunch of booing for Watson whenever he is on the field.  Prediction: Browns 24 Texans 17