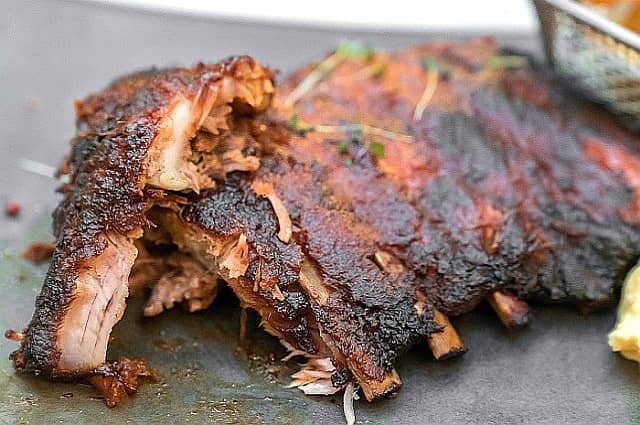 The BBQ lifestyle is all about choices – steaks, brisket, chicken, burgers just for starters.   But when it comes to the real iconic heavy hitters, few things can take a swing at a hungry gathering like a killer rack of barbecued ribs. Loaded with superb, tender meat and flavored to perfection, there’s just something satisfyingly primitive about eating them. It’s a tradition as old as mankind itself — clutching a substantial rib in both hands and toothily tearing meat straight off the bone.

Pork ribs have hogged the spotlight since the start of modern BBQ, but recent years have stopped putting beef ribs out to pasture. It’s not hard to see why, either: with the fattier, meatier returns on beef ribs, you wind up with an impactful rack of bones that offers plenty to love. But pitmasters aren’t done with pork ribs anytime soon! With all the flavoring options, decades of rib trends, and sheer staying power of barbecued pig, there’s just no stopping the pork juggernaut from muscling in on competitions.

But what distinguishes beef ribs from pork ribs? What different kinds of rib cuts should you expect from your butcher? How do they behave separately on the smoker or the grill? Our friends at BBQGuys got in touch with New Orleans native Chef Kenneth Temple to get the lowdown on the delicious, juicy ribs of everything bovine and swine.

What are the Main Differences Between Beef and Pork Ribs?

Want a simple comparison between both sets of ribs? We hear you. Covering everything from the fat-to-meat ratio to the relative cost difference, read below to see for yourself how these two dominant slabs of meat stack up. (Spoiler alert: there are definite key distinctions but, when it comes to juicy BBQ ribs, everybody’s a winner. Well, maybe not the livestock.)

Eating pork ribs is often a one-handed affair. Meanwhile, if “beef ribs take up a lot of room” raises eyebrows, you’ll want to brush up on your cattle anatomy.

The bigger, fattier animal always boasts the stronger natural taste. With that said, the milder taste of pork ribs will take your seasonings much further.

Typically, pork ribs are friendlier to the backyard bonanza on a budget. Pigs are uniformly easier to raise, cheaper to feed, and their ribs are often sold in bulk.

5. All That Marbled Fat

The ample gelatinous fat of beef ribs runs through the meat during the cook for that smoky brisket flavor. Want leaner and healthier cuts? Choose pork ribs.

Ah, dependable physics. While there’s a negligible time difference in cooking back ribs, it should surprise nobody that larger bone-in meat asks for greater patience.

If you want to make a killer rack of barbecued ribs, check out this award winning recipe from our friend Sterling “Smitty” Smith at Loot N’ Booty BBQ!