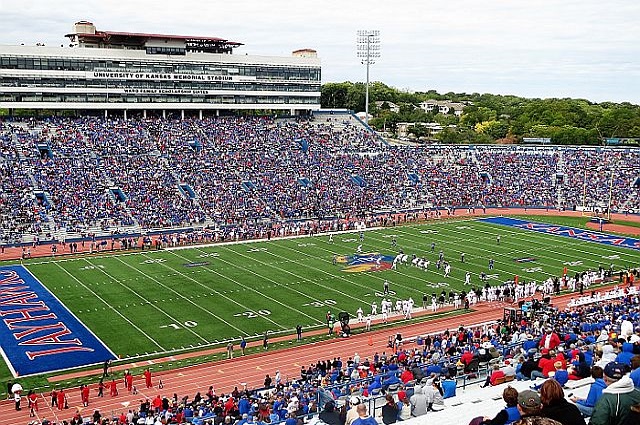 It was another great week in college football where we saw a couple teams rise as legit contenders and others out themselves as total frauds. A lot of that is being seen in the Pac-12 and the Big 12 where teams are flipping and flopping non-stop. Week 6 will provide us with some top-notch matchups and a heated coaching rivalry. Here are our top 3 2022 college football games week 6.

Here are two teams in the Big 12 that are making a whole lot of noise early in the season. So much commotion in fact, that ESPN College GameDay is making its first ever visit to Lawrence Kansas for this matchup. TCU and Sonny Dykes are enjoying a terrific first year together and their high powered offense is turning heads. They are coming off a blowout win over Oklahoma in an embarrassing fashion for the Sooners. Kansas is the talk of college football. The Jayhawks and Lance Leipold have their best start in more than a decade. Kansas has the 4th best offense in the nation, and we should be set for an absolute shootout in this one. It feels like a classic Big 12 game is in the mix for this. I love that Kansas has begun packing their stands and getting energy and excitement around their program. I am backing KU in this one and I am hoping that the best story in college football continues. Prediction: TCU 38 Kansas 41

Jimbo Fisher vs Nick Saban. This is all this matchup is about. Sure, the Aggies did knock off Bama last year in College Station, but I am not betting on that to happen this year. This rivalry really began last May when Saban made comments about A&M’s recruiting and Fisher responded by calling Saban’s past despicable, telling reporters to ask former coaches about the so called “god” of college football. Jimbo went as far as to say that you learn how to coach from a guy like Bobby Bowden and learn how not to coach from a guy like Nick Saban. On Monday, the Aggies coach did say that’s all behind them, but I don’t really buy that. This is going to be a fun one to see how Bama responds and just how mad Saban really is by those comments. Prediction: Texas A&M 17 Alabama 38

As I mentioned in the opening paragraph, there are a couple surprise teams in the Pac-12 and UCLA certainly stands out. The Bruins are ranked 18th after a 5-0 start. Last week, they knocked off Washington after scoring 40 points. The Utes should bring a much tougher defense to Los Angeles, especially after limiting Oregon State to just 16 points a week ago. There could be a Pac-12 member in the College Football Playoff this year if USC gets ranked high enough and a big upset ensues later in the season. Utah and UCLA need as many ranked wins as they can get to add to the resume and now is a great time to start. Prediction: Utah 25 UCLA 20