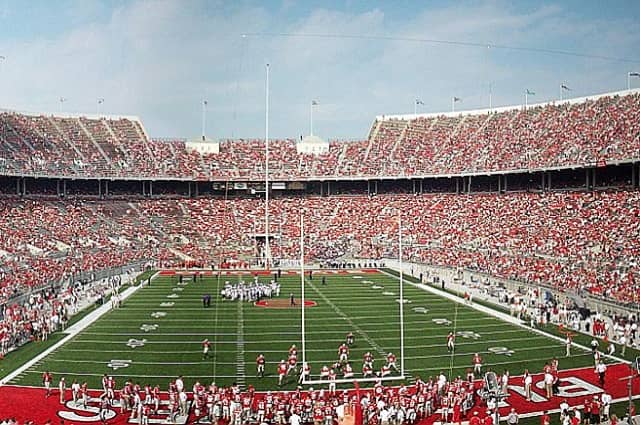 It is back! College football week 1 has arrived and there are some great games on the slate that will immediately throw us back into the action. I can’t wait to wake up early on Saturday, flip on College Gameday, and bask in the fact that football has arrived. Let’s take a look at the top college football games week 1.

We don’t always see the greatest week 1 matchups, so it’s a blast when we get two top-5 teams playing in a game that immediately puts some sticks into the fire for the College Football Playoff. Ohio State played Oregon early last season in Week 2 and that loss felt like it upended their season. They know that they can’t allow that to happen this time around against a Notre Dame team that is much different than last year’s. The Fighting Irish are now led by new head coach Marcus Freeman and there should be a re-energized feel to this team. This is an Ohio State offense that is hard to stop, and they showed that all season long in 2021, nearly putting up 50 points in the Rose Bowl. I think Notre Dame will stick around for one half, but I like the Buckeyes chances of playing for a National Championship this season and it starts here. Prediction: Ohio State 45 Notre Dame 27

This is our first look at the reigning National Champions. In their first game, they are going to look across the way and see their former defensive coordinator Dan Lanning who is now Oregon’s head coach. While Georgia should be the easy favorite here, this game could be a whole lot closer than we think it’ll be. The Ducks are loaded with talent and so are the Bulldogs, but they did lose a massive amount of it to the NFL Draft. This is a much different Georgia team than we saw last January when they took down Alabama. The difference-maker in this game will likely be the quarterback play from Oregon. Is Bo Nix really poised for an underdog win against Georgia? This Bulldog defense will once again be legit and I am not overly confident in him stamping an epic debut for the Ducks. I like this Oregon team, but not in this spot in the first game of the season. Prediction: Georgia 35 Oregon 21

No. 7 Utah vs Florida

Don’t look now but plenty of national pundits believe that this is a year where Utah could make some serious CFP noise and get the Pac 12 back into the national title conversation. This team lost a heartbreaker to the Buckeyes in the Rose Bowl last season and brought back a lot of that same talent. The Gators are entering a new era with new coach Billy Napier leading the charge and he has been a recruiting machine. Whether or not those tactics will bring success with his current roster on the field in year one remains to be seen. Utah lost some bad games on the road last year and playing in Gainesville where the crowd will be lit up for a new era isn’t going to be easy. The Pac 12 loves to let us down, and I am feeling upset. Prediction: Florida 30 Utah 25