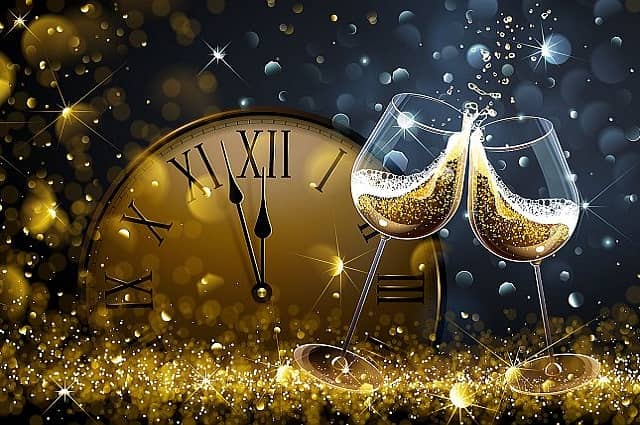 It’s about time to pack up 2022 and forge ahead into 2023. Not feeling up to a New Year’s Eve party this year? Nothing wrong with staying home and binge watching movies and football games. And there’s plenty of traditions for ringing in the new year without leaving the comfort of your recliner.

The Spanish have the perfect tradition for welcoming the new year from your couch. Don some red underwear and eat 12 green grapes right before the stroke of midnight. With each chime of the clock, you must pop another grape in your mouth (chew fast!). Each grape symbolizes a month, and successfully eating all 12 promises a lucky year ahead. We have no idea what the red undies are all about, but as sports fanatics, we appreciate the value of lucky underwear.

A classic American tradition. Celebrated since the early 1900s, the ball did not make its debut in the countdown ritual until 1907. Since then, it’s become a staple of New Year’s Eve celebrations around the globe. At least a 100,000 people flock into the New York square and millions more are glued to TV screens as the illuminated, 12-foot ball covered in Waterford crystals slowly descends as the clock ticks down to midnight.

In the Southern United States, Hoppin’ John constitutes a traditional New Year’s dish all about good fortune. This simple, delicious concoction of peas, pork, and rice has been around since the 1800s, usually accompanied by collard greens and corn bread. The peas symbolize coins, the collard greens represent cash, and the corn bread stands in for bricks of gold. For those who partake of this classic dish, it is believed to bring a prosperous year filled with luck.

All around the world, from the Antarctic to South Korea, people will be kicking off 2023 by jumping into freezing cold lakes and oceans. The tradition started in Canada in 1920 with a group of Vancouver swimmers who called themselves the Polar Bear Club. In the U.S., these plunges usually fundraise for charity. A Maryland event at Sandy Point State Park drew over 7,400 participants and raised $2 million for Special Olympics.

It’s not a New Year’s Eve celebration without noise. Before noisemakers and fireworks were a thing, people made their own joyful ruckus by banging pots and pans on their doorstep at the stroke of midnight, and many still do. Long ago, the making of noise at a threshold of the seasons was thought to drive away evil spirits—and that neighbor who never picks up after his dog.

In Greece, onions hang on front doors to symbolize rebirth and progress throughout the new year. On New Year’s Day, parents wake their children by tapping them on the head with the onion to pave the way for happiness, prosperity, and new growth.

7. Smashed Plates and a Leap

It may look like an act of vandalism, but not to the Danes. On New Year’s Eve, they throw their old plates and glasses against the front doors of those they love and appreciate to banish bad spirits and usher in good fortune. At midnight, they stand on chairs and literally leap into the new year for good luck. So, if you find a pile of broken dishware on your doorstep, it may look like a mess, but it could be a heap of admiration.

Believe it or not, New Year’s resolutions are said to have been around since ancient Babylonian times. Kinda makes you think as you write out next year’s goals that for approximately 4,000 years, people have been working toward achieving—and then ignoring—their resolutions. Perhaps that’s the real tradition.

In the Russian culture, they take New Year’s resolutions a step further. Before midnight, they write their wishes and dreams on a piece of paper, then burn it in a dish with a candle. Those ashes are carefully added to a glass of bubbly champagne and drunk one minute into the new year.

Ever wonder how the midnight kiss tradition originated? Some historians believe it traces back to ancient Rome’s Saturnalia celebration, a raucous good time full of dancing, alcohol, and kissing galore. The Scots do it one better. During Hogmanay, their new year celebration, they kiss everyone in the room to build a sense of community among both friends and strangers. And it gives the single folks some New Year sugar.