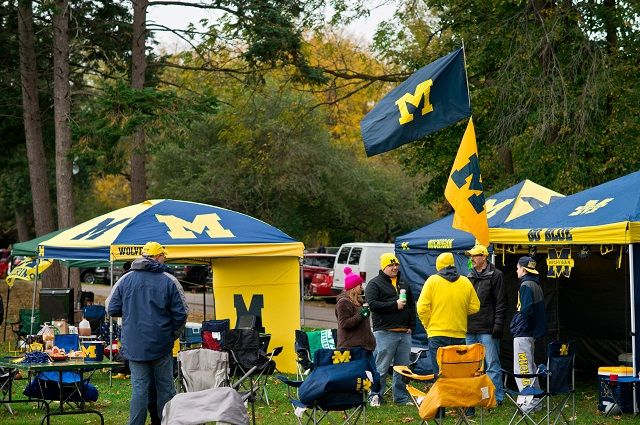 It may be known as the home of University of Michigan football, but Ann Arbor holds a trove of delights for all the senses. Plus Whirlyball.

Sometimes even the worst football experiences can lead to the best memories for faithful fans. That’s how it went for Matthew Altruda, a longtime Wolverines fan who remembers rooting for the Maize and Blue (and being won over by those iconic winged helmets) long before moving to Ann Arbor as a teen.

He and his son were in the stands during the infamous in-state rivalry game versus Michigan State in 2015. If you follow college football, you’re probably familiar with the final moments of this game as it’s one of the most memorable finishes in the sport’s history. University of Michigan fans were celebrating what looked to be a win, but a blundered punt in the final play resulted in a last-minute touchdown for Michigan State.

Like most Wolverine fans, Altruda and his son left the stadium with broken hearts, pausing their walk of shame only for a quick stop at the portable restrooms before heading home. That’s where a sad memory becomes a positive one, in the most unlikely of places, after one of the toughest losses he’d experienced. Altruda could hear his son crying in the stall next to him. And he was proud.

“He was so upset, but I remember thinking, ‘He’s here. He’s arrived,’” Altruda says. “When it hurts this bad, you know you’re a fan for life.”

It’s safe to say the team gained a lifelong fan that night. The father-son duo has attended 81 Michigan games together, even traveling to away games to experience the ups and downs of the sport they love in other college towns.

Altruda has been impressed by the gameday atmosphere at other schools, but none compares to the warm hospitality of his beloved Blue. “One of the things that really separates Michigan fans in general is that, while we do love football more than anything, at the end of the day, it’s a sporting event and we try to be good people who take care of away fans,” he says. 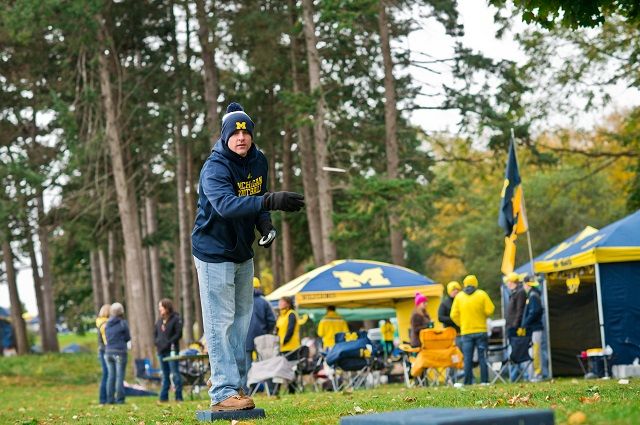 And take care of you, they do. If you’re here to tailgate, there’s something to suit every taste in Ann Arbor, or A Squared, as it’s called. If you’re looking for the party, head to State Street or the front lawns of the fraternity houses, where you’ll find loud music, cheap beer and students celebrating the football weekend. The sea of fans that forms around the intersection of State and Hoover streets may leave you feeling a bit claustrophobic, but it’s something everyone should experience at least once.

It’s all about location, location, location for a tailgate in A Squared, and one of the most popular, and probably more unique among college towns, is the Ann Arbor Golf and Outing Club. That’s right—thousands of fans fill the fairway, bringing with them their tricked-out tents and truck beds. There’s just something special about tossing a football before the big game with perfectly groomed green grass beneath your sneakers.

However, if you don’t mind trading it for asphalt, check out the scene in the Pioneer High School parking lot, a fan favorite since 1956, when the high school was built. It hosts a number of family-oriented pregame activities. Both locations are pay-to-park, but it’s worth it to be in the middle of the action and just a short walk from the stadium.

A recent tailgating addition offers a premium turnkey experience in Ann Arbor, complete with catering, tents, tables and TVs, all set up before fans arrive. As a tailgate, it’s shiny and new, but the location at Michigan’s storied Ferry Field is steeped in tradition. It was home to Wolverine football from 1906 to 1926, and, in 1935, legendary Jesse Owens set four track-and-field records here in what are commonly called “the greatest 45 minutes in sports history.” 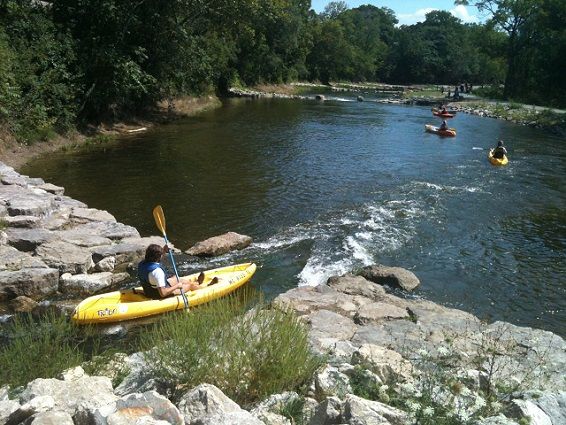 When you’re not tailgating, there’s more than plentiful walking to do in Ann Arbor, dubbed Tree Town, with its more than 150 area parks. Indoors, gather your group for a game of WhirlyBall (whirlyballannarbor.com). Played from specially equipped, electric bumper cars, it’s a combination of basketball and jai alai. While steering the incredibly maneuverable WhirlyBugs, each player tries to dodge opposing team cars and score in overhead baskets using the all-in-one, plastic-mesh scoops for throwing, catching and shooting.

If that doesn’t float your boat, rent a kayak and spend an afternoon on the Huron River, one of only 18 designated National Water Trails. It flows for 104 miles and attracts more than 2.5 million people each year. As one of only five trail towns on the Huron, Ann Arbor has been designated one of North America’s Best Paddling Towns by Canoe and Kayak Magazine.

More excitement? Tube the Argo Cascades, a man-made waterway featuring a series of whitewater rapids. Or Rolling Hills Water Park offers a park full of thrill rides. If the temperature drops, the park rents out cross-country skis for its miles of trails. Or head to The Cube and strap on a pair of skates to bulldoze and glide your way around one of their three ice surfaces. If you crave downhill skiing and snowboarding, it’s less than 30 minutes away.

Now you’ve worked up an appetite, Ann Arbor delivers a surprise. It’s a Midwest nirvana for foodies, rivalling cities three times its size, with 300 restaurants. It’s hard to say what inspired the food scene, but many point to local landmark Zingerman’s Deli (zingermansdeli.com), which has grown to become an empire of independent concepts since it opened in 1982. Long lines form almost daily, but towering sandwiches made with mouthwatering local ingredients are well worth the wait.

In the downtown area, locals joke that you can try cuisine from every continent on the globe. Ethiopian, Eastern European, Turkish—the list of international eateries in Ann Arbor reads like a world tour for your taste buds. Favorites include Korean-style fried chicken at Seoul Street (eatseoulstreet.com) and Cuban street food at Frita Batidos (fritabatidos.com).

Of course, it wouldn’t be a proper college town without the familiar student staples of beer, burgers, and pizza. Locals and nostalgic alumni return year after year to restaurants like Krazy Jim’s Blimpy Burger (blimpyburger.com) with made-to-order burgers hot off the grill since 1953. This treasured eatery has been featured on foodie shows like Man vs. Food and Diners, Drive-Ins and Dives. 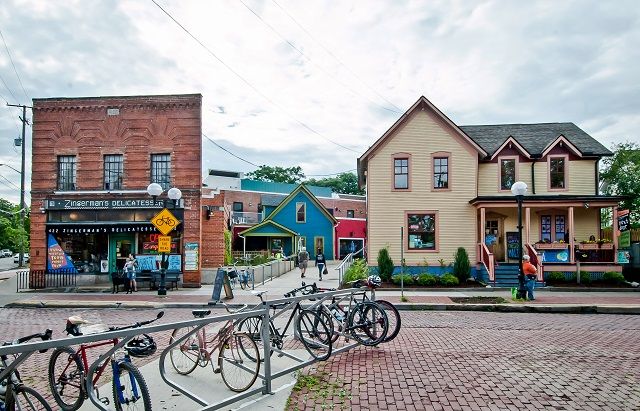 Once you’ve had your fill, Ann Arbor presents you with another type of feast for your senses. Their vibrant downtown arts community is home to dozens of inspiring art galleries, 30 independent bookstores, and a fair share of truly impressive museums, including the University of Michigan Museum of Art (umma.umich.edu), one of the largest academic art museums in the country. Its comprehensive collection includes more than 21,000 works from around the world.

“Ann Arbor is very open to new things and they like to try something they haven’t tried before, something they haven’t seen before,” says writer Jenn McKee, who’s covered arts in the area for the last 15 years. “I think the community character is part of what dictates why the art scene is so dynamic and so interesting.”

For theater, M-U gets consistently ranked as one of the best musical theatre programs, showcasing student performance well on their way to Broadway. Also housed on campus, though not part of the school, the University Musical Society (ums.org) is one of the oldest performing arts presenters in the country. Celebrating its 140th season, UMS brings in world-class artists, orchestras, and dance and theatre companies year-round.

If you prefer your action on-screen, catch a show at the Michigan Theater (michtheater.org), a beautiful 1920s movie palace, or at the recently renovated Art Deco-inspired State Theatre just a block away. Time your visit right, and you might find yourself in the middle of North America’s oldest experimental film festival, the Ann Arbor Film Festival (aafilmfest.org). 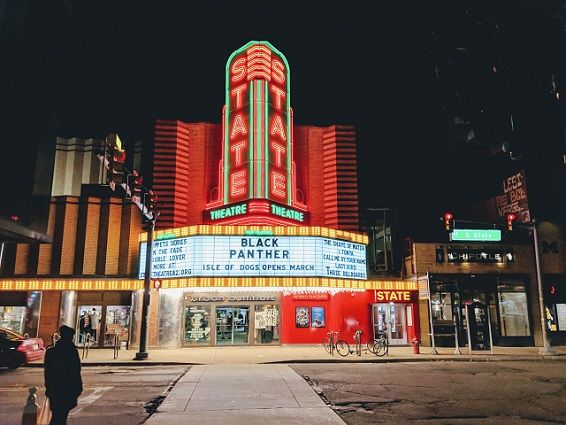 Make it a Stop

For sports lovers, Ann Arbor should lure you in just to watch top-ranked college football in the Big House, the second largest stadium in the world. But add in 10 public golf courses, shooting rapids and skiing, and you can find yourself playing as well as watching sports here, all while among fine eateries in a culturally imbued downtown. And when you’re ready to not be quite so serious, there’s always Whirlyball.