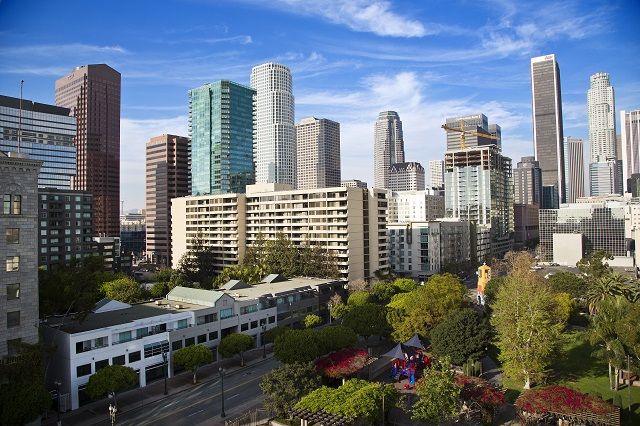 Los Angeles. Vibrant, jam-packed, always in motion and home to not just one, but two, professional teams in every major sport.

Forget Hollywood and the hullabaloo that surrounds it. In Los Angeles, you could rightfully say sports are king—but the Kings only touch on one of the area’s professional hockey teams (heh heh). Just down the road sits their Anaheim counterparts, the Ducks. And that’s how it works in this vast, pulsing metropolis. Two of everything. The other four men’s major pro sports also host a pair of teams, as well as a Women’s National Basketball Association (WNBA) squad, making 11 pro teams in one mega-city. That means, nearly any time of the year, L.A. has a game on. 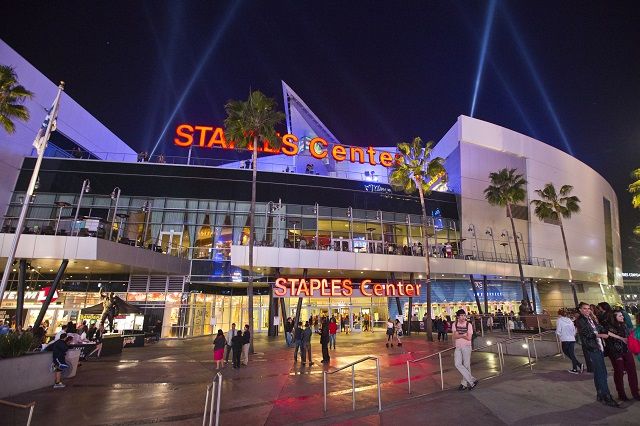 Sports have had a place in southern California for generations, and 10 years ago, several of them found new life with the introduction of L.A. Live. The downtown entertainment district surrounds the Staples Center, home to the NHL’s Kings, the National Basketball Association’s Clippers and Lakers, and the WNBA’s Sparks.

L.A. Live now thrives as a hub for pre- and post-game activities for each fan base. Spread over 5.6 million square feet, the entertainment zone includes, yes, restaurants and bars but also movie theaters and concert halls for the less athletically minded. Head to the game early to tour the Grammy Museum (grammymuseum.org) or check the Live L.A. event calendar (lalive.com/events) to plan a full weekend.

Hungry? Well, yeah—you’ve got to fuel up before the game. This one-stop shop offers more than 20 eateries. And don’t think it’s all about food. Lucky Strike (bowlluckystrike.com) combines a lounge atmosphere with classic bowling and high-end eats.

If pre-game drinks are on your mind, you’re in luck. Check L.A. Live’s happy hour guide for a look at the best bargains at all the area watering holes. If your adrenaline is pumping from a victory, you may not want to head home just yet. Consider booking a room at one of the district’s four hotels.

Thanks to L.A. Live’s central location, you’re not only in walking distance to four teams, you’re also a short Uber ride from the metropolis’ other sports facilities. 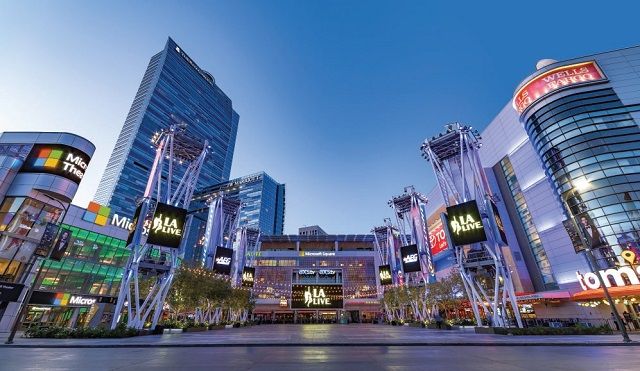 It doesn’t matter if you’re in town to see college or pro football—University of Southern California Trojans or the NFL Rams—or if you couldn’t care less about football. The Los Angeles Memorial Coliseum is a site to behold. “The Greatest Stadium in the World,” as it’s known, is currently home to both of those teams. The Rams are only temporary, though, until the projected 2020 completion of Los Angeles Stadium at Hollywood Park. Hey, if these are your teams, South Lawn is a perfect place to tailgate.

The 95-year-old stadium has hosted two Olympics, with a third slated for 2028, and dozens of other historic sporting events. Visit the Peristyle arches on the east end of the stadium’s exterior for a look at the Olympic cauldron and bronze statues, two of the structure’s iconic features.

Then tour the Memorial Court of Honor. Its 61 commemorative plaques recognize events and individuals from the Coliseum’s history—an honor roll, of sorts, for this sports icon.

And plan to come back. The Coliseum is currently under renovation, its first major work in 20 years.

Although Los Angeles is known for its spectacularly bad traffic, it’s relatively easy to pre-game downtown and then rideshare to the stadium of your choice. Only a few miles separate Dodger Stadium, the Staples Center and Banc of California Stadium, home to Major League Soccer’s Los Angeles Football Club. You’ll have to plan a bit more to reach the MLS’s L.A. Galaxy and the NFL’s L.A. Chargers, both of which play at the StubHub Center south of town. But hey, it’s possible.

And downtown is hopping these days. Start with The Dankness Dojo, a must-visit for beer fans (moderntimesbeer.com). The site houses the Modern Times brewery’s research and development facility, so you’re likely to indulge in beers that others haven’t yet tasted, along with their featured 30 beers, as well as guest beers and wine, plus Modern Times coffee. They’re every bit as serious about food as they are beer.

Mikkeller DTL.A. (mikkellerbar.com) boasts a load of raves, with dozens of beers on tap and gastropub food to satisfy almost any palate. Vegan? Most tailgates and pre-game spreads don’t cater to you, we know, but you’ll find plenty of options here. Carnivore? Mikkeller has you covered.

Or take a more casual, historic approach to dining with a stop at Grand Central Market (grandcentralmarket.com). The 101-year-old market houses dozens of vendors from 8 a.m. to 10 p.m. daily. It’s the perfect pre-game option for a big crew that can’t agree on where to eat, or a more casual gathering with kids in tow. 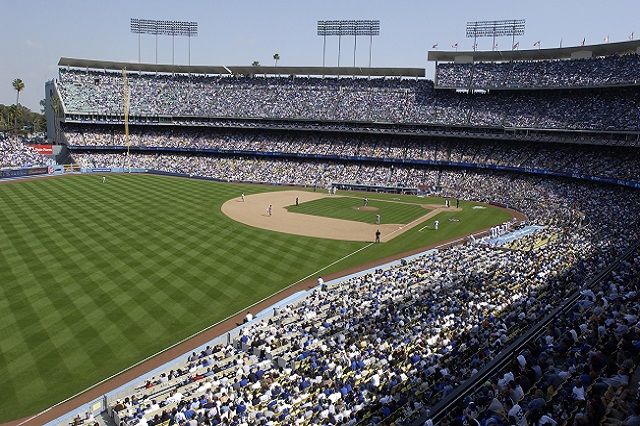 Both teams’ fans flock to Noble Ale Works (noblealeworks.com), a nearby brewery whose popularity has resulted in a significant expansion. Frequent food truck visits make this a smorgasbord of options before many games.

The Phoenix Club (thephoenixclub.com) is a short drive or manageable walk from both stadiums, and it’s sure to delight. The casual German bar offers beer and pub food, and Sunday breakfast is a treat. Looking for a place to unwind after the game? A used ticket stub from either Anaheim team will get you happy-hour prices all night.

JT Schmid’s Restaurant and Brewery (jtschmidsrestaurants.com) is another Anaheim fan favorite. It’s ideally located between the Ducks’ home at the Honda Center and Angel Stadium. JTs is spacious with plenty of televisions to keep you riveted to games around the nation.

Regardless of which team draws you to Los Angeles, this hopping, sports-mad metro will provide plenty of food and entertainment for a memorable game-day experience.