Everything Runs Well in Eugene 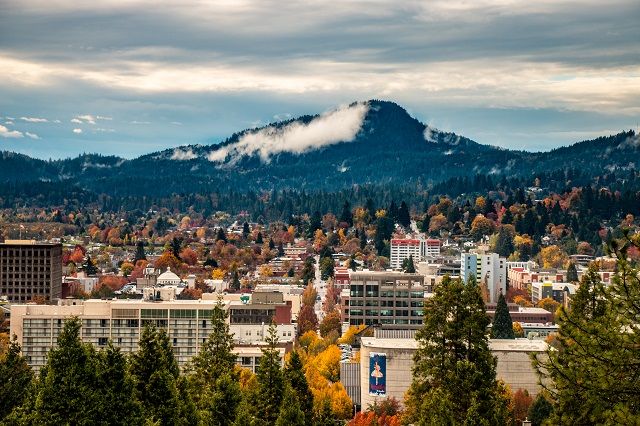 Everything Runs Well in Eugene

It may appear to be a sleepy college town with a rainy reputation, but Eugene, Oregon, is home to an incredible sports history—and an array of unique activities that make it worth a trip.

Eugene, about 110 miles south of Portland, doesn’t bear the nicknames Track Town USA and Running Capital of the World without reason. While football stadiums reign as the sports cathedral of many a college town, it’s Eugene’s historic Hayward Field track stadium at the University of Oregon that gives that college’s football arena, Autzen Stadium, a true run for its money.

Hayward has played host to numerous NCAA Track and Field Championships and National Masters Championships. The U.S. Olympic trials have been held six times at Hayward. In August of 2021, the stadium will host the International Association of Athletics Federations (IAAF) Track and Field World Championships. This 10-day competition will be the largest sporting event in the world that year, and the first time the championships are held in the United States. In preparation, Hayward Field, built in 1919, is undergoing a dramatic renovation.

In Eugene, track and field athletes are celebrated as Olympians. And many of them are. The list of Olympic athletes who have trained in Eugene is lengthy and includes perhaps Oregon’s best-known, native-born athlete, Ashton Eaton. Eaton is a two-time decathlon gold medalist and an IAAF world champion in the event, so he has rightfully earned the moniker often bestowed on decathlon champions—World’s Greatest Athlete. Before his retirement in 2017, he received his second gold medal at the 2016 Olympics in Rio de Janeiro, where 18 other Ducks alumni competed in track and field events. In fact, the university had more Olympic athletes at the 2016 games than 113 countries.

The University of Oregon is to track and field what the University of Kentucky is to basketball, and that’s thanks in large part to three sports legends: Steve Prefontaine, Bill Bowerman and Phil Knight. An Oregon Coast native, Prefontaine signed on with the UO track and field team in 1969 and won seven NCAA titles, competed in the 1972 Olympics, and accumulated 11 track records before graduating. Though his life was tragically cut short by a car accident at just 24 years old, Prefontaine’s influence on the sport remains evident. Since 1973, Eugene has hosted the premiere Prefontaine Classic, the longest-running outdoor invitational track and field meet in America. The Steve Prefontaine Memorial Jogging Trail, or Pre’s Trail, is a bucket-list item among locals and visitors alike.

Prefontaine’s former coach, Bill Bowerman, has an undeniable legacy in the running arena, as well. He served as head track and field coach from 1949 to 1972 and led the Ducks to unprecedented levels of success, all while Nike, the athletic shoe company he cofounded with UO track and field alum Phil Knight, grew to become the sports giant we know today. Oh yeah, and he’s also credited with introducing jogging to the United States. For runners, all roads lead to Eugene. 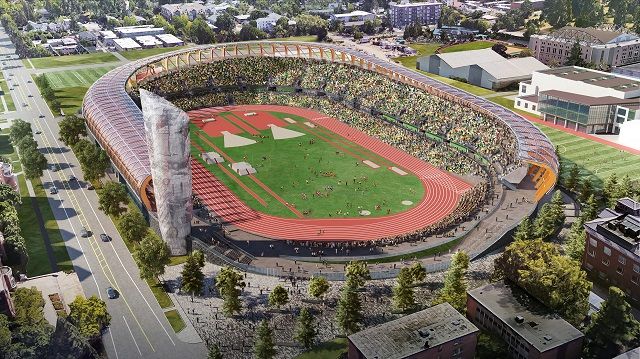 Water Off a Duck’s Back

Though the University of Oregon Ducks’ uniform is ever-changing (thanks to that stellar Nike connection), there’s one thing that remains the same year after year in Autzen Stadium—a strong sense of community.

“Almost everyone who walks in, you feel like you know them,” says Alicia Heer, longtime tailgater and University of Oregon alum. “It’s just that kind of small town. Maybe it’s just the fact that I’ve been tailgating here for over 20 years, but you start to see the same familiar faces. I have friends that I call my ‘seasonal friends’ because I only see them during football season. It’s a community within a community.”

Despite holding fewer than 60,000 fans, Autzen consistently ranks as one of the loudest (and best) college football stadiums in America. Ducks fans show up clad in their brightest green and yellow—rain or shine. Heer jokes that the Ducks aren’t a fair-weather fan base, which is literally true. A rainy game day is par for the soggy course.

“There have been some games when it rained so much that my pockets filled with water, but most of the time it’s just a steady rain and you don’t even think about it, especially when we’re winning,” laughs Heer.

After umbrellas were banned from the stadium in 1990, PA Announcer Don Essig delivered the signature catchphrase he still famously says, 28 years later, before every home game, “It never rains in Autzen Stadium.” Ironically, an 11-year streak of rain-free games followed.

When it does rain, Oregon tailgaters are prepared. They utilize the usual tailgating fare—RVs, tents and trailers—but what sets this school’s tailgating experience apart is its indoor element. The Moshofsky Sports Center, or The Mo, as it’s affectionately called, houses a full-length football practice field, running track, and Duck Shop retail outlet. Throughout the year, it hosts eight of the school’s 16 intercollegiate sports.

But on Saturdays in the fall, The Mo welcomes nearly 5,000 fans for an indoor pregame party like no other. Grab a beer and a bite to eat before lining up for the March to Victory, a tradition in which the marching band, cheerleaders and football team pass through the sea of green and yellow, stopping for high fives and selfies with fans young and old along the way. 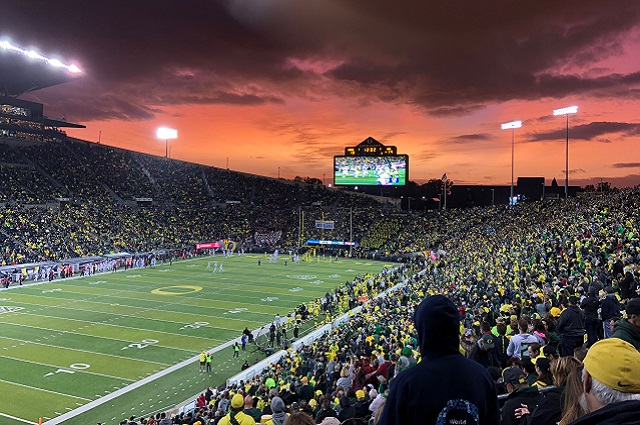 Open any closet door in Eugene, and it’s likely you’ll find rain gear, a UO jersey and hiking boots. The nearby natural wonders of the area are its greatest attraction for outdoor enthusiasts. In the warmer months, plan a white-water rafting trip or guided fishing excursion on the rushing McKenzie River. Visit pristine Waldo Lake—a natural alpine lake in the nearby Cascade Mountains—for sailing, canoeing and paddle boarding.

Those who prefer to explore the area on two wheels should cycle the family-friendly Row River Trail that meanders past historic covered bridges in Cottage Grove. If biking off-road is more your style, opt for a 48-minute drive to neighboring Oakridge, known as the mountain biking capital of the Northwest thanks to its 300-plus miles of world-class, singletrack trails.

The sandy beaches of the Oregon coast lie about 60 miles straight west from Eugene. Enjoy the usual seaside activities or something more adventurous, like a dune buggy tour of North America’s most expansive coastal sand dunes or sandboarding—just what it sounds like—at Sand Master Park, the world’s first sandboarding adventure park.

For those more comfortable with their feet on the ground, Eugene boasts hiking as a year-round sport. Ancient lava beds, old-growth forests home to 500-year-old trees, peaceful canyons, lakes and dramatic cliffs—all are found in this hiker’s paradise. Spencer Butte is the city’s highest point, climbing to 2,058 feet at its summit. A moderate to difficult, 1.7-mile loop to the top reveals panoramic views of the Willamette Valley, Fern Ridge Reservoir and the snowcapped Three Sisters mountains in the distance. On a clear day, you might even spot the giant yellow “O” on Autzen Stadium.

After hiking, biking, running or cheering in the stands, you’ll need a place to quench your thirst. The entire state is recognized for local, handcrafted brews, and the Willamette Valley produces the second largest quantity of hops in the U.S. Beer aficionados will appreciate Eugene’s abundant breweries, beer gardens and growler fill stations. The sparkling clear, clean water of the McKenzie River, fed by mountain springs and melting snow, is a celebrated brewing ingredient in Eugene.

The Portland metro area, with its 84 breweries, sometimes overshadows the smaller cities in the state, but if you want to experience Oregon’s craft craze in a more laid-back, hometown atmosphere, stick to Eugene. Besides, this city of 168,000 people is in close proximity to 49 breweries, so you’ll have plenty to choose from.

Hit the Eugene Ale Trail, which, in true Eugene fashion, makes even brewery hopping a bit of a competition. Download the Eugene Tasting Trails app and collect stamps from eight of the 25 breweries on your digital passport to win Ale Trail souvenirs. Don’t worry—many of the craft-beer tasting rooms are close enough for a pub crawl.

The eccentric Whiteaker neighborhood has the largest number of breweries within walking distance. Begin your adventure with an award-winning beer at Ninkasi Brewing Company, the 38th largest craft-brewing company in the country. Your next stop should be Hop Valley Brewing, known for its bitter brews like Citrus Mistress IPA, Alphadelic IPA, and Alpha Centauri Imperial IPA. The tasting room has 25 Hop Valley beers on tap and a 12-foot projection screen for viewing beer’s best pairing—sports. Hungry for more? From vegetarian poutine—fries and cheese curds topped with a brown gravy—to barbecue pork sandwiches, the pub grub menu at Falling Sky Brewing House can satisfy everyone.

Whatever your reason for visiting Eugene, lace up your Nikes and get here quick. Sports abound, the scenery is gasp-worthy, and if it does rain, it’s the perfect reason to duck into the nearest brew palace and refresh yourself as well. 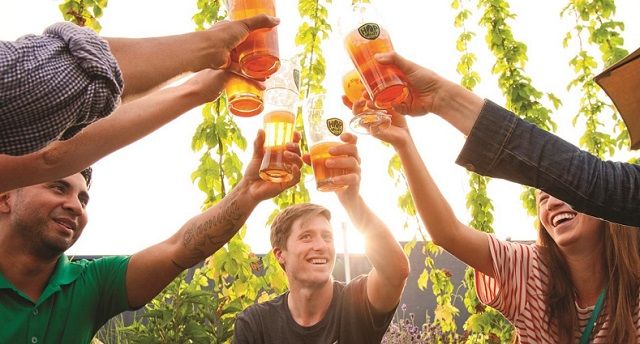