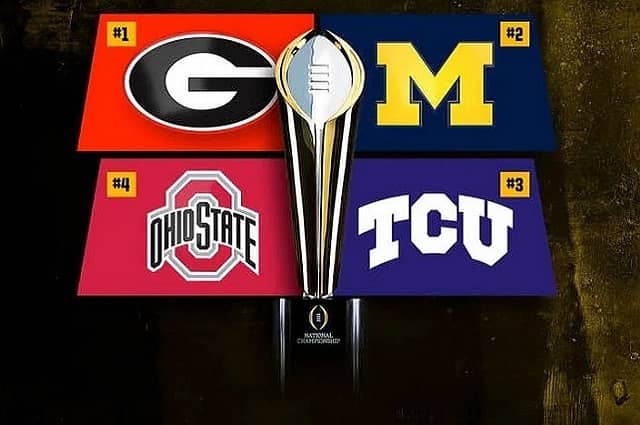 Week in and week out, we have been predicting and writing about the College Football Playoff. All season we’ve hung onto each, and every game of a ranked opponent and it has all come down to this. The CFP rankings are final, and the stage is set for the four teams battling in the semis as they hope to play for a National Championship.

Number one Georgia is facing off against number four Ohio State in Atlanta. It’s essentially a home game for the Bulldogs who always play competitively in Mercedes Benz Stadium. Georgia is looking to repeat as national champs as their patented tough defense showed up again this season despite losing so much talent to the NFL. Ohio State needs to score at least 27-30 points to stay competitive in this game because on top of their great defense, the Dawgs also have a powerful offense that’s led by Heisman finalist Stetson Bennett.

There is a lot of experience in this spot for Georgia which is invaluable when it comes to college athletes. The last time that Ohio State took the field, they were blown out at home against their archrival Michigan in embarrassing fashion. For Ohio State, you can look at this game one of two ways: they are angry and ready to fight, or they were outed as frauds and their confidence is tanked. The top three CFP teams are strong, but the drop off is significant after that and Georgia will likely expose that point.

There is far too much experience and defensive prowess in this game to stay as close as it needs to be for Ohio State to win. Unless something goes off the rails, this is an open and shut case. Prediction: Georgia 30 Ohio State 17

This should be the better of the two games with two opponents who are much more similar. The Horned Frogs have been the best story in college football this season. Sonny Dykes was brilliant in his first year as head coach and I personally believe that Max Duggan should have been this year’s Heisman winner.

We could have a real shootout on our hands in this game as both TCU and Michigan boast explosive offensives. The offensive nod goes to TCU, but Michigan certainly has the defensive advantage. Michigan is going to run it and run it a lot. They rank fourth in the nation in time of possession and with the emergence of J.J. McCarthy as one of the best QBs in the country, they could have some big plays off play-action.

My only concern in this game is TCU’s recent struggles. They barely held on against Baylor in the second to last game of the year, winning in chaotic fashion as time expired. In the Big 12 Championship game, they had to mount a comeback against Kansas State just to be stopped in overtime. Michigan is a good ball club with a bad taste in their mouth from last season. They will come out hungry. Prediction: Michigan 35 TCU 31