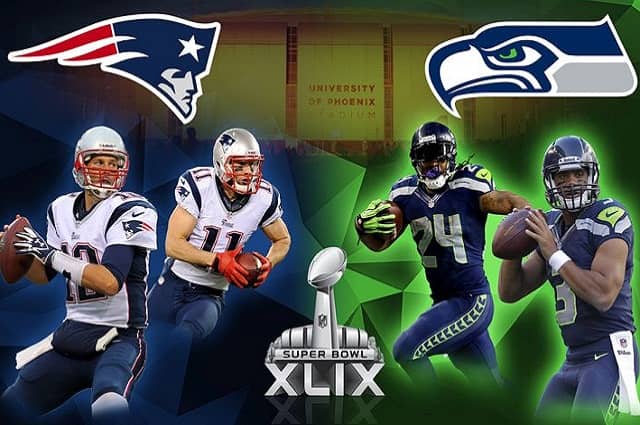 The Super Bowl is the most exciting game in all of sports and this week we get to watch the 55th iteration of the great game. It will be an epic contest between Tom Brady and Patrick Mahomes and their respective teams, the Tampa Bay Buccaneers and the Kansas City Chiefs. While both QBs have won a Super Bowl, it is Brady who has played in nine Big Games and won six of them. He is the greatest quarterback in NFL playoff history. There have been some incredible Super Bowls, including some with Brady, and we are here to break them down for you. Here are the Top 5 Super Bowls in NFL history.

This was the first Super Bowl to feature two teams representing the same state.  The Buffalo Bills were making their first Super Bowl appearance after finishing the regular season with a 13–3 record. The led the NFL in points scored with 428. The Giants were playing in their second Super Bowl.  The Giants also posted a 13–3 regular-season record that featured a defense that allowed a league-low 211 points.  You’ve seen the reply of the end of this game over and over again.

The Bills had a chance to win, but Scott Norwood just missed a 47-yard field goal in the last seconds of the game to secure the win for the Giants in an epic Super Bowl. This was the second Super Bowl victory for coach Bill Parcells who “retired” following the victory.

This was the first Super Bowl that featured a rematch of a previous one, and both teams were attempting to be the first club to win a third Super Bowl.  The Pittsburgh Steelers defeated the Dallas Cowboys 21-17 in Super Bowl X three years earlier. They were now going for their third Super Bowl championship in five years.  It was 35-31 in the closing minute of the game when the Cowboys attempted a second straight onside kick attempt.  However, the effort failed, and the Steelers secured the win.  It was the first time in Super Bowl history that the losing team scored 30 points. Steelers quarterback Terry Bradshaw completed 17 of 30 passes for 318 yards and four touchdowns. He was named MVP of the game. This was truly one for the books.

This was one of the most memorable Super Bowls for a younger generation of football fans and the first Super Bowl in which Tom Brady appears on this list. Brady found himself down 28-3 to the Atlanta Falcons midway through the third quarter, then things changed quickly. The Falcons got conservative and the Patriots scored 25 unanswered points to tie the game and send it to overtime.  This marked the first time that the Super Bowl went to overtime. The Patriots won the toss and elected to receive.  Brady drove the team 75 yards in only nine plays for the winning touchdown. The Falcons offense never touched the ball in overtime.  This was the greatest Super Bowl comeback of all-time and undoubtedly the most impressive win of Brady’s career.

Only one team had gone undefeated in NFL history and won the Super Bowl.  After this game, the same rang true. It appeared that no one could stop the New England Patriots, especially not the Wild Card New York Giants.  But we all know how this game went down.  Trailing 14-10 with just over a minute left in the game, Giants quarterback Eli Manning miraculously escaped being sacked and completed a pass to David Tyree, a reserve who only caught four passes all season. Tyree’s incredible catch went for 32 yards. Four plays later Manning found Plaxico Burress for the game winning touchdown. That loss ended the Patriots quest to join the 1972 Miami Dolphins as the only NFL team to win the Super Bowl with a perfect season.

The Seattle Seahawks were going for a dynasty in the mid 2010’s and they were oh so close to getting there before Pete Carroll made one of the most questionable decisions in NFL history.  The game was tied 14–14 at halftime. Seattle then built a 10-point lead to end the third quarter. However, the Patriots rallied to take a 28–24 lead with 2:02 left in the game. On the final possession of the game, Seattle marched down the field to the 1-yard line and instead of handing the ball to running back Marshawn “Beast Mode” Lynch, Seattle inexplicably threw a slant that was intercepted by Malcolm Butler and the Pats secured the win. It was one of the most intense and surreal endings ever and the greatest game in Super Bowl history.