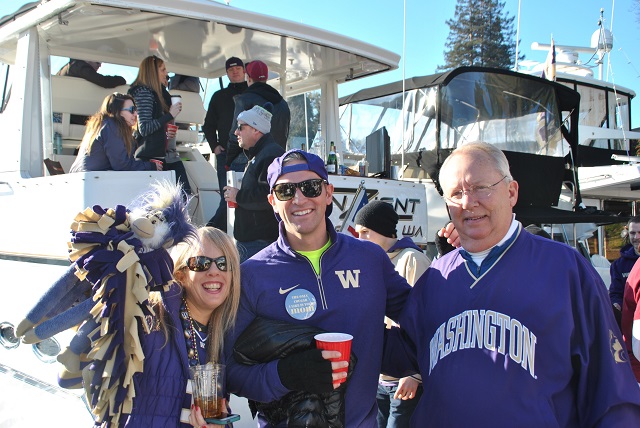 As game day dawns, fans in and around Seattle prepare for pregame festivities. Many fans head down to The Zone for a VIP tailgating experience without all the hassle of planning. Others have created their own tailgating groups such as The Dawg Sled. These groups are serious about their Husky pride and constantly find new ways to flaunt it. Thanks to their custom vehicle owned by Tyson Alexander, The Dawg Sled group is easily recognized.

But tailgating in Seattle isn’t limited to parking lots and fields. One of the hottest spots pregame is Husky Harbor and its unique “sailgating” experience. Starting early in the morning, the harbor welcomes fans on charter boats, luxury yachts, smaller vessels, sailboats, motorboats, speedboats and even a few braves souls in kayaks.

Boatless in Seattle? No problem. Local restaurants such as Ivar’s Seafood run charter boats where your ticket includes the boat ride and a pregame meal.

The floating football flotilla is a welcoming bunch with people often visiting each other’s parties. Shuttle boats transport fans to the stadium for a small fee, but many prefer to stay on the water.

Fans like their sports loud in the PNW, and Husky fans are more than willing to oblige. No third down would be complete without the stadium-thundering chant, “Go Huskies!”

But Husky fans don’t stop with simple cheering. Each time the Huskies score, be prepared for the shrill sounds of an actual air raid siren from WWII. Opposing fans hate this UW tradition which, of course, just makes Husky fans embrace it even more. Building on recent years of success, Husky fans are growing in numbers and fervor. With their appearance in the top four last season, expect the parties to be louder and longer this season.