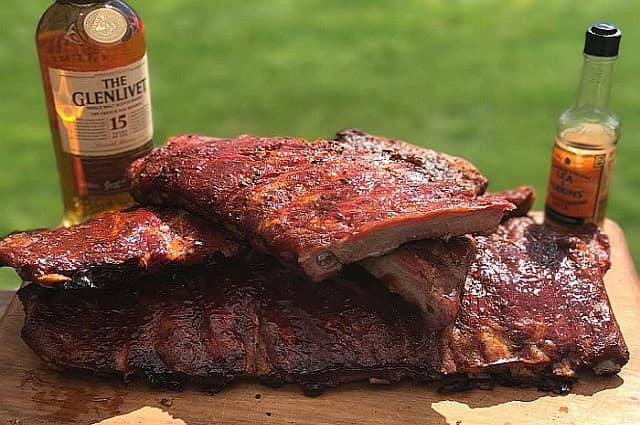 You’re planning to have a rib feast fit for a king, but do you go with pork ribs or beef ribs? And you have other questions as well, such as – how important is the trimming? which woods will work for your needs? should I smoke them or grill them? It’s simple: scour the barbecued ribs tips below from our friends at BBQGuys  and learn how to get the maximum payoff for whichever meat you’ve chosen.

An important early step in preparing pork ribs is to slice away the membrane (also known as the “silver skin”). Reason being? While smoke and rubs will pass right on through, it won’t break down and forces a tasteless chewiness layer that’s just plain unappetizing to eat around.

This is a little more open to interpretation. On beef ribs, removing the silver skin isn’t quite as mandatory as you might think. In fact, leaving it on your beef ribs will help to guarantee that the meat stays stuck to the bones. But it’s certainly not going to hurt anything if you remove it.

How to Smoke Pork and Beef Ribs

For pork ribs, preheat that smoker to about 225–250°F to hit that perfect low and slow point. As they’re always larger and fattier than pork, beef ribs can (and should) take slightly higher heats. Preheat those meatier cuts instead to 275–300°F. The precise length of time needed for your cook will vary greatly, depending on the physical characteristics of your ribs. Look to the individual recipe, but 4–6 hours is a reasonable expectation that covers many basic-level entrées.

How to Grill Pork and Beef Ribs

Similar results can be had on a gas grill! All it takes is indirect heat and investing in a smoker box. Follow the same rules for temperature and remove the smoke box after the first hour. For best results, keep larger bones closer to the heat source. For this style, grilling the ribs doesn’t differ all that much to smoking them — after all, we’re basically doing the same thing with different gear. But the heat itself will be more volatile, so you should pay higher attention to it over the hours.

The milder taste of pork leaves a lot of leeway for your more exotic flavors. Wood chips and chunks are no exception to the rule. Thus, your lightweight offerings still get plenty of representation in the result! Feel free to experiment with a wider palette than usual, and to greater effect.

In beef ribs, the inherently meatier taste enjoys being the center of attention — and it’s very good at it. Carrying on the pattern from your seasoning selections, choose woods that enhance the existing flavor, rather than competing with it. The resulting ribs will reward your confidence with very satisfied tastebuds.

This shortcut calls for wrapping the ribs in aluminum foil or food-grade “pink” butcher paper, which does capture moisture and cuts through the temperature stall later in the session. This will speed things along but minimizes bark and can leave your ribs mushier than wanted. We see the appeal, but firmly believe you’ll see much better results overall without relying on the quick fix.

If you want to make a killer rack of barbecued ribs, check out this award winning recipe from our friend Sterling “Smitty” Smith at Loot N’ Booty BBQ.