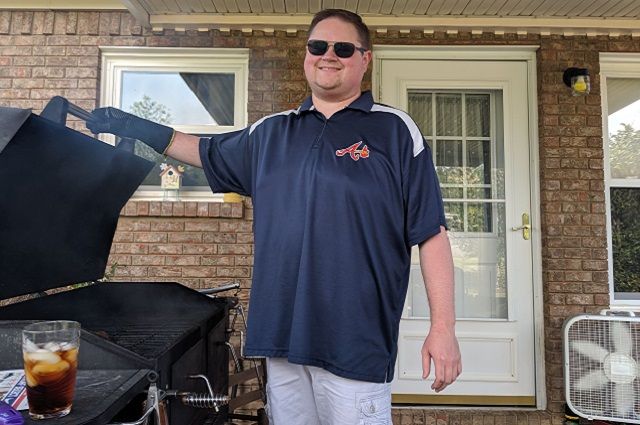 Steven Shreve, a healthcare consultant and bona fide nerd, says that if he was going to be a dinosaur, he’d have been a T. rex. Just for all the meat. But one that grilled. Even before he started grilling for himself, he’d gravitate toward all the restaurants that cooked with wood fire. Then about 10 years ago, his father-in-law gave him a grill, and he discovered that “it’s a lot of fun to play with fire,” he says. “I just ran with it.”

What was the big draw to grilling?

It takes a lot of skill for grilling and there’s a real art to it, especially now that I’m diagnosed with kidney disease. I have to change the way I cook. It’s like a whole new world. I have to develop a way of grilling and barbecuing that doesn’t involve huge amounts of salt.

How’s it going without salt?

I feel like I’ve become pretty successful at it, because everybody I cook for hasn’t mentioned the salt. You start to taste your food in a different way when you take the salt out of it. It may seem weird, but you get a more natural palette. You’re tasting more of what you’re eating.

So what replaced the salt?

We didn’t look to replace the salt, we just pumped up some of the other spices and flavors we would normally use. Usually instead of being salt-based, they’re more paprika-based now. We use a smoked paprika. Even on its own, it’s very delicious.

It’s not a one-to-one swap — salt for paprika — it’s just the main flavor that substitutes. I think paprika from a spice point of view is strong like salt. If you use too much, it will overpower the whole mixture. Whereas with a more subtle seasoning, if you do not use plenty, you don’t even notice it’s there. I think that’s why paprika’s a good replacement and good driver of flavor.

1. Cut them in half. They absorb more of the smoky flavor.

2. Put them cut-side down on the grates. Smoke 30–45 minutes over indirect heat.

3. Finish them over direct heat for less than a minute to get a nice semi-charred skin. It adds a different, subtle flavor.

4. Time crunch? Toss them right on the charcoal until they just start to blacken. Leave them whole. Takes only a few minutes.

5. Run smoked peppers through a dehydrator and they keep year round.

6. To control the level of heat, cut out the membrane (usually some hue of white) inside the pepper. It’s where most of the capsaicin lives, not in the seeds

What’s your favorite rub that you’ve made so far?

My wife usually makes the rub. I usually do the fun part. It’s a family affair. She used paprika and some brown sugar and a few other things and, after we cooked with it, it came out tasting like barbecue sauce. It was a dry rub barbecue sauce. We said that’s the one! We tried it on pork, beef, chicken. We put it on anything we put on the grill. It’s the best of barbecue dry rub but with the Kansas City barbecue sweet flavor.

With chicken, one of my favorite things is we actually take boneless skinless chicken breasts — which goes against everything conventional wisdom says — and we use just a little of our salt-free lemon pepper seasoning, and then I baste it with a butter sauce using a sprig of rosemary as my brush. I can’t take credit for that. I stole it from Steven Raichlen on one of his TV shows and, like everything, we modified it and made it our own. Any time we’re basting, I run to the garden right behind the grill and grab a sprig. You get some interesting flavor profiles that way.

Using the sprig kind of puts that hint of rosemary on whatever you’re basting. It doesn’t have to be included in the rub, where it can be very powerful. So it’s a nice way to put that flavor into something without overpowering your entire dish. Then what you can do is lay the sprig down on your grill grate and close your lid for a minute and it’s almost like you have a rosemary smoker. That adds a little bit of flavor too, and that’s really nice.

What if you want some heat?

My wife and I really love chili peppers. We grow our own. As we pick them, I smoke them in a big batch on my Pit Barrel, and then we put them in a dehydrator and store them. Then when we need it, we make our own chili powder out of those habaneros and jalapenos. We call that Smoked Fire Dust, because it will light you up. It includes a couple of other ingredients — touch of paprika, little bit of brown sugar, and a few other herbs. I use that almost every day.

We use a 5-4-3-2-1 matrix on this. For a single tri-tip, tablespoons are sufficient but can be scaled to suit any size dish. This is the basic formula. Don’t be afraid to experiment based on your own tastes.

Optional spices: (add any or all of the following for different flavor profiles)

Set the grill up for indirect heat at 225°–250°F. For indirect cooking on charcoal grills, arrange the glowing coals around the edge, placing the meat in the center. For gas grills, only light the burners on one side, placing the meat on the unlit side. You can also cook tri tip on a pellet grill.

Mix all the Sweet BBQ Rub ingredients in a medium-size mixing bowl using your fingers until all the brown-sugar clumps are broken up and the ingredients are well mixed.

Rub the tri-tip generously with the rub. Use a little olive oil on the surface of the tri-tip to help the rub cling to the meat, if needed.

Place the tri-tip over indirect heat (preferably of a charcoal/wood fire), shut the lid, and low smoke to an internal temperature of 110°F, 1–2 hours depending on the individual cut. Leave it alone, except to start checking the temperature after an hour or so. Remove from the grill and let the tri-tip rest very loosely covered with foil, 10 minutes.

Build up the charcoal/wood fire for direct grilling. For gas, turn the lit burners to high and place the meat over them. This part is about getting a good sear.

Finish off the tri-tip over direct heat to your liking. We cook to 135°F for a nice slight medium-rare, 3–5 minutes. If cooking to well done (not recommended), additional rub may be needed in the last few minutes of direct grilling.

No need to rest the meat again. Slice the tri-tip against the grain (just like a brisket) and serve with black beans and salsa.

What’s the myth about spices?

A lot of times, you see a recipe that says to put a rub on a piece of meat and let it sit overnight. It’s totally false with spices. They won’t soak into the meat like a salt.

So when do you apply it?

Put the rub on right before you put it on the grill and add more as you go, because some will burn off naturally.

Your advice to new spice dabblers?

You can’t go wrong from experimenting. You might find something you don’t like, but that’s okay. Even bad grilling is better than a lot of other food.