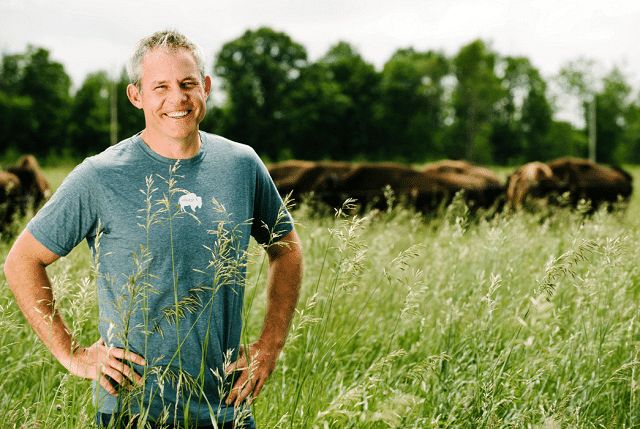 Sean Lenihan’s business feels like a throwback to the Old West. He raises bison. His 50-acre ranch sits in Cadott, Wisconsin, where “there’s so much wonderful grass, it’s like a paradise for bison,” he says. His little patch of heaven is just one ranch of several producing for The Honest Bison, the meat business he founded to humanely ranch and slaughter grass-fed-only bison, elk and deer. “When we realized just how hard it was to find unprocessed, humanely raised, quality meats in today’s markets, The Honest Bison was born,” he says. That was five years ago. Now they sell almost 100,000 pounds of bison a year.

Then there must be a big difference between beef and bison meat?

Cattle have been bred to store fat. They carry their fat intermuscular. That wagyu steak has all that marbling, right? Bison don’t store their fat that way. All of their fat is around their carcass and around their organs.

Obviously for some good reason?

There’s a really good reason for that. They still have to run 40 mph to evade a wolf. They’re still wild animals. Also they survive without any issue in minus 60-degree winters, so that’s why you need the fat as a coat and not as something in your muscles.

And how does that affect the flavor?

It’s all leading you into flavor. My rib eyes still have fat—it’s all in there, but you have to change the way you look at it. You’re not looking at the marbling in the steak, you’re looking for the lean muscle fiber—the meat plus the fat, not the fat in the meat.

When you eat bison, it’s leaner and it feels different. So you’re tasting more meat than you are fat. That taste is often described as richer and sweeter than beef.

1. Use a digital meat thermometer.

2. Don’t skimp. Cheap meat is a trap. The feed and the treatment of the bison influence the flavor.

3. Submerge any cut in oil in a bowl uncovered for 5 minutes while heating up the grill or skillet. Or rub it down with oil. That helps keep it moist, and the more fat you put on it, the better it tastes.

4. Use your favorite high quality cooking oil or tallow for the bath or rub down, whether olive oil, avocado oil, etc. I use bison tallow, and I serve it right on top of steaks, too.

5. Rare is best. That keeps it moist, tender and tasty. The more you cook bison, the drier it gets.

6. Let it rest 10 minutes before serving to allow all the juice to be pulled back inside.

And on the grill, do we treat it differently?

So then it needs marinades to stay moist?

No, just cook it less. It’s always best to eat it rare or medium rare, or else it will dry out. That’s also due to the high iron content. When you cross over 130 or 135 degrees, there’s a chemical reaction with the iron, and you’ll change the taste. Sometimes when people say it was gamey, it was probably overcooked.

Are we talking different cuts of meat then beef?

No. The same cooking rules apply for the same cut of the meat as beef, it’s just a different top end temperature. With a roast, I’d take it to 130 degrees, but I’m braising it and putting it in a crock-pot with other moisture.

What’s your favorite cut of meat on the bison?

Tomahawk steak. You get the fattiest steak that’s tender, and then you get the experience of having the bone cooked with it. It’s cut from the ribs. It’s basically a bone-in rib eye. Tomahawk’s just a cool name for it.

for the “California” Rub:

Sprinkle the meat with rub and massage tenderly. Cover and refrigerate at least an hour or longer. Remove from the refrigerator an hour before cooking.

Preheat oven to 300°F and prepare a hot charcoal grill or heat a gas grill to high. Place the roast on the grill and cook for 6–8 minutes per side or until an even char develops on all sides. Grill for no more than 20 minutes total.

Remove the tri-tip to a baking sheet or oven-safe dish. Cover with tinfoil. Place in the oven for 10–20 minutes, or until the internal temperature reaches 120°F (rare). Do not overcook.

Rest the roast on a cutting board for 8–10 minutes, during which time the internal temperature should increase to 125°F (medium rare). Slice against the grain. The center should still be distinctly red. This is perfect. Bison is supposed to be cooked less than beef and is ideally always served medium-rare.

Serve with grilled veggies of your choice and enjoy.

What about for elk and deer?

I love the elk New York steak. It’s cut from the New York strip steak, the strip loin. For venison, I like the filet mignon. It’s the most tender cut of the venison—also the venison tastes different than the other two.

Elk and bison are comparable to each other, but the venison has more of an earthy flavor to the meat. It’s a pure piece of meat protein—no fat or anything else. Just a very, very tender piece of muscle in the venison.

Is there a myth that needs to be busted about bison meat?

With all of these meats, the myth is that the meat can be gamey. It’s not. At least in ranch-raised. If it is, it’s chef error. In the wild, it’s totally possible that it was stressed and freaked out or ate a bunch of corn, and it’s malnourished. Then it might taste bad and gamey.

We don’t discriminate. But if you’ve never tried bison before, try it without your favorite rub first, so you experience the bison meat when there’s less things in the way.

How do you prep for the ideal bison steak?

With a steak, add a liberal amount of salt and pepper, maybe a little garlic, a little olive oil. That’s all you need. You’ll have the perfect experience.