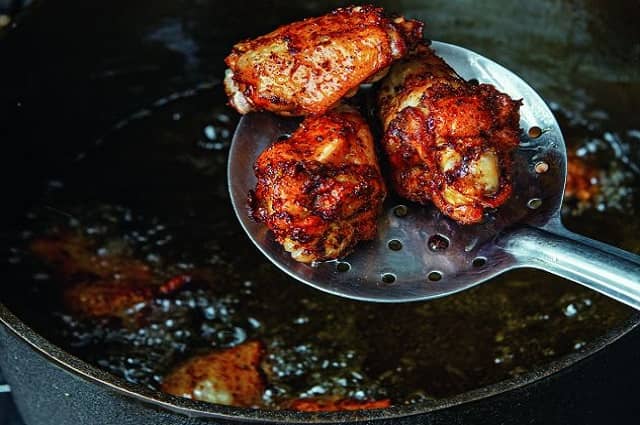 Reprinted with permission from Weeknight Smoking on Your Traeger and Other Pellet Grills by Adam McKenzie, Page Street Publishing Co. 2021. Photo: Ken Goodman

"Oh the enticement of crisp chicken skin. This time, that fried outer succulence veils the ultimate juicy, smoked meat. And it only takes a little over an hour. Or cook the wings quicker at 275°F with only a slight sacrifice of the smoked flavor."

½ cup poultry rub, such as The Blazin’ Bird by Whiskey Bent BBQ

Preheat your pellet grill to 225°F and turn on the Super Smoke feature if your grill has it.

In a large bowl, toss the chicken wings with olive oil until evenly coated. Sprinkle generously with the rub, being sure to cover all the sides thoroughly.

While the grill heats up, let the chicken wings sit with the seasoning for about 15 minutes. This allows the flavors to start to work their way into the meat. Then cook them in the hot grill for about 45 minutes, until the internal temperature reaches 140°F.

Meanwhile, in a Dutch oven, heat the vegetable oil on the stove over medium-high heat until it reaches 350°F.

Remove the chicken from the grill, tent with foil, and increase the grill temperature to 450°F. Very carefully transfer the Dutch oven with the hot oil to the grill.

Pour the buffalo wing sauce into a grill-proof saucepan or bowl and place on the grill to allow it to heat up while you fry the wings.

Fry the wings in the Dutch oven in small batches for 3–5 minutes, until the internal temperature reaches 175°F, which makes for a crispy skin and excellent bite. Remove them from the oil, drain briefly on paper towels, and transfer to a large bowl.

Toss the wings with the warmed sauce. Serve with blue cheese dressing, ranch, and your favorite veggies.