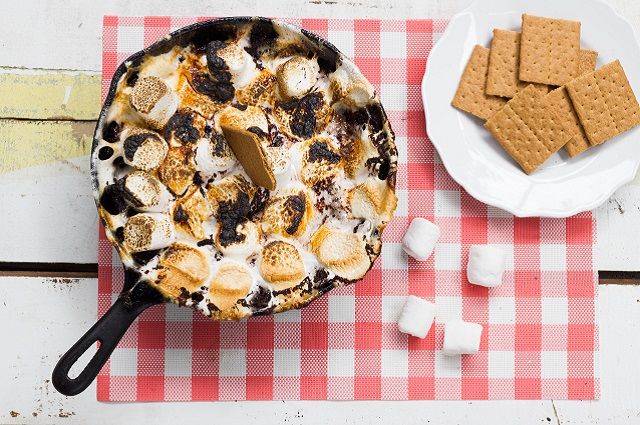 "Fact: Things just taste better when cooked in an old cast iron skillet. Another Fact: So here I am, telling you once again to light that grill up, this time so we can make some brownies! To simplify this recipe I used Julie’s Original Fudge Brownie Mix, which is super allergy friendly. The brownies are topped with a layer of toasted Dandies Marshmallows to send things over the edge."

Set up the grill for indirect cooking, and preheat it to medium. Spray a cast iron skillet with a non-stick spray.

Beat together brownie mix and nondairy milk, coconut oil and vanilla, until batter is formed. Spread batter evenly in the cast iron skillet.

Cover with marshmallows. Make a dome out of foil and cover the skillet. Make sure the dome leaves enough space for the marshmallows to expand without getting stuck to the roof.

Place the cast iron skillet on the grill and cover with the lid. Let cook for 10 minutes. Remove the foil and continue to cook for 5 minutes. Using a pot holder, remove the skillet from the grill and let cool. Enjoy!

Note:  Best when slightly undercooked so the brownies are still really fudgy and perfect for scooping up with some graham crackers.