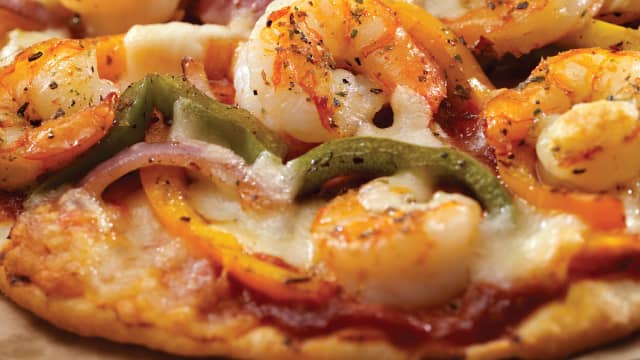 "This protein-packed pizza is rich in omega-3s, thanks to the shrimp. Serve with a mixed-greens salad for a quick weeknight dinner. "

Preheat oven according to instructions on pizza dough. Stretch pizza dough into a nonstick pizza pan or baking pan. In a skillet, toss shrimp, garlic, onion and bell peppers with olive oil and oregano, and sauté until shrimp is cooked through and onion and bell peppers softened, about 5 minutes. Spread remaining olive oil on dough, and top with shrimp mixture. Sprinkle cheese on top. Cook about 10 to 12 minutes, until crust is golden. Remove from oven, slice, and serve.