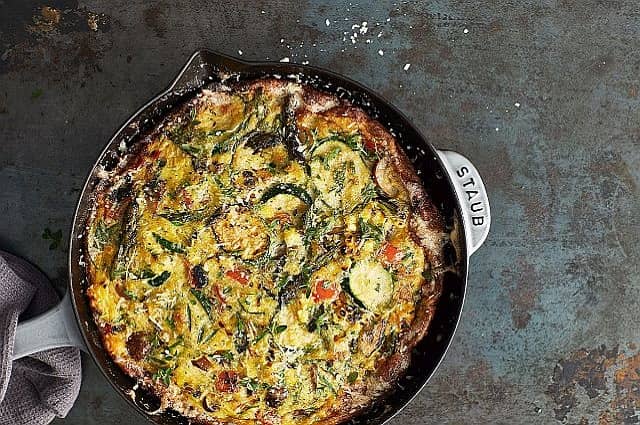 "Grilling 24/7 is one of my bywords and that means firing up the grill for breakfast and brunch as well as for dinner. Which brings me to a dish that’s welcome pretty much anytime, day or night—double-grilled vegetable frittata. Frittata is a cross between an omelet and a quiche, of course, and the first grilling (direct) imparts a smoky char to the vegetables. The second grilling (indirect) cooks the frittata itself. The strategic addition of wood to the fire imparts a smoke flavor that transports this Italian classic to the realm of barbecue. Note the use of a grilling grid, grill wok, or wire-mesh grill basket to grill the vegetables."

Grill/Gear: Can be grilled over charcoal or gas. For even more flavor, you can grill the veggies over wood or a wood-enhanced fire (see page 8). If you’re enhancing a charcoal or gas fire, you’ll need hardwood chunks or chips (unsoaked). You’ll also need a grill basket, grill wok, or grilling grid; and a well-seasoned 10-inch cast-iron skillet (a 12-incher will work, too, but the frittata will be thinner).

4 cups diced vegetables (any or all of the following):

What Else: You’ll want to use whatever vegetables are freshest and in season. I’ve made some suggestions for a summer frittata. You could also drill down to some classic veggie combinations, like asparagus and corn, mushroom and leek, or tomato and onion. In the cooler months, use winter vegetables like fennel, endive, broccoli or broccolini, and winter squash.