First off, there’s no one way to throw a Super Bowl party. Over the past 57 years of this annual phenomenon, Americans have customized the viewing of this game to suit their desires. There’s dude fests, family-centered gatherings, fantasy football carousers, and decorated-to-the-gills soirees. But they can all be good, and they’re everywhere. As in, 103 million people watching from everywhere. That’s notably more than the population of most all the European countries.

Last year, America spent an estimated $14.6 billion on celebrating during the game, according to the National Retail Federation. Per person, that breaks down to about $79 each. The biggest spenders are those ages 35-44 at an average of $123.26 while the lowest are those 65 and older at $40.97.

Ah, the TV. This is the be-all and end-all of a solid Super Bowl party. Bar none. Much can be forgiven, but lack of a crisp, clear view or constantly hearing “Turn it up! Turn it up!” is your death knell as a host. There’s no shame in renting or use this as an excuse for upgrading. The bigger the better is obvious.

What isn’t obvious is pre-party furniture arrangement. Everyone needs a seat with a view. Move the sofas into an L-shape, position bar stools behind the couch, and throw big pillows on the floor to mimic tier-seating. Just ensure that everyone can see the screen clearly, and has a place for drinks and eats.

“Having TV trays will help with placement of drinks and snacks to prevent spilling,” says Mady Dahlstrom with porch.com. Serving trays sitting on the carpet and ottomans can create temporary solid surfaces. “Some hosts actually remove all the unnecessary furniture and move in folding tables or chairs.” Bye, bye plants and Aunt Myrtle’s china cabinet. 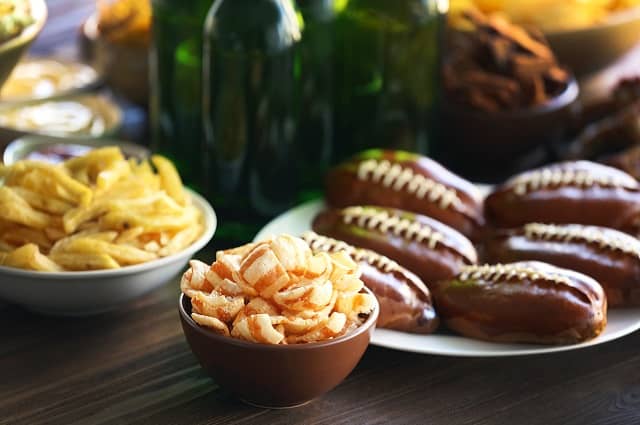 The menu is vital, but most hosts won’t ever hear a complaint with the comfort-food classics of wings, dips, chili and subs.

What most hosts don’t get right is the timing. “Think of the evening in five acts and space the food accordingly,” suggests the Food Network. They recommend a few room-temperature snacks for the first quarter, followed by warm appetizers in the second quarter, like meatballs and pigs in a blanket. Halftime is the main feast reserved for the brisket, pizza and gumbo. In the third or fourth quarter, bring out the sweets. “Have coffee at the ready from halftime onward for any early departers,” they add.

Or to ease the hosting headache, throw a potluck. “The most popular and greatest kind of Super Bowl party is one in which everyone brings something to the table,” says Sean Evans at complex.com. “There are no losers at this kind of party.” You can end up with a lot better selection and everyone is happy with at least one dish (and you have fewer to wash).

This sounds obvious, but apparently from the line of people at the liquor store during a game, it’s not. So have plenty of beer. Period. BYOB can keep everyone happy, but can create chaos in a larger group.

The safest way to avoid the party-crushing, mid-game beer run is the good ole keg. A mini serves up 55 12-ounce glasses and a full keg holds 165 servings. “Depending on where you live, use the cold temperatures outside as your cooler,” says Colleen Graham with The Spruce (thespruceeaats.com). “Just don’t leave it out too long in extreme cold because beer will freeze.”

“I’m a big fan of having a big beach cooler in the living room,” says Bon Appetit editor in chief Adam Rapoport. “Your fridge can’t hold all the beer you’re gonna want to drink, and you don’t want people getting up and walking in front of the TV to go get a beer from the kitchen.”

To give your party some panache or add humor, offer up a signature drink. Use a traditional recipe, like a margarita or Irish coffee, or devise your own. But make sure you can make a batch at a time.

And give it a name—something to do with one of the teams (Chiefskuccino), football (the Zone Blitz) or you (Smith’s Sucker Punch). Make one punch-bowl full—or whatever will give every guest one serving—then be done so people switch to less potent options and you’re not bartending during the game.

“But the most important thing for drinks? Buy twice as much ice as you think you’ll need. You will run out,” advises Andrew Knowlton with Bon Appetit. 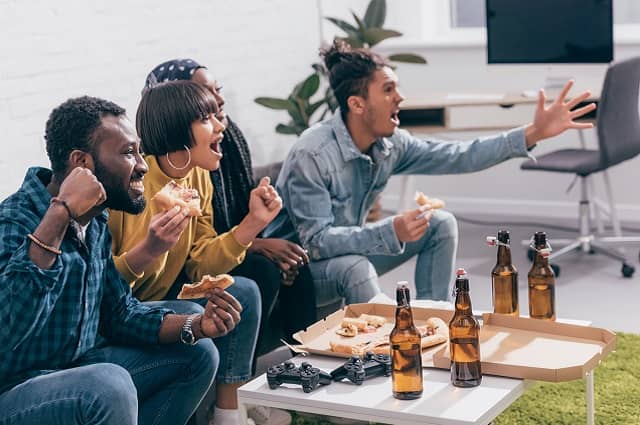 You may not be at the game, but you can feel like it, sans the bad views and mammoth hit to your credit card. Afterall, you have a crowd of fans. Even if it’s just three of you. Second, there’s a whole host of ways to keep everyone not just watching what’s on the screen, but personally invested in what happens.

To set the feel of a real game, get everyone to choose a team. This gets everyone invested and the back-and-forth lends far more energy to the party. “And this is one match-up when nobody will judge you if you make your choice based on jersey color, team mascot, player crush, or a coin flip,” says Alyssa Young with Reader’s Digest.

Give everyone a mini flag to throw on plays. If you’re a masochist, give out whistles. Give out a bit of cash as prizes for random things, like the score. Use the Super Bowl Squares rules and, before the game, draw a grid of 10 rows and 10 columns. Assign one team to the columns and the other to the rows. Have everyone write their name in one (or more) of the squares. Then randomly assign numbers 0 through 9 to each column and each row. At the end of every quarter, the square that lines up with the last digit of both teams’ scores wins the bucks.

Then there’s prop betting. “Prop bets are one of the best parts of the Super Bowl,” says Josh Schoch with Bleacher Report.  “It keeps every aspect of the four-hour event entertaining.”

Boring parts of the game get very interesting when winning’s on the line. “Hate to watch the postgame ceremony?” asks Schoch. “Not if you bet on who the MVP and coach thank first.” Or bet on how many times the half-time show messes up. Or the coin toss. How long the national anthem will last. One online betting site listed 52 prop bets for last year’s Super Bowl.

“My personal favorite is the color of the Gatorade bath after the game, but you can make small bets on literally anything,” says Schoch.

Rather than money, guests can put their livers on the line and drink based on what’s happening on the screen. Throw back a shot or a gulp when your team gets penalized, fumbles, sacked, or misses a field goal. A quick search on the internet a few days before the game will yield a crop of game-specific, often-hilarious ideas to look for that must result in taking a drink. Beware this may end up replicating the common childhood lunchroom scenario of liquid coming out of noses from the laughter.

Sure. Especially if the whole crowd are avid supporters of one side. But how much effort and dough you put into decorations depends on your crowd. And you. Some hosts go all out on the food and it’s a decoration in itself. Others redecorate their homes in all things football. But keep in mind that many a Super Bowl party guest leaves without ever remembering if there were decorations, so don’t sweat it if this isn’t your forte.

If the Super Bowl party is your annual family-based gathering, then skip this section. If you’re going for the all-out, deeply invested, live-for-the-gridiron group, then get tough about who comes through the door.

First off, no significant others who think this is a party for chit-chat or networking. It’s not. It’s a Super Bowl with drinking and eating.  No friends who only want to see the commercials. No one who will talk during the game.

The same with kids. “Kids don’t want to sit around watching football for four hours, and when they get bored they’re going to let you know,” Schoch says, as does every mom on the planet.

The ultimate host anticipates a load of traffic throughout the house and potential problems everywhere. “Keep towels nearby for quick clean up of any spills,” advises Graham. They can mop up anything and be tossed in a nearby basket (something else to bet on). “Make sure your bathroom is stocked with the essentials,” adds Graham. No one wants to ask for bathroom needs (or a plunger) mid-game.

Ultimately the best party means everyone ends up home safe. “A breathalyzer…can help ensure that no one makes any bad decisions and everyone gets home from game day safe and sound,” says Taylor Lauletta, a tech advisor with Business Insider.

The biggest mistake of Super Bowl party hosts? They’re too busy throwing the party instead of being a part of it. Do it all ahead, preferably the day before. Rest a bit that afternoon.

And give people a clear signal that the party’s over. Celebrity chef and Food Network star Sunny Anderson told Reader’s Digest, “Hold all the sweets until the two-minute warning and put dessert out then. And brew coffee. Something about the smell of coffee and sweets on the table denotes the end of anything, so people get it; the party is over and it’s time to go home.”

1. Set out a few colorful permanent markers next to the keg or bar, so people can label their cups.

2. Don’t touch the remote during the commercials. No muting or channel-surfing. Super Bowl ads are sacred entertainment in themselves.

4. Start no more than 90 minutes before kick-off. Otherwise, there’s too much drinking too fast and you can run out of food.

5. Put TVs, radios, smartspeakers, something in all the rooms where people may need to be during the game—like in the kitchen for refills or the bathroom.