Special Delivery! The Beer Is Here 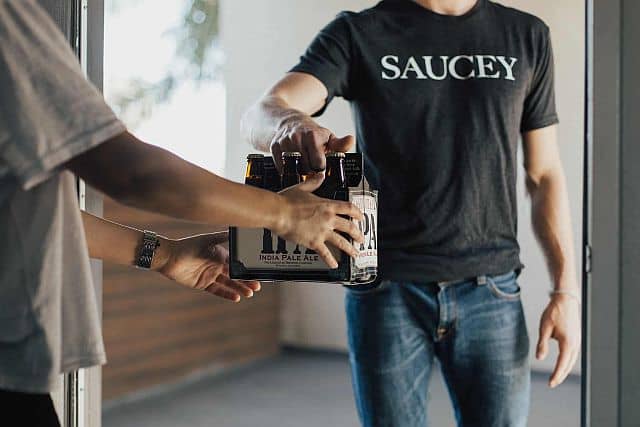 In the days before COVID-19, beer drinkers satiated their thirst with a quick trip to a local brewery, liquor store or supermarket. Little planning was required. You went in, scanned the choices, bought what you wanted and went on your merry way. The idea of alcohol delivery wasn’t really on the radar. Unless planning a special event (or wishing somebody could make a midnight drop), I mean, why would you? When you want a beer, you kind of want it right now. Shelter-in-place orders forced us to change that thinking, and, as a result, interest in direct-to-consumer shipping of craft beers and other alcoholic beverages increased and continues to climb.

According to a recent report released by the Brewers Association, 73% of craft beer drinkers would be interested in getting beer delivered to their doorsteps and 84% say they want to be able to legally do so. The problem is that only 12 states and the District of Columbia allow interstate direct shipments, and the laws governing such shipments are mind-bending. (Credit to those breweries that have navigated the legal paperwork to figure it out.) The 13 states and district allowing interstate delivery, meaning you can live in one state but order from an independent brewery in another state, include Alaska, Kentucky, Nebraska, Nevada, New Hampshire, North Dakota, Ohio, Oregon, Pennsylvania, Rhode Island, Vermont, Virginia and Washington, D.C. Shipping and receiving within those states is easiest, except Kentucky: more than 30 dry counties still exist there, thus beer delivery is not available in those counties.

Sovos ShipCompliant helped conduct the survey and has been instrumental in outlining the how-to of compliance and alcoholic beverage delivery. “It’s perhaps no surprise that craft beer drinkers’ interest in having their favorite beverages shipped to their doorsteps grew amid the COVID-19 pandemic,” said Larry Cormier, vice president and general manager, Sovos ShipCompliant. “Consumers got a taste for DtC beer shipments, and these attitudes and interests are here to stay.”

The poll also revealed that just over half of regular craft beer drinkers have purchased product directly from a brewery and had it delivered to their homes. Even more, 78%, said they’ve tried beers while traveling outside of their local area and would like to purchase it again and have it delivered.

The good news is that beer delivery in-state is not nearly as complicated as it is across state borders. To help breweries, bars and restaurants maintain some level of business during the height of COVID, many state, county and local legislatures temporarily eased restrictions around the sale of beer, wine, and alcohol. Some of those measures have now become permanent, even in Alabama, which used to be among the states with the strictest regulations. Beginning October 1 in Alabama, new laws will allow state-licensed retailers and restaurants to deliver limited amounts of alcohol to customers within the state’s lines.

Of course, these kinds of legislative changes help bolster business for breweries, but they also bring welcome convenience to beer drinkers.

“This is not only a pandemic-induced pivot but a response to the growing demand we see from beer lovers to access their favorite beverage — online and shipped to their homes — the same way they do countless other goods in today’s ecommerce era,” Cormier stated.

So how DO you get your favorite craft beer, or one you’ve been yearning to try, delivered?

Well, you can start with the brewery itself. Depending on where it’s located, it might be able to ship straight to you. Or, you could go through other retail channels, such as independent or chain beer and wine stores. And then there are apps like Drizly, Minibar, and Tavour, which don’t actually handle the beer; the apps simply make the connection between you and the retailer. Drizly is known for its quick turnaround and prompt delivery, so it’s the go-to for people looking for a drop-off within an hour (or sometimes 2-3 days, depending on the desired beer and your location).

As Americans continue to face the unknown surrounding COVID and its variants, it’s comforting to know that alcohol delivery is an option. After all, nobody wants to enter the football season without access to their favorite craft beer. Direct-to-consumer delivery brings the beer home.