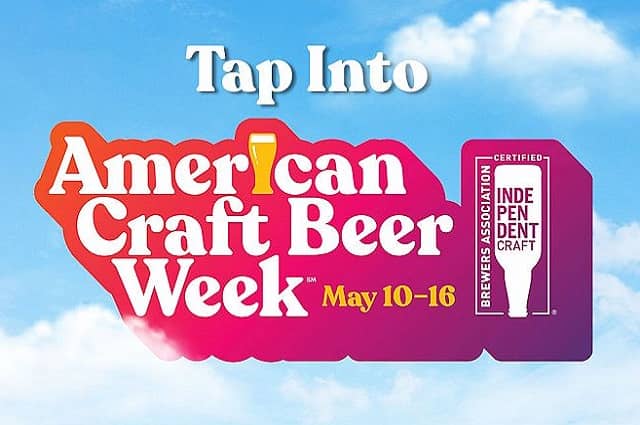 It’s time to gather; raise a pint, tulip or pilsner glass, and par-tay!! The 15th annual American Craft Beer Week runs May 10-16, and the timing feels perfect. COVID restrictions are beginning to lift around the country, meaning craft beer drinkers can again gather in higher numbers in beer gardens and taprooms.

This year’s beer week feels especially significant since the industry took a hard hit in 2020. Nevertheless, according to a survey sponsored by the Brewers Association, which hosts the beer week, U.S. craft breweries managed to maintain more than 138,000 full- and part-time jobs. Additionally, many pivoted during the pandemic and began producing hand sanitizer and hosted fundraisers for frontline workers.

The week-long celebration encourages beer enthusiasts to show their appreciation by frequenting brewpubs, breweries or taprooms and purchasing beer to go, for delivery or to enjoy on-site.

“This year’s American Craft Beer Week, more than ever, is about more than just delicious craft beer,” said Ann Obenchain, marketing director of the Brewers Association. “It’s about community and showing support for hometown taprooms, brewpubs, and breweries.”

With more than 8,500 craft beer bars and breweries in the U.S, offering a variety of craft beer types, 85% of adults of legal drinking age live within 10 miles of a brewery.  So, it’s easy to show some beer love, take advantage of specials and try some new brews this week. Consumers can look for the Independent Craft Brewer Seal to help identify beer brewed by small and independent brewers.

In Ohio, 70 brewery members of the Ohio Craft Brewers Association collaborated on an IPA/pale ale, From the Heart, which will be released this week. Participating breweries purchased donated ingredients from the state association and brewed a variation of an IPA/pale ale recipe developed by the association’s board members. Different yeast strains, water profiles and processes are expected to yield similar, yet different versions. Some of the participating breweries include Codex in Jackson Township, Blue Heron in Medina, Lock 15 in Akron and Uniontown in Ashland.

Crow Peak Brewing in Spearfish, South Dakota is offering happy hour prices all day throughout the week. In addition, it is featuring Brewery Passports, which encourage locals to stop at any of the three breweries in Spearfish to get a passport, buy a pint and earn a stamp from each brewery, and then show the completed passport at any brewery to receive a free “drink local” sticker. Crow Peak is also releasing a Baltic Porter.

Confluence Brewing Co. in Des Moines is doing something similar but within its own brewery. It’s kicking off its Grab a Beer Tour passport in its taproom, where beer drinkers order the beer of the day throughout the week and earn a stamp for each beer. More stamps equal more rewards. Drink a “beer of the day” for all seven days to receive a free four-pack, t-shirt and koozie.

Meanwhile, Utah breweries are enticing beer lovers with something different each day: Epic Brewing, RoHa, Shades and Red Rock are releasing new beers; Bewilder is featuring $3 pints and 10% off merchandise; and Desert Edge is offering food specials. This is not a week to be concerned about craft beer calories.

These breweries represent a mere sample of what’s doing in breweries from the Pacific Northwest to New England and California to Florida. Independent small craft breweries in all 50 states are looking forward to tapping new beers and sharing deals with their fans during this amazing week-long celebration of American craft beer. Cheers!