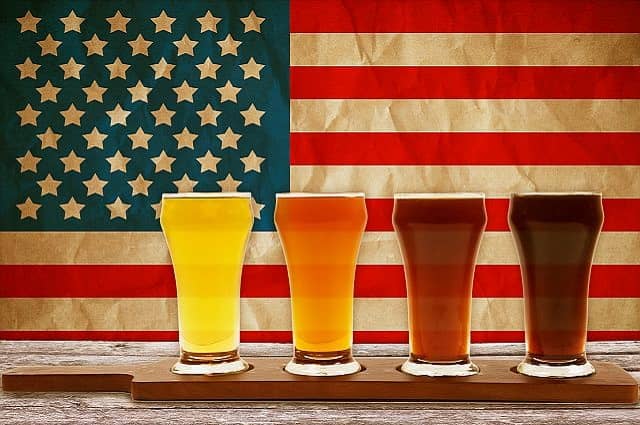 Beer and the Fourth of July are natural allies, and frankly, the holiday wouldn’t be the same without an American-made brew. You could pick up a six-pack to share with family and friends over a great hamburger and watermelon, or you could celebrate America’s independence at a brewery. Look no further than these five whose names and beers honor people and elements of our country’s founding.

Paying homage to the United States original 13 colonies, 13 Stripes stands for community and coming together against the impossible. It’s how the brewery’s owners, who are Revolutionary War enthusiasts, imagine the mindset of the men who planned America’s rise against the British. Beer, of course, is part of their vision: “Huddled together over beer, our forefathers met in pubs across 13 colonies to design a revolution that pitted them against overwhelming odds. Their success established a legacy that has passed on to every beating heart that claims the stars and stripes as their own.”

Cans bear names like Broken Crown, Defiance, Not My King and Freeborn alongside descriptions of each beer’s style and Revolutionary War quotes, which support each beer’s name. Taken together, it’s an unusual and fun history lesson, and a good reminder of who said, “Give me liberty or give me death.”

In 1778, American forces successfully fought the British in what is now known as the Battle of Rhode Island. The Revolutionary War continued, with the French siding with the Americans. In March 1781, General George Washington crossed Conanicut Island in Rhode Island to meet with French military leader Jean-Baptiste Donatien de Vimeur, comte de Rochambeau to plan the final battles of the Revolutionary War. This small brewery on the island remembers Washington’s crossing, serving Berliner Weisse, West Coast IPA, Strawberry Blonde and others this Independence Day.

Among the best-known craft breweries, Sam Adams retains its certified Independent Brewers seal despite being a giant in the industry. Founder Jim Koch named his original beer and subsequent brewery after American Revolution politician and signer of the Declaration of Independence because he admired Adams’ thirst for sovereignty and belief that all Americans deserve the right to pursue happiness and follow their dreams. Boston Lager is a popular choice each July (and throughout the year), but this summer try the limited run American Crafted. It’s a 4.9% lager brewed with Michigan-grown hops and is part of a joint venture with clothing company American Giant. The two companies came together over shared values: American made, simply made and quality made.

New Englanders take pride in their role in America’s founding. New Hampshire is no exception. Brothers Tom, Patrick and Sean Kelly named the brewery for the state’s place as the ninth of the 13 states to ratify the American Constitution. Their goal is to eventually have a beer made entirely from New Hampshire-grown ingredients. Until that happens, toast the nation with Old Glory IPA that is described as both “dank and juicy.”

While not part of the original Constitution, the 21st Amendment makes it possible for Americans to even savor a good beer. This California brewery sings the amendment’s praises and recognizes that by “repealing Prohibition, we, as a society, were able to begin the slow climb back to reclaiming the essence of the neighborhood gathering place.” The brewery itself is a local gathering place while also being an innovator in the craft beer industry. It regularly introduces new styles and new products for its fans to try. For a fitting 4th of July flavor, try the Hell or High Watermelon, a wheat beer brewed with watermelons and distributed in cans depicting Lady Liberty with a slice of summer’s hottest fruit in her hand. Abraham Lincoln is another favorite hero. His likeness stands out on the brewery’s Brew Free! or Die series, including its Tropical IPA (featuring Abe in a lei), American IPA and Blood Orange IPA.