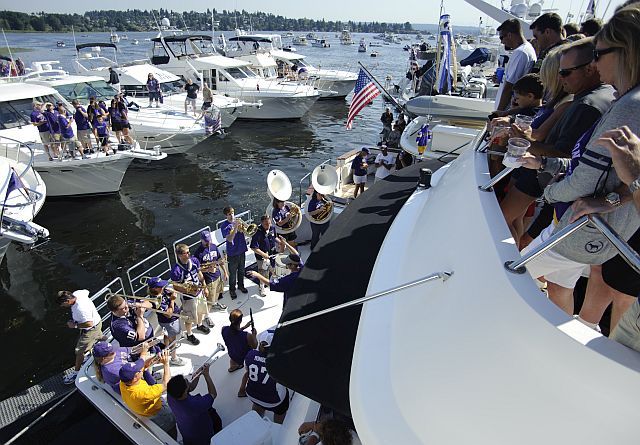 Coming off its third consecutive double-digit-win season, the Huskies face their biggest rebuild yet under head coach Chris Petersen’s tenure. They must replace 13 starters, including nine on defense. One of the most critical offensive replacements will be at quarterback. However, Georgia-transfer Jacob Eason brings a pro-style arm that should take some pressure off their revamped defense.

One thing that won’t change is the awesome tailgating at the picturesque university. Husky Stadium’s open end overlooks scenic Lake Washington and the Cascade Mountains, including Mount Rainier.

While Husky fans have the opportunity to tailgate near the stadium or at an internal tailgating area known as The Zone, they can also sailgate, just like their riverside brethren at Tennessee.

One of the hottest spots is Husky Harbor which docks up to 150 boats on game day. The harbor welcomes fans on charter boats, luxury yachts, sailboats, speedboats and even a few braves souls in kayaks. Out in the bay, boats tie-up together, allowing sailgaters to hop between vessels to create a floating tailgating lot.

Tailgating fare is often based on the Huskies water-centered location, as well. Hot clam chowder and salmon top most menus with Firenog—a combination of Fireball cinnamon whiskey and eggnog—adding warmth on rainy Seattle days.

Huskies fans are loud, and no third down would be complete without the stadium-thundering chant, “Go Huskies!” It doesn’t end there, though. Each time they score, be prepared for the shrill sound of an actual air raid siren from WWII. So if you like it loud and sublimely beautiful, Washington is worth checking out.