Clemson manhandled Alabama last year in the CFP National Championship game. But does anyone really think that Alabama is going away? With head coach Nick Saban at the helm? That’s what we thought. Despite losing the title game each of the last two times they played Clemson, is there a college team that wouldn’t trade places with Bama in a heartbeat? Again, that’s what we thought.

So 2019 really shouldn’t be any different as the Tide will continue to roll on. Especially with Heisman front-runner Tua Tagovailoa at quarterback, Biletnikoff Award-winner Jerry Jeudy at receiver, and ten of the top 50 players on some 2020 NFL Draft boards all returning. Alabama doesn’t rebuild, they just reload.

Which certainly makes the tailgating in Tuscaloosa even more fun. On a typical Saturday, there are nearly as many people partying outside Bryant-Denny Stadium as there are inside. Of course, this stands to reason since Alabama tickets aren’t easy to come by.

There are some traditions you will find here that you’ll find at no other school in the nation. While every school sports the team colors, only at Alabama sports a pattern. The black-and-white checkered pattern, known as houndstooth, was made famous by former legendary head coach Paul “Bear” Bryant. Among the Tide’s red and white, you’ll see distinctive houndstooth hats, shoes, pants and even tailgating cups, napkins and tablecloths.

Another fan favorite is Yellowhammers—a local refreshing cocktail for those hot Alabama days. It’s comprised of orange juice, pineapple juice and, for good measure, a copious amount of alcohol. And if you need anything else, well, here you go—Roll Tide! 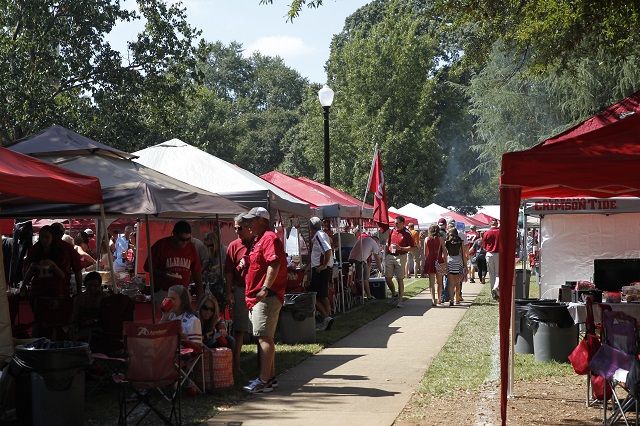