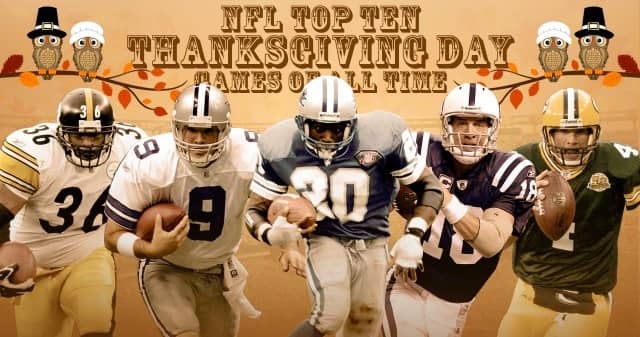 If watching football isn’t part of your Thanksgiving tradition, well…what exactly are you doing on turkey day? Not watching NFL football is like not having turkey at the table. Some of the best memories are watching those players bite into a turkey leg after the game, upon winning the Turkey Leg award. We know what you’re thinking, you’ve probably had some great backyard Thanksgiving achievements too, but they will not be making this list. There have been several incredible performances on the last Thursday of November over the years and with this list we are giving you the Top 3 Thanksgiving player performances of all-time.

It was in this game that Peyton Manning gave notice that Dan Marino’s single season passing touchdown record, which was 48, was on the line. Manning came into the game with 35 touchdown passes on the season and he ended the day with 41. If you’re wondering…he ended the season with 49. On this Thanksgiving, Peyton must have been slinging some turkey before the game ever started because he was special. Manning threw for just 236 yards on 23 of 28 passing but it was the six touchdown passes that put him on this list. He only had two players catch the scores, three went to Brandon Stokley and three went to Marvin Harrison- in just three quarters we should add. The Colts won it 41-9 and it lives on as one of the great performances on turkey day.

The poor Lions were victims of O.J. Simpson long before they were victims of Peyton Manning on turkey day. While we think of Simpson in a much different light in 2020, at the time of this game, he was one of the all-time NFL great running backs. In the 1973 season, Simpson rushed for 2,003 yards, an NFL season record at the time.  That included an NFL record-tying 250 yards in a game against the Patriots. However, in this turkey day game, he set a new NFL record when he galloped for 273 yards. His longest run was a breakaway 48-yard touchdown in the third quarter. So, did the Bills win the game? Unlike the Colts, the Bills couldn’t leverage a great single performance into a win partly because Bills quarterback Gary Marangi was an atrocious 4 of 21 passing with only 29 yards through the air in a 27-14 defeat.

When Randy Moss entered the league as a rookie, the future Hall-of-Famer was showstopping and electric to watch. This game against the Cowboys on Thanksgiving was no different. Feeling disrespected that the Cowboys didn’t draft him with the number eight pick that year because of supposed “character” issues, Moss set out to dominate and he did just that. Moss only caught three passes in the game.  However, all three were LONG touchdowns. They went for 51, 56 and 56 yards. The Vikings won that day in a 46-36 shootout.  To this day, no receiver has caught more than three touchdown passes on turkey day. Before playing the Cowboys for a final time in 2010 Moss said that he “always carries a certain chip on my shoulder for the Cowboys”.