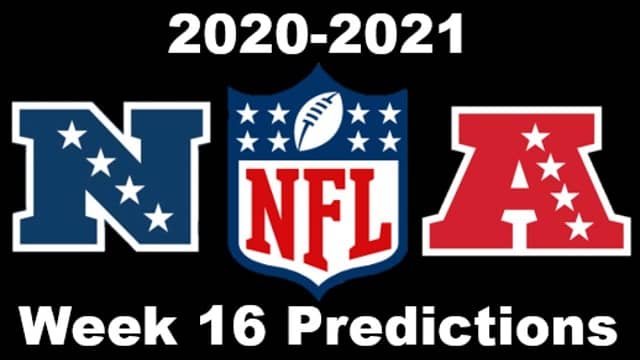 Although it may be Christmas week and gifts should be flying left and right, it feels very Scrooge-like that the NFL regular season has just two weeks left. Maybe the present we will get from that are some incredible games as the playoff picture heats up and things could very well come right down to the wire.

We saw a great upset last week with the Jets beating the Rams, an improbable comeback as the Bucs defeated the Falcons, and the playoff race tightened up as the AFC and NFC Wild Card pictures are neck and neck. Last week was filled with tons of great action and hopefully this week will be too. Games will start on Christmas and go through Monday night. Here are the Top 3 NFL games of week 16.

This game features two teams who are on the outside looking in as the Ravens sit a game back of the Wildcard in the AFC and the Giants trail Washington by a game for the NFC East title. The Ravens are coming off their third-straight win and their offense has picked up steam and starting to look like the 2019 version.  The team is also getting healthy at the right time. The Giants haven’t had the same fortunes. The absence of Daniel Jones has been critical to their failures over the last two weeks to score points.  The easiest path for the Giants to win the NFC East is to win out and hope that Washington loses one of their two remaining games.

This contest will feature the best matchup of the week against two of the top teams in the league. Aaron Rodgers and the Packers are rolling and have taken control of the top seed in the NFC with just two games to play. The Titans are in a more crucial situation, needing to win out to win the division and stay out of the wild card. The Packers are 6-1 at home this season but they haven’t faced a running back like Derrick Henry who could potentially rush for over 2,000 yards this season. Rodgers should be able to take advantage of a weak Titans secondary that is allowing 276 yards per game through the air.

One thing I didn’t have on my 2020 bingo card was the Los Angeles Rams losing to the winless New York Jets, but here we are. That loss was brutal for LA as they also fell out of the top spot in the NFC West. Now they travel to Seattle to take on the streaking Seahawks. The Rams forced three turnovers from Russell Wilson the last time these two faced each other, but this game will be different as Seattle is 6-1 at home and a loss like that to the Jets can scar a team’s mental outlook. At the very least, Los Angeles wants to control the first wildcard spot in the NFC so they can play an NFC East team in round one.