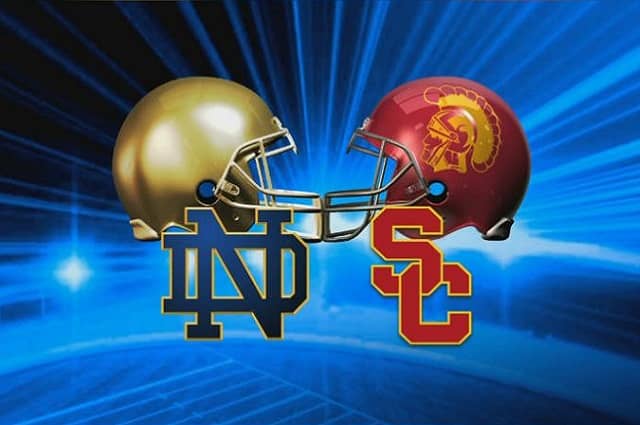 College football is honestly just becoming exhausting. Every week the Top 25 provides a brand-new slew of teams that looks like freshman entering college orientation. The University of Texas is ranked, but it’s the Roadrunners from San Antonio, not the Longhorns from Austin. Outside of Georgia, there has been no consistency in the top four. Iowa is the latest to let down their fan base. They were rocked by Purdue, and it wasn’t particularly close. Now everyone is fighting for a chance in the College Football Playoffs and truly nothing is off the table. Overshadowing the CFP is the coaching rumor mill as Ed Orgeron won’t return to LSU after the season ends and Nick Rolovich was fired on Monday by Washington State for refusing the vaccine mandate. With zero Top 25 matchups in week eight, we are digging deep for our top three games of the week.

These two teams bring a lot of excitement because of their large fan bases and the history of the programs. You would think that USC’s three losses already would eliminate them from Pac 12 south contention.  However, because they are in the Pac 12, which only has one team ranked in the Top 25, anything can still happen.  The Trojans, who were expected to make a trip to the Rose Bowl in January, can be expected to fight until the very end of the season despite the firing of head coach Clay Helton after the Stanford loss. Notre Dame has been a disappointment this year as well. The Fighting Irish are 5-1, and their only loss came against No. 2 Cincinnati.  However, three of their five wins have been by three points against vastly inferior teams. They could very easily be 2-4.  Despite national media wishes, this Irish team won’t be making any sort of CFP push. Home field advantage should help Notre Dame in this game.  It could be an exciting matchup, and I will be watching. Prediction: Notre Dame

No. 8 Oklahoma State vs Iowa State

The Cowboys are very quietly putting together one of the top campaigns in the Big 12 and while they still have a lot to prove, there is no doubt that they deserve a spot in the College Football Playoff if they can find a way to get through these next few games and then knock off their rival, the Sooners. Iowa State may be the biggest disappointment in the conference thus far, but it’s also a team that is still very talented, very well coached, and has a history of finding its stride right around this time in the season. My biggest scare for OSU is that they are playing this game on the road. Ames can be a tough place to win and even if the Cyclones haven’t been perfect so far this season, expect them to push the limits of the Cowboys. I am all in on this Big 12 race and this should be the best game in the conference this weekend as the rest of the teams are playing relatively meaningless games. Prediction: Oklahoma State

Clemson vs No. 25 Pittsburgh

Want to see something funny? The Clemson Tigers are three-point underdogs to Pittsburgh for this game. The last time that Clemson was an underdog in the regular season was 2016 when they faced Lamar Jackson’s Louisville squad. There can’t be a bigger disappointment in college football than the Clemson Tigers this season.  They began the season ranked third and were knocked out of the Top 25 by week six.  I think it’s funny that Clemson never gets respect because they don’t play enough ranked teams. Now they are getting their shot and they already have two losses. While this game doesn’t add any importance to the CFP, I think it’s a huge opportunity for Pittsburgh to gain confidence as a program and a potential all-time low for the Tigers over the last four years. I don’t believe that they will plummet that far though. Prediction: Clemson