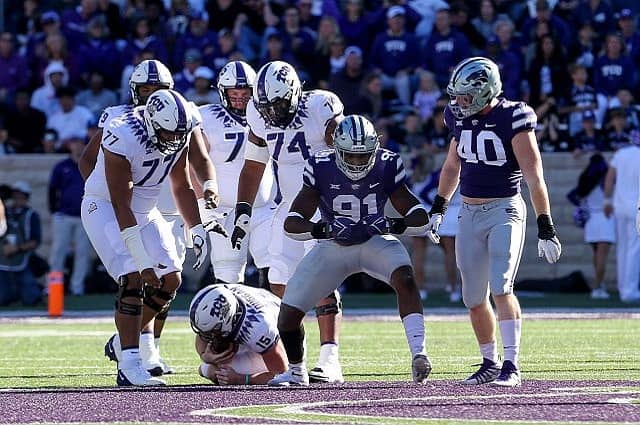 The Horned Frogs are looking to keep their perfect season alive in the Big 12 Championship Game in Arlington on Saturday. Sonny Dykes has put together a masterclass on how to coach a team in your first year and he has the Horned Frogs on the cusp of history as just the second team from the Big 12 to play in a CFP semi-final. Many now believe that whether or not they win this game, they will be in the Top 4. To that I say, not so fast. This is the committee that LOVES SEC schools and has shown a history of that in the past. If USC wins the Pac 12 and TCU loses, there is a chance that a two-loss Bama team or a one-loss Ohio State team makes it in over TCU. They control their destiny and winning outright is simply the easiest way to move forward. These two teams played earlier this year, and TCU made a come-from-behind charge where they blanked Kansas State in the second half to win 38-28. The Wildcats have some big playmakers and TCU was prone to letting them score in that first game. This one should be close, should be high scoring, and should be a lot of fun for Big 12 fans. I like TCU to go perfect. Prediction: Kansas State 28 TCU 30

Well, for the time being, Lincoln Riley and Caleb Williams have done it. They put together an incredible first season at USC and are now in the hunt to play for a college football playoff. They capped off their season with a dominant win over Notre Dame where Williams put a Heisman-worthy performance on full display. Now the Trojans just need to get past Utah and there would be no reason to think that they don’t have that final spot in the top four wrapped up. The issue is that they have played Utah already this season, and the Utes came away with an incredible win. Utah QB Cameron Rising and Williams were both sensational in that game as they both threw for more than 400 yards and Williams threw five touchdowns in that game. In the end, Utah won by a single point after scoring 15 points in the fourth and winning with a two-point conversion. Utah has three losses, and a weird tie-breaker rule prompted them to play in this game. I like USC to roll. Prediction: Utah 30 USC 42

This game is far less important, so we aren’t giving it as much space, but who doesn’t love a good matchup between two SEC schools that had great seasons. I realistically don’t think LSU can compete with Georgia, especially after their disaster regular season finale against Texas A&M, but who knows. Georgia is basically locked into the playoff no matter what happens in this game, but it should still be a great watch. Prediction: Georgia 31 LSU 10