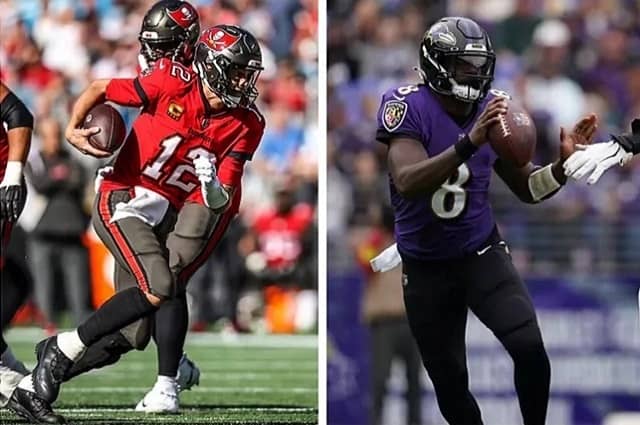 As we enter the 8th week of the season, I am left with more questions than answers at this point about the state of the NFL. Why are there are only 13 teams with a winning record? Are the Bucs and the Packers really that bad? Are the only decent NFC teams going to come out of the East? Should the QB position be given even more advantages than it already receives so we see some more points being scored? With all of these questions maybe we will get some answers as we enter Halloween weekend. Here are the top 3 2022 NFL games week 8.

Here is a primetime game that will have EVERYONE talking if the Bucs lay another goose egg. They are coming off their worst game in the Tom Brady era, losing to a one-win Panther team that just fired their head coach and traded away their franchise player. The offense looks atrocious in Tampa Bay.  The same can’t be said for Baltimore’s offense which seems to be clicking at the moment. The Bucs get to play this game at home, but if they can’t put up a decent performance, every sports critic in the world will be calling for Tom Brady’s retirement. I’d make a case that a serious change at the offensive coordinator position must be addressed before it gets too out of hand in Tampa. Things have gotten bad, and this could be a chance for them to redeem themselves, but I don’t see that happening. Prediction: Ravens 25 Bucs 21

Boy, if you told me before the season that this game would have lots of eyes on it, I wouldn’t have believed you. The Pats are seemingly going through a massive QB battle and controversy as Mac Jones was benched just six passes into the Monday Night Football Game against the Bears. As Bill Belichick refuses to name a starter to the media, we will be eager to see who he chooses. On the other side of this, the Jets have won four straight games and are 5-2. We could be talking about a playoff team here if they can bounce back from a season-ending injury to RB Breece Hall who was making a case for Rookie of the Year. The Jets don’t often beat the Patriots, and I know Belichick will have something up his sleeve in this game, but maybe a new era is upon us?  Prediction: Patriots 20 Jets 22

If there is a guy who looks like he is having no fun playing football now, it’s Aaron Rodgers. The Packers stink. Seriously. Rodgers has even brought up cutting some guys so that’s how bad it has gotten. They’ve lost three straight games and their last win came against the Patriots in overtime which no longer looks impressive. Meanwhile, the Bills are coming off a bye week, Josh Allen just beat Patrick Mahomes and the Bills offense should strike the fear of God into all their opponents. This could be a very public beatdown of a new great versus an old legend. Things could get very dicey in Title Town after this contest. Prediction: Packers 21 Bills 37