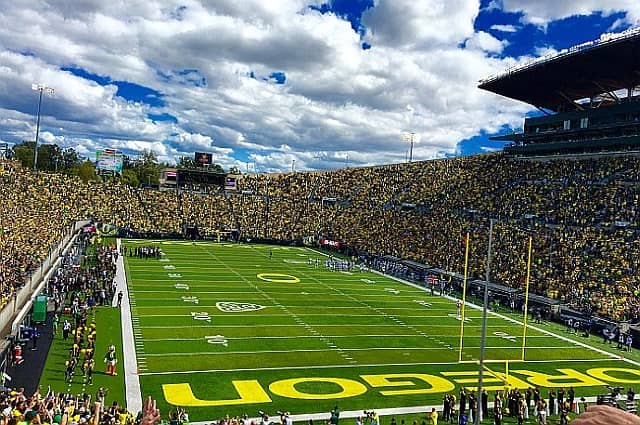 Hello, upset city. What an incredible college football weekend we were treated to last week with the major upsets coming to Alabama and USC. It’s not every week that a couple of storied, and highly ranked programs fall in epic fashion so let’s bask in that for a moment. Those upsets have yielded a wild new top-10 and some intriguing matchups going into this weekend. Here are the top 3 2022 college football games week 8.

Lots of thoughts here. For starters, how is Texas a Top 20 team? It just makes no sense. They have a single quality win over an Oklahoma team that looks more like a Rutgers team than a typical Sooner team. However, this helps the Big 12 here as OSU, who lost in double over-time to TCU, can bounce back with a win. The Cowboys could likely meet back up with TCU in a Big 12 Championship Game. If Quinn Ewers and the Longhorns were able to pull off a win, we’ll buckle in because the Big 12 is about to get crazy. I just don’t see that happening. This OSU defense hasn’t been what we expected it to be, but their offense has been potent, and Spencer Sanders has had a fantastic season up to this point. If he is making a serious Heisman run, here is his moment with the nation watching. Prediction:  Texas 28 Oklahoma State 32

Undefeated UCLA is now the cream of the crop in the Pac 12. Of course, since USC couldn’t hold off Utah last week, that conference out west loves to bully each other and make it impossible to have a clear path to the College Football Playoff. If the Bruins walk away with a win here against Oregon, who hasn’t lost since the Georgia opener, this is a legit CFP team in my eyes. The Bruins have an explosive offense and still remain unbeaten. Since Chip Kelly returned to the Pac 12, his Bruins teams haven’t really been a great watch against his former team. So, will this game prove to be different? Oregon has an insane 20+ game home winning streak so I’d imagine the atmosphere will be fun. If I follow my own advice and believe in the conference cannibalism, I know how I’m leaning. Prediction: UCLA 26 Oregon 33

Let’s take a moment to appreciate a week where the six teams repped in this top three don’t come from the SEC. TCU is the team to beat in the Big 12 and their offense is proving to be pretty damn lethal. Lincoln Riley’s little brother must know what he’s doing as the OC and head coach Sonny Dykes must be on top of the world. Kansas State has quietly been solid this year, but a lone loss has prevented them from the Top 15 thus far. If the Big 12 wants some crazy chaos, a Wildcats win would do just that. They have a solid rush attack and a powerful offensive line. The question is if they can keep up with the Horned Frogs offense? I’m not buying it. Prediction: Kansas State 20 TCU 38