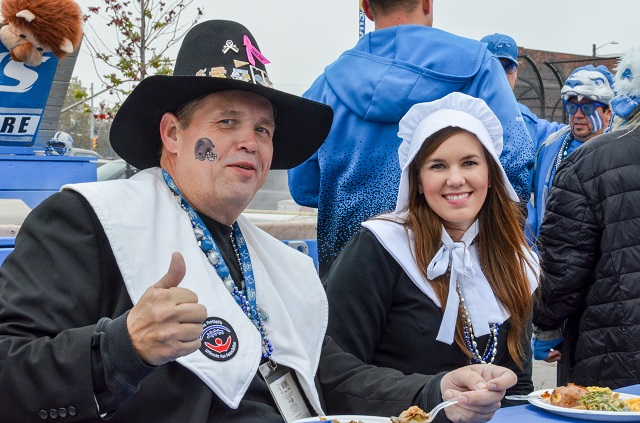 It began as one man’s quest for a shot on TV as the cameras scanned the stadium. 28 years later, it’s a set-in-stone tradition for Lions fans.

“When I first bought season tickets in ‘92, I decided if I dressed like a pilgrim for Thanksgiving then I could get on TV,” says Mark Mullins, an ardent Lions fan from Fenton, Michigan, which sits about an hour north of Detroit.

This was back when sportscaster John Madden bestowed a real turkey leg on his chosen MVPs of the annual Thanksgiving football game. So Mullins tricked himself out in a traditional pilgrim get-up complete with his own turkey leg.

“It worked out pretty good,” he says. “I was on TV, I was in the newspaper, I was pretty popular, and everybody at home got to see me. It built up from there.”

The next Thanksgiving, fellow fans in the lot and in the stands, were asking if the pilgrim would ride again. “You can’t not respond to that,” he says. So the costumed tradition was born and has burgeoned into its own identity for 25 years.

For decades, only two NFL teams have always played on Thanksgiving. The Dallas Cowboys hit the Turkey Day airwaves in 1966. General Manager Tex Schramm — also responsible for hatching the Dallas Cowboy Cheerleaders phenomenon — snatched at the chance for a televised game as his six-year-old team began its stellar ascent under a young Tom Landry.

But more than 30 years before, the Lions led the nation as the first Thanksgiving Day NFL game. Radio-station owner George Richards bought the Portsmouth (Ohio) Spartans in 1934 and moved them to his beloved Detroit, dubbing them the Lions. That first year, by Thanksgiving, they had lost only once. But the new team lingered in the shadow of the city’s baseball glory as the Tigers went 101-53 to win the Pennant that fall.

So Richards — who owned one of the larger radio stations in the country — threw his notable weight around at NBC, convincing them to broadcast a Thanksgiving football game nationwide. The undefeated Chicago Bears strolled into town. The Lions sold out their 26,000-seat stadium, and, though they lost 16-19, a steadfast tradition was born.

This year marks the 84th Thanksgiving Day game in a row for the Lions. “That’s our special tradition. You always know where you’ll be on Thanksgiving,” Mullin says.

He started attending Lions’ games back in high school. “My dad worked at General Motors and got us tickets,” recalls Mullins. After high school, he continued going with friends. “I graduated in ’79, worked in the ‘80s, and did a lot of tailgating,” he smiles. “We got to know everyone around us. Became great friends.”

Now his Thanksgiving day begins long before most people’s turkeys hit the ovens and hours before the sun rises. Starting about 4:30 a.m., he hits the road with his adult daughter and, an hour-and-a-half later, pulls into their tailgate spot in the Eastern Market area of Detroit, about two miles from Ford Field.

As part of the Tubgaters tailgate crew — which literally brings a full-size, fully filled, and steamy warm hot tub to every Lions’ tailgate — set-up lasts well over an hour. “We’re setting up the tub, the tables for the buffet, a tent for the DJ, speakers, sound board, everything,” lists Mullins. By then, the clock strikes 8:00 a.m. and daylight hits the lot. “Then we’re ready for a Bloody Mary,” he says. And that is when he dons his official Pilgrim ensemble. 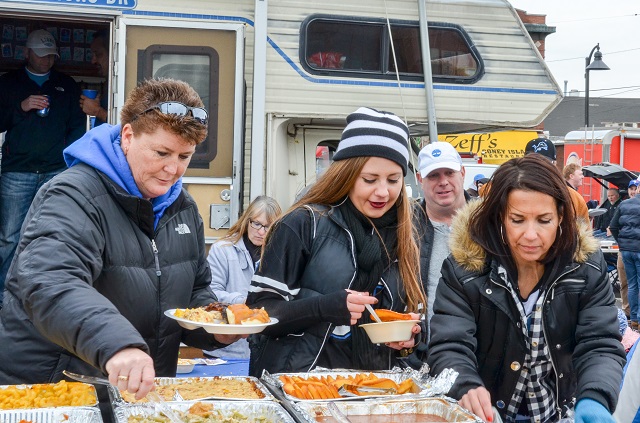 Ring around the Collar

When the pilgrim concept landed in Mullins’ mind that first Thanksgiving, the costume was on-the-fly. “I just grabbed a black suit jacket and bought a hat,” he says. But his mother did sew him a stereotypical wide, white, floppy collar.

“As years went along, Mom sewed me a nicer collar and cuffs, and I added a few things,” Mullins says, like pinning buttons on his iconic pilgrim hat. “But my suit’s not the most detailed. If I was in a contest, I wouldn’t win. But it is pretty unique.”

That is partly because Mullins looms tall and robust. “I’m really big, so part of the whole thing is how small it was on me,” he laughs. “I’ve taken a lot of ribbing over the years, which I don’t mind at all.” The simplicity of the homespun suit only creates greater TV-lens appeal as an imposing pilgrim towers above the Thanksgiving crowd.

But when Detroit runs cold in November, the pilgrim persona has had to adapt beyond the hidden turtleneck or sweatshirts. Five years ago, the mercury dropped to 24 degrees and the Pilgrim went Matrix. “I wore my black leather coat instead of my regular coat,” he says, adding that they do have a heater to stand next to at the tailgate and a motorhome nearby for warm-ups. “Every year we pray for warm weather, and we get it about every four or five years.”

The classic turkey leg accessory to the costume presented a greater conundrum. “The first year it was greasy and oily, and I didn’t it carry around very much. It wasn’t very sanitary,” Mullins says disgustingly. “But after that, I learned to bake it a week ahead of time. Just one turkey leg. Then let it sit out for a week, so it gets good and dry, so I can carry it around.”

The leg gets plenty of abuse throughout the one day. Used as a substitute football, held as a memento by around 50 people, laid alongside the urinal for the obligatory pit stops, and dropped at least a dozen times.

“So that gives you an idea of what shape my turkey leg was in when I’m walking down the stairs to my seat about 20 years ago,” regales Mullins. “I’m waving the leg as I walk, and this one young man about 15 years old, jumped up and grabbed my turkey leg and, before I could say anything, he took a great big bite out of it.” He laughs. He snapped a picture with the teen. “I’ve had him come up to me three times since then, and he’ll say, ‘I’m the kid that took a bite out of your turkey leg’.”

Edible turkey legs abound at the actual tailgate. The Thanksgiving buffet dwarfs their other game spreads, boasts Mullins. “During the season, we do cook and barbecue, but more for our group of 20 to 30 people,” he says, though the surrounding tailgates tend to merge into one another, creating what looks like one large mass of tailgating.

Bill North, one of the Tubgaters, launches the day by standing on the roof of his motorhome and welcoming everyone. “He mentions people we’ve lost, the years we have had together, thanks everyone for coming, and says a quick prayer. Then we eat,” Mullins says with relish.

The menu runs to traditional fare with two or three turkeys, mashed potatoes and gravy, green bean casserole, and a cornucopia of other sides. Pumpkin pie reigns supreme. “It’s the only time we have a sign-up sheet beforehand,” explains Mullins, to make sure every classic dish is represented. “But if someone wants to join in at the last minute, we’re not going to say no. We say, ‘Bring a pie’.” The resulting trunkful of leftovers gets hauled to the local food bank.

“A lot of people get pretty extravagant. We even used to deep fry a turkey,” recalls Mullins. “But I can’t reiterate how special this is. It’s emotional on Thanksgiving.”

Their tailgate has grown from 50 to 150 people. “Everybody’s welcome. We’re all Lions fans,” states Mullins.

Besides the feasting, the Turkey Day tailgaters jam and soak. “With the music, we do a lot of dancing, especially after we eat,” Mullins says. “There’s a lot of silliness, nothing planned, but I’ve been known to bust a move.”

“Everybody really crowds around watching us having fun, so about half the time, it’s us entreating everybody else to join in,” says the twinkle-toed Pilgrim.

Some others also come to the tailgate in costumes of turkeys or Native Americans, but never a pilgrim. “Occasionally I see someone dressed like a pilgrim at the game. I welcome it,” Mullins says. “But my friends feel like they couldn’t.”

He also does a live podcast, called The Pilgrim Report, and on Thanksgiving, they have been known to sing a Christmas carol in the hot tub called “Tubbing in a Winter Wonderland.” And, yes, the Pilgrim wore his hat in the tub.

“We have spectators at every tailgate, not just on Thanksgiving,” he says, “because, man, we have fun. Too much fun.” 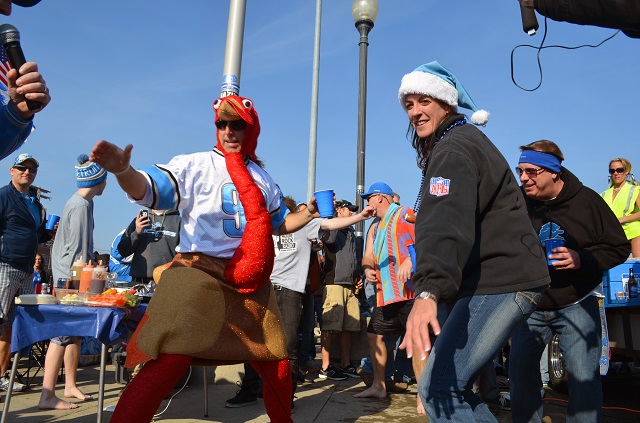 Thirsts run as deep as the hot tub at the holiday tailgate. “Of course, I’m the Bloody Mary guy,” states Mullins firmly. Everybody holds specific likes and dislikes with this cocktail, he adds, “so I’ve got a lot of stuff in mine.”

In the drink itself, Mullins likes the tang of dill pickle juice. His garnishes extend to savory additions, like olives and a piece of cheese, along with a beef stick. But that gets replaced by the more appropriate slice of turkey bacon on Thanksgiving.

One year, the Pilgrim went rogue and brought a concoction to truly thaw out the Detroit tailgaters. “I made some Fireball Jell-O shots,” smiles the Pilgrim. “I mixed orange Jell-O, apple cider, and Fireball.” That’s a Canadian spicy, sweet and cinnamon-laced whisky. “They were great. That became a new thing.”

The leg-toting pilgrim became a national identity for Mullins in 2004 when he was inducted into the Visa “Hall of Fans” in the Pro Football Hall of Fame. When that program was suspended a year later, a new fan-based program emerged — Pro Football’s Ultimate Fan Association. The Pilgrim was immediately selected.

Being a national Super Fan means a lot to Mullins. “I only wear the outfit on Thanksgiving, but I wear my pilgrim hat all season, ever since I became a member of the Hall of Fame.”

By that time, he’d been on TV at least 20 times, including commercials. His daughter also had become part of the costumed scene as Pilgrim Girl. “We have a priceless relationship. That made it a true family affair,” adds Mullins, who has raised her alone since she was four. She’s been Pilgrim Girl since she was 12. Now she’s 27 and a high school physics teacher. “She moved to Texas four years ago, but you bet she flies home for Thanksgiving,” Mullins says proudly. “She wouldn’t miss it for nothing.”

That first tingle of notoriety never wanes. “It’s a thrill in the stadium,” explains Mullins. He and his daughter walk down 50 flights of stairs to reach their second row seats behind the end zone. “It takes 20 minutes to get down those steps to our seats, because everybody hugs us and cheers,” he says.

“It’s a great feeling, too, knowing that friends and family that I haven’t seen in person on the holiday, they get to see me on TV. It’s so exciting,” he says, adding that the Pilgrim made him a star at his last class reunion. “All these people told me they watch on TV on Thanksgiving and wait for me to come on.”

Last year, one woman said she had taken a photo with the Pilgrim for 25 years in a row. “I was really impressed,” says a surprised Mullins. The woman, now in her 50’s, turned out to be another season ticket holder. “We friended each other on Facebook,” he chuckles.

The excitement of playing the Pilgrim peels the years away for Mullins. “On Wednesday night before Thanksgiving, I can’t sleep. I’m so excited. It’s ridiculous,” he says. “I feel like a 10-year-old kid on Christmas Eve, lying in bed. But I’m thinking about tailgating in Detroit.”