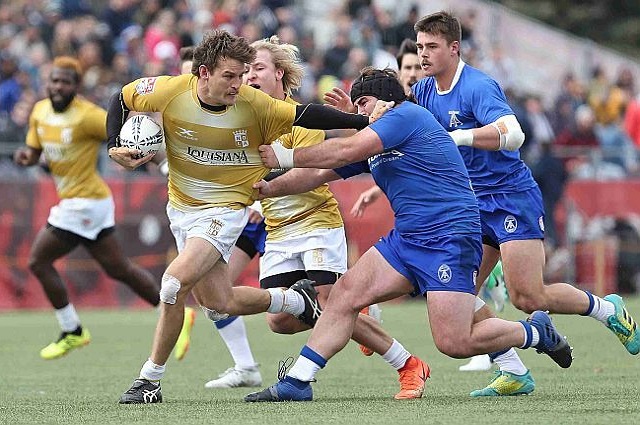 It’s fast, it’s relentless, it’s muscled, it’s fierce. It’s everything that America thinks of itself. So why aren’t you watching?

First off, rugby is not football without helmets. But the similarities are rampant. The ball looks like a football that overindulged during the holidays. There’s an endzone where all the points are scored. There’s a conversion. And there’s plays, tackles, kick-offs and passing. So why should any red-blooded American sports nut bother with rugby when they already have football?

Because, rugby is the primal, bare-knuckled ancestor of football. The pioneer of tackling. And the ball rarely seems to stop moving. So don’t tune out. You’ll like this. And it might be the answer to your withdrawals and depression when football ends each year in the dead of winter.

What’s the difference between rugby and football?

In rugby union (there’s another version, but it’s less popular), it’s all about the ball being in motion. No time outs. No moving any chains. No huddles. Not even tackles stop the momentum. “It’s based on plays versus watching the clock,” except, of course, to end the 40-minute halves, says Calder Cahill with USA Rugby, the governing body for rugby in America.

The terms are all different in rugby—for instance, a touchdown is called a try. But don’t get caught up in the terms. Keep your eye on the play. Just like when you learned any sport, the terms fall into place with a few games under your belt. “It’s very similar to football if it was all running backs playing the game,” says Cahill.

There’s more theater to rugby too. Take the lineout. When the ball goes out of bounds (into touch, as it’s called), the lineout restarts the play. Let’s skip the details of which players do what and just say that one guy throws the ball back into play, kind of like soccer or basketball. Seems straightforward.

Except in rugby, either team can hoist up one of their players by his or her legs to “stand” above the others and catch the ball. Like a mini cheerleading tower made of guys who could fit right in at WWE. “A lot of times, the throwing in is a designed play, like in basketball when there’s two seconds left to get that clear shot,” Cahill says.

But the lifted player is never dropped back down. By rule, he must be lowered until his feet touch the ground. And this is where rugby—despite it’s rough, man-to-man appearance of aggression—proves again that it’s based on well trained and regulated maneuvers to make it about the game, not the collisions. 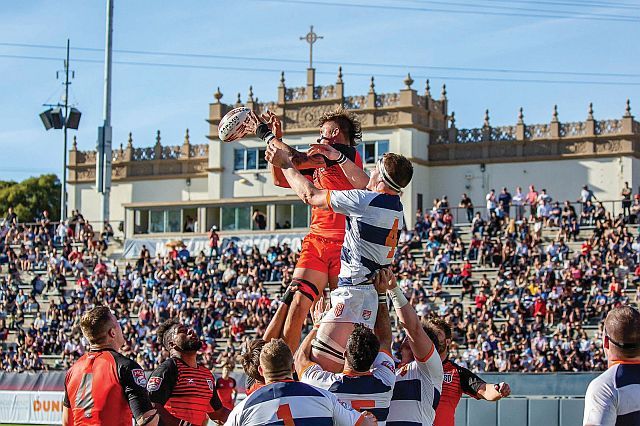 NO PADS, NO HELMETS

“It’s actually safer than football when it comes to injuries, which really surprises people,” explains Cahill. Because rugby’s not about smashing into the opponent. “Knowing you’re unprotected makes you less likely to tackle in a form that gets you injured,” he adds.

Instead, it’s close-contact tackling—wrapping your arms around the other player to bring him down as opposed to ramming into the other person. Plus there’s no forward passing in rugby, only laterals. That alleviates injuries from tacklers bulleting down the field to collide with a receiver at full speed.

Interestingly, that means it is the shoulders that feel the wear-and-tear in ongoing years. “Because your tackling is so very focused on leading with your shoulders and you wrap upward with your arms,” Cahill says. Knees too can give out, because nothing stops when someone’s tackled. “It’s essentially tackling and get up right away, like doing burpees for 40 minutes.”

The serious injuries in rugby tend to happen in the scrum. The pressure of twelve powerful men straining against each other en masse has resulted in spinal injuries from a simple slip in positioning. Not surprising when you hear the force generated in the middle of a scrum reaches about 3,000 pounds. Equal to giving a rhino a piggyback ride.

And now a description of some of those iconic and quirky plays we’ve all seen in rugby that make us scratch our head.

The ruck. It looks like a playground free-for-all to claim a loose ball. It starts when the guy carrying the ball gets tackled and has to immediately release it. It’s now up for grabs but within a specific set of rules—or laws, as they’re called. Other players rush in to form what appears to be a random melee to push and shove to create an offsides line so their team gains the right to pick up the ball.

There’s lots of laws around this action, like having to join in the ruck only from behind your own player and having to be on your feet to touch the ball. It is nothing like the mad pile-on in football for a loose ball. In a ruck, it is all about choreographed maneuvers. They say if you don’t know how to do the ruck, you’ll lose possession of the ball 90 percent of the time.

But until you get familiar enough to appreciate all those intricacies, just hold your breath for a short moment until you see who comes out with the ball, because rucks only last about five seconds. Longer than that, and the ref calls for a scrum.

The scrum. Scrums settle disputes of ball possession, like an unresolved ruck, or if there’s a penalty, like a high tackle or offsides with the ball (knock-on). “You can relate it to hockey. It’s essentially a face-off,” Cahill says.

“Both teams interlock arms and heads, and the ball is rolled into the middle of the scrum by the team who won the penalty,” Cahill says, giving that team the advantage. “It’s literally a brute force push of six guys on six guys.” Like a reverse tug-of-war.

The goal is to hook the ball (kick it back into the midst of your own scrum players) and out of the scrum to your waiting player who gains possession and play begins again. Sometimes one side pushes the whole scrum right to the end zone, scoring as many points as a try (touchdown).

As with any sport, there’s far more to this game than shared here. There’s barrels of nuances, strategies, movement of the ball, and use of the players.

It’s straightforward, action-packed, always in motion with options of kicking, passing and running all in one play. Even the conversions after a try happen fast. They must be taken within 30 seconds of the try being scored. And they’re done as a drop goal (kicking the ball after  bouncing it off the ground). This is a step up in complexity from the traditional college, or NFL, place kick and all without the time suck of special teams.

Now you’re thinking, hey, this is getting mighty interesting, but 90 minutes of this endless, intense action is too much. Rugby has a solution for that. Just as American football has tried an indoor arena version to heighten the action, rugby came up with Sevens.

Sevens refers to the length of each half and the number of players on the field, almost half the usual 15. Which is what the longer version is called—Fifteens. In Sevens, it’s all about completing a tournament in a day or a weekend.

Sevens has generated its own unique attitude of goofy devotion among fans. “Sevens fans go there for the entertainment atmosphere,” Cahill says. “You don’t have to be a rugby fan. You just go because the atmosphere is so incredible.”

Great for multi-nation tournaments, the shorter match draws in fans from long distances for weekends packed with fast, quick competitions chock full of diverse action from teams that might come from three different continents.

“For Sevens, tailgating is literally the entire event. There’s music played throughout to get people dancing. There’s costumes,” Cahill says. “Because fans are literally there from 10 in the morning to 8 p.m., so you have entertainment between games, dressing up, walking and talking and representing your country.”

Costumes are rampant, usually coordinated to match the person or group you came with. “There could be a bunch of people in banana costumes. There was a lot of Freddy Mercury this year,” laughs Cahill. It’s kind of like Mardi Gras meets sports.

Sevens has brought rugby back—for both men and women—to the Olympic arena after 92 years. Debuting in 2016 in Rio, the six-day Sevens competition included 288 competitors from 14 nations. The U.S. men’s team missed out on the quarterfinals by a point-difference of one. The women, however, won fifth place in the games, falling only two slots short of medaling.

And the biggest nod to the growth of rugby in this country, was the Rugby World Cup for Sevens being played in San Francisco last year. The first-ever Rugby World Cup hosted on American soil, drawing in 100,000 crazy, wild, devoted fans from around the globe. 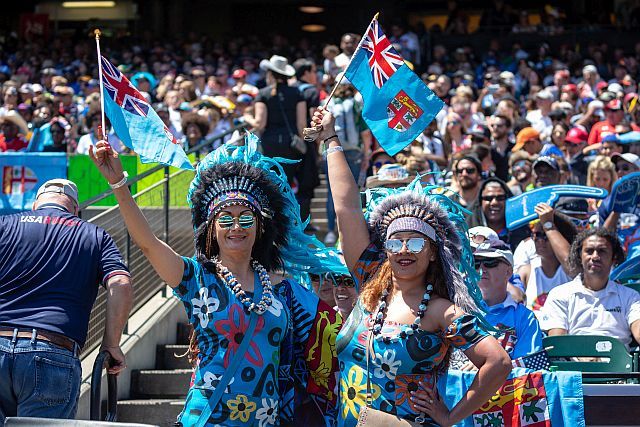 An old British saying goes, “Rugby is a ruffian’s game played by gentlemen.” It’s still true. The competition is fierce but the culture is built on respect. Not just among the players, but for the refs and the fans. “This is a tough contact sport, but it has a strong values-based culture,” says MLR Commissioner Howes. “It’s all about community. And every fan—whether they’re bringing their family to the game on Saturday afternoon, watching live on TV on Friday night prime time, or catching up with highlights on their phone—is a part of the community.”