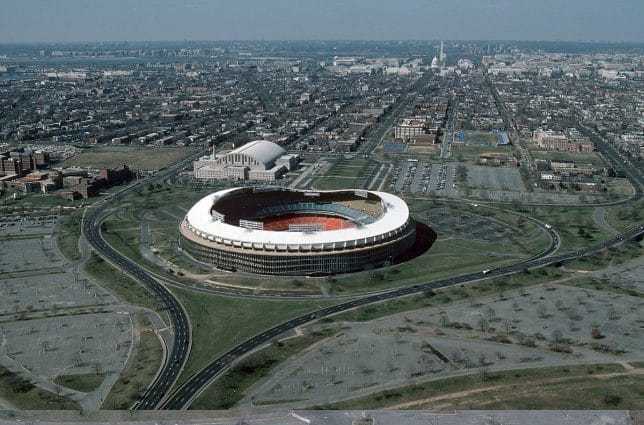 Barely 20 years after leaving the metro D.C. area for greener pastures in Landover, Maryland, Washington Redkins owner Dan Snyder is openly expressing his desire to bring the Redskins back to D.C. According to a report in the Washington Post, Snyder is soliciting help from the Trump administration and congressional Republicans to clear a path for the construction of a new 60,000-seat stadium on the site of the club’s former home, RFK Stadium.

The Post’s report claims that Snyder is working with local D.C. officials as well as key Republican members of Congress to include a stadium provision in a spending bill before the end of December. If passed, the provision could allow for the development of a 190-acre commercial development and stadium on the site of RFK Stadium, just three miles from the U.S. Capitol building.

By including the stadium language into the bill, team officials could avoid public debate on the politically fractious issue. While a new stadium would be the centerpiece of the new development, some local and federal officials, such as D.C. Council member Charles Allen, believe the property should be used for other purposes, such as affordable housing.

The Redskins moved into their current home, FedEx Field (originally named Jack Kent Cooke Stadium) in 1997, however, the stadium has not been free of controversy over the years. Many fans have complained about the stadium since it first opened, saying it doesn’t have the same vibe as RFK, and Sports Illustrated once ranked FedEx Field 28th out of 31 stadiums in terms of fan experience. As early as 2007, Snyder met with officials about the possibility of moving the team back to D.C., as well as with Virginia governor Terry McAuliffe.

Robert F. Kennedy Memorial Stadium – known to the world as RFK Stadium – opened in 1961 and was the home to the Redskins for 36 years, and was used by D.C. United of Major League Soccer until the club’s new soccer-specific stadium opened in July 2018. The Redskins current lease at FedEx Field is set to expire in 2027.