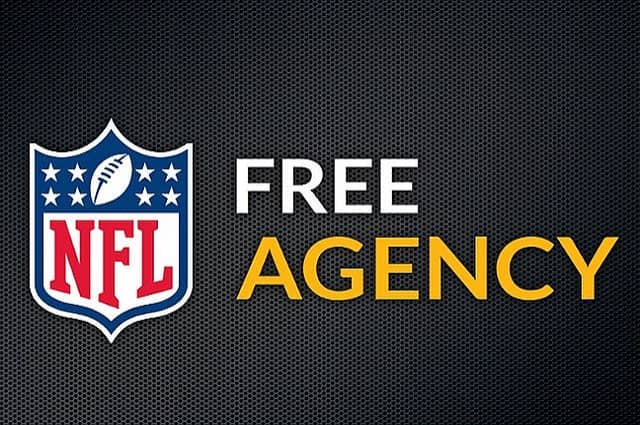 With the start of NFL training camps less than a month away, the big splashes are over in free agency. Some franchises got much better while others stayed the same. There are still some big names out there on the market, but those signings may not happen until later down the road when teams are looking to add players for depth reasons. Let’s take a look at how each team in the NFL did in free agency.

New York Giants: The Giants spent big in free agency and landed one of the most coveted receivers in Kenny Golladay. They made a smaller move by adding TE Kyle Rudolph to take some pressure off Evan Engram.  They also improved defensively by adding CB Adoree’ Jackson and with the re-signings of OT Nate Solder and DE Leonard Williams. Grade: A

Dallas Cowboys: The Cowboys took care of priority number one which was re-signing QB Dak Prescott to a big deal. They also gave him protection with the signing of OT Ty Nsekhe and added on defense with S/LB Keanu Neal and S Damontae Kazee. Nothing splashy but some needed depth. Grade: A

Washington Football Team: With a lack of a quality talent available, the team added Ryan Fitzpatrick as their starting QB.  He’ll be a good short-term bridge at the position.  They also signed playmaker Curtis Samuel at wide receiver and will have an offense that will be competitive to go with an already strong defense. Grade: A-

Philadelphia Eagles: The Eagles had practically no money coming into the offseason and they are still on the hook for a lot of Carson Wentz’s contract. They didn’t do much because they weren’t able to do much. Signing Super Bowl-winning QB Joe Flacco to mentor Jalen Hurts was probably their best move. Grade: D

Tampa Bay Buccaneers: The Bucs made history by bringing back every single starter from their Super Bowl winning roster in 2020. They were able to re-sign LB Lavonte David, WR Antonio Brown, RB Leonard Fournette, DT Ndamukong Suh, and give a big contract to LB Shaq Barrett. On top of that, they franchise tagged WR Chris Godwin. This was a masterclass on salary cap for the Bucs. Grade: A+

New Orleans Saints: The Saints made it their mission to hold onto Jameis Winston and they did just that so he can battle it out with Taysom Hill for the starting QB role. After that, the Saints weren’t able to accomplish much with their limited salary cap availability and questions about the direction of the franchise post the retirement of Drew Brees. Grade: C-

Carolina Panthers: Goodbye Teddy Bridgewater, hello Sam Darnold. Carolina was wheeling and dealing in the trade market, and they spent big in the free agency market too. But it feels like they may have overspent for guys like OT Cam Erving, C Pat Elflien and LB Haason Reddick. Grade: C-

Atlanta Falcons: Atlanta has a new GM and a new head coach, and they didn’t do much in their first offseason together. The Falcons weren’t able to dump Matt Ryan’s contract and their biggest signing was running back Mike Davis. They will also need to replace WR Julio Jones. Grade: F

Green Bay Packers: The Packers had an interesting offseason, huh? Their free agency run wasn’t much better than the Aaron Rodgers drama as they let C Corey Linsley walk and paid way too much to keep RB  Aaron Jones around after drafting a running back in round two in 2020. Grade: C-

Detroit Lions: The Lions don’t have much of a receiving corps after letting Marvin Jones and Kenny Golladay walk. They added some veterans on defense and brought in Breshad Perriman to compete at wide receiver. It seems like a rebuild year in Detroit and it will be interesting to see how new QB Jared Goff performs without all of the weapons he used to have. Grade: D+

Chicago Bears: The Bears were in the Russell Wilson rumors. That fell flat so they did the next best thing (not really) and signed Andy Dalton. It’s just a matter of time before first round pick Justin Fields assumes the starting role. They cut CB Kyle Fuller to clear room for who I assume was Wilson. Nothing else positive except franchise tagging WR Allen Robinson II. Grade: F+

Minnesota Vikings: The Vikings signed CB Patrick Peterson from Arizona and allowed their young, developing S Anthony Harris to walk which made no sense and then watched as TE Kyle Rudolph and OT Riley Reiff exited. They did sign DT Dalvin Tomlinson and LB Nick Vigil. Not a great offseason in Minneapolis. Grade: D

Arizona Cardinals: Anytime you add a player like J.J. Watt, it is a pretty good offseason. The Cards got way better on defense with his addition and they also signed WR AJ Green and traded for C Rodney Hudson to help out the offense. I like what Arizona did as they try to be contenders. Grade: B+

San Francisco 49ers: The Niners wasted no time paying T Trent Williams to be the league’s highest paid offensive lineman. They also signed C Alex Mack who should help make this offensive line elite. They could have used a new running back and some secondary help, but it wasn’t a terrible offseason. It will be interesting to see if QB Trey Lance takes the field this season. Grade: B-

Seattle Seahawks: Holding onto QB Russell Wilson was the biggest win and trading for G Gabe Jackson to protect him was their second-best move. The Seahawks upgraded their line and signed TE Gerald Everett and CB Ahkello Witherspoon who will add great depth on both sides of the ball. Grade: B

Los Angeles Rams: The Rams did re-sign LB Leonard Floyd, but they overpaid for WR Desean Jackson who doesn’t have much left to offer. Their biggest move was getting QB Matthew Stafford via trade, but I wasn’t thrilled with any of their other free agency moves. Grade: C

Buffalo Bills: The Bills turned heads when they brought in QB Mitch Trubisky but we all know his impact will not be felt unless Josh Allen gets hurt. The Bills were successful in retaining LB Matt Milano and OT Daryl Williams who are two blue chip pieces on the Bills roster. They didn’t upgrade much other than adding WR Emmanuel Sanders to replace John Brown but they didn’t really need to either. Grade: B

New England Patriots: Bill Belichick doesn’t historically spend money so this was a weird offseason for the Patriots who brought in names like TE Jonnu Smith, TE Hunter Henry, WR Kendrick Bourne, WR Nelson Aghlor, and LB Matt Judon. I think the Pats realized they needed a big change to their roster, but I feel like they overspent on day one. Grade: C+

Miami Dolphins: The Dolphins are usually a team that makes a lot of noise in free agency, but they didn’t have to this offseason because so many of their signings have been hits and are working out for them. I liked the addition of Will Fuller who could be a top wide receiver in the league if he just stays healthy. Grade: B

New York Jets: New coach, new quarterback and money to spend. The Jets went for it with the signings of Corey Davis and Keelan Cole for the receiver corps. The defense picked up DT Sheldon Rankins and S Lamarcus Joyner, but their best signing was DE Carl Lawson. Grade: A

Baltimore Ravens:  Signing G Kevin Zeitler was probably the best move that the Ravens made to make sure that they can keep QB Lamar Jackson safe. It also sounds like a new deal is being worked out for the former MVP. I wish they’d upgraded at wide receiver more than just Sammy Watkins, but they missed out on the other top guys like Juju Smith-Schuster. Grade: C+

Pittsburgh Steelers: The Steelers had very tight cap-space restraints and it showed when they had to dump LB Bud Dupree, G Matt Feiler and CB Mike Hilton. Many wanted them to go after J.J. Watt, but they just didn’t have the cap money to do so. They re-signed WR Juju Smith-Schuster which was odd and didn’t do much outside of that. Grade D+

Cleveland Browns: The Browns already had an incredibly impressive offense, but they needed some defensive chips and they got just that. They upgraded their secondary with CB Troy Hill and S John Johnson III and got a pass rusher in DT Malik Jackson. Adding Jadeveon Clowney was icing on the cake. They killed it. Grade: A+

Cincinnati Bengals: Protecting Joe Burrow was priority number one for the Bengals this offseason They gave OT Riley Reiff a good chunk of money for a 32-year-old, but he isn’t the long term option they needed. They made solid defensive moves in getting CB Mike Hilton, LB Trey Hendrickson, DT Larry Ogunjobi and CB Chidobe Awuzie, but this wasn’t the focus they should have prioritized. Grade: C

Houston Texans: The Texans offseason was a mess. In free agency, they went veteran heavy with RB Mark Ingram and CB Terrance Mitchell.  They traded for OT Marcus Cannon and LB Shaq Lawson.  They realized they needed some locker room balance and maybe they’ll get it, but they won’t have a winner this year, especially if QB Deshaun Watson is gone. Grade: C

Indianapolis Colts: They traded for Carson Wentz which doesn’t count in this grade, and they retained long-term pieces like CB Xavier Rhodes, RB Marlon Mack and receiver T.Y. Hilton. The Colts were very quiet otherwise but didn’t need to be very loud with a lot of young weapons. Grade: C

Jacksonville Jaguars: The Jags brought in some pieces to help their new quarterback Trevor Lawrence with the signing of a very underrated wide receiver in Marvin Jones and even signed a tight end who hasn’t been in the league for some time. Outside of that, Jacksonville improved defensively by adding DE Jihad Ward and CB Shaquill Griffin. Grade: B

Tennessee Titans: Trading for Julio Jones was a trade that won the offseason, but free agency was a different story. They shaved cap space by cutting CB Malcom Butler, CB Adoree Jackson, and S Kenny Vaccaro and they let TE Jonnu Smith walk. But they did hand out money to LB Bud Dupree and they will be contenders. Grade: B-

Kansas City Chiefs: The Chiefs were struggling with cap room entering this offseason and had to make some difficult decisions regarding cutting vets. They let offensive tackles Eric Fischer and Mitchell Schwartz walk, although injuries were a concern, and decided to go with cheaper options on the offensive line in G Joe Thuney, G Kyle Long and C Austin Blythe. Grade: C+

Las Vegas Raiders: I am not sure what Vegas was doing this offseason. They desperately needed some offensive weapons which they didn’t get and then overpaid for RB Kenyan Drake and DE Yannick Ngakoue. Coach Jon Gruden and GM Mike Mayock are just pushing buttons up in the control room and waiting to see what happens. Grade: D

Los Angeles Chargers: Protect QB Justin Hebert. The Chargers did that by signing, and maybe overpaying, but at the very least signing C Corey Linsley and OT Matt Feiler. The Chargers lost TE Hunter Henry but did re-sign Jared Cook to replace him. I’ll take the offensive line upgrades as a huge win. Grade: B+

Denver Broncos: The biggest move for the Broncos was re-signing Justin Simmons who is now the league’s highest paid safety. They also added cornerbacks Ronald Darby and Kyle Fuller to what should be a top secondary in the NFL. I am concerned about the offense though after the loss of RB Philip Lindsey and the addition of no one else that will have an impact. Grade: B