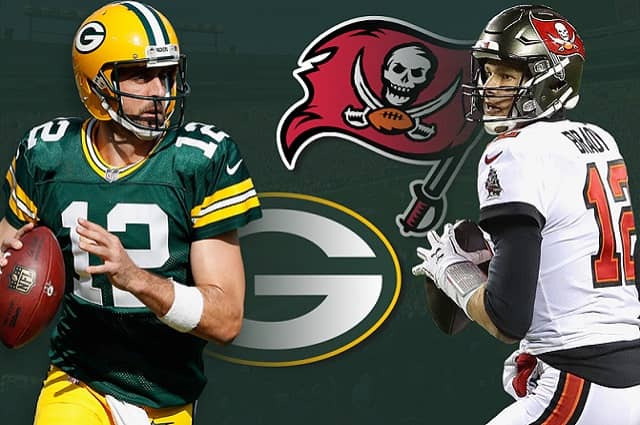 The Tampa Bay victory over New Orleans last weekend earned them a date with the Green Bay Packers in the frozen tundra that is Lambeau Field for the NFC Championship game this Sunday. There was something special about watching Tom Brady and Drew Brees go at it in the divisional round in what was probably the last game of Brees career.  Watching two certain first-ballot Hall of Famers battle was something special as both approach the sunset of their careers.  Brees did not have his best game and ultimately, the Bucs defense stepped up big time intercepting Brees three times including twice on the final two Saints possessions.

The Packers took care of a Rams team that didn’t have much going for them with an injured Aaron Donald and banged up Jared Goff. Aaron Rodgers, the first team All-Pro selection at quarterback this season, continued to prove why he should also be this year’s league MVP.  The Pack ran away with Saturday’s game winning 32-18 as Rodgers threw for 296 yards and two touchdowns, including one to Davante Adams who led the team with nine receptions.

The Bucs and the Packers already played once this season back in Week 6 and Tampa Bay dominated. Down 10-0 early, the Bucs scored 38 unanswered points and didn’t allow another score in a 38-10 beatdown. This Packers team is not the same one from that game but the same can be said about the Bucs.

Green Bay has a defense that has been much better in recent weeks, allowing opponents to average just 16 points in their last four contests. The play from their defensive line has been outstanding, while also getting Pro Bowl level play from hidden gems like undrafted rookie free agent Krys Barnes out of UCLA who is starting at linebacker this week against the Bucs.  He and the rest of the front seven are a big reason for Green Bay’s success.  “I think their defense is really, really playing well,” said Arians. “Their young secondary, a couple of guys are playing outstanding. Their pass rush is good.”

For the Bucs, they are a team that has a more solid foundation than that game back in Week 6.  The offense seemed to struggle at various times earlier in the season as it seemed that Brady wasn’t able to communicate well with receivers and that the Bucs were abandoning the running game too soon.  Now that Brady has gotten comfortable with his new offensive teammates, the Bucs are scoring at an extremely high clip.  They are averaging nearly 37 points per game their last five games including the playoffs. Now, Brady looks like his vintage self and the running game has gone for over 100 yards in each of their last four games.

Tom Brady’s first playoff run in the NFC has already been special and seeing him go up against guys like Brees and now Rodgers seems too good to be true. The Packers and the Bucs should be ready for a shootout, but they’ll have to get it done in below-freezing weather and the snow come Sunday. The game starts at 3:05 pm ET on FOX.