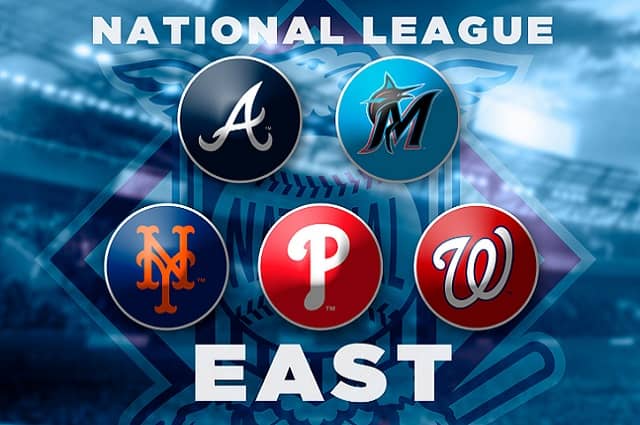 Hallelujah, baseball is back. After a grueling MLB lockout, it is nice that players have reported for Spring Training and that the season is nearly here. It was a great 2021 season where the Braves knocked off the almighty Dodgers and Astros on their way to a World Series victory. We saw the emergence of new superstars, different teams rise to the top, and former powerhouses sink to the bottom. With the season fast approaching, let’s catch you up on everything you may have missed and what you need to know with our MLB predictions. Here is a preview of the NL East.

Arguably the worst division in 2021, it is shocking that the World Series winner came from the NL East. The Braves won just 88 games in the regular season but got hot at the right time and danced through the postseason. The Mets missed out on the postseason with just 77 wins and fired their manager. All the money the Phillies have spent in recent years didn’t do much as they finished second with 82 wins. At the bottom, the Marlins and Nationals won less than 70 games and have lots of questions entering 2022 as they look to be in rebuild mode. The Braves were the surprise of the postseason and got the job done without their best young player, Ronald Acuna Jr. He will be back this year and looking to wreak havoc.

Braves – 1B Matt Olson – This has been one of the biggest post-lockout trades to go down. Freddie Freeman is no longer a Brave and Matt Olson has his old position with a whole lot of cash that Braves fans expect to be put to good use.

Mets – P Max Scherzer – Mad Max cashed in for maybe the last time in his career. He now pairs with Jacob DeGrom in what should be a very fun rotation for the Mets.

Phillies – OF Bryce Harper – This one is obvious. Harper is coming off an MVP season, but his team is still losing. Time for him to figure out how to be great and win at the same time.

Marlins – 2B Jazz Chisholm – Get used to the name. He used to be one of the top prospects in all of baseball and now tries to prove himself at the big-league level. He had a mediocre rookie season but can change that around in his second full year as a starter.

Nationals – OF Juan Soto – One of my favorite players in all of baseball, Soto is a legit star and has the numbers to back it up. He put up an MVP-like season but fell short in the voting to Harper.

The NL East has been busy. The Mets lost SS Javier Baez and P Marcus Stroman but have signed P Max Scherzer, OF Starling Marte, P Adam Ottavino and traded for P Chris Bassitt. The Braves will not bring back 1B Freddie Freeman, but they did grab Olson and gave him a ton of money. The Phillies and the Marlins have been relatively quiet, while the Nationals haven’t done much outside of adding DH Nelson Cruz and losing 1B Ryan Zimmerman to retirement. Cruz will serve as one of the first intentional DH signings in the national league.

The Braves may struggle to find themselves as they lose the heart of their franchise in Freddie Freeman. Everyone has been waiting for this Mets team to finally turn a corner, I think new manager Buck Showalter will get them there while the rest of these teams look on and wonder what they are doing wrong. Division Winner: New York Mets 91-71