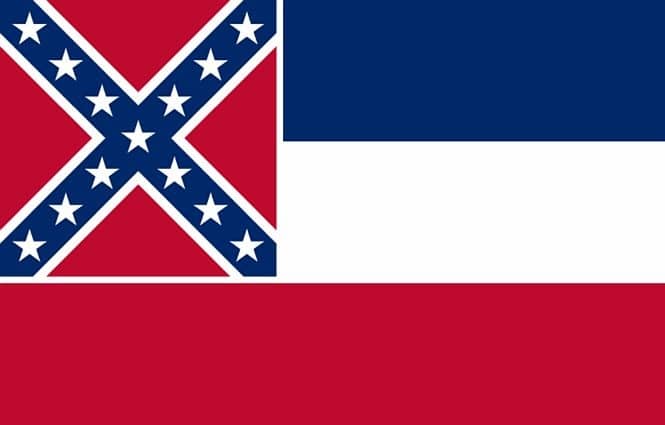 Amidst the backdrop of Black Lives Matter protests Mississippi lawmakers voted Sunday to retire the Confederate battle emblem from its state flag.  It is the only state flag that continues to feature the banner of the Confederacy – a blue cross with 13 white stars.

Mississippi’s House and Senate voted in succession Sunday afternoon to retire the flag, with broad bipartisan support. Republican Gov. Tate Reeves has said he will sign the bill, and the state flag would lose its official status as soon as he signs the measure.

“I am proud of our universities’ leadership, and the engagement of student-athletes and coaches in the efforts to change the State of Mississippi flag,” Sankey said in a statement after Sunday’s vote. “The agreement to remove the Confederate battle emblem from the flag is a positive and appropriate action, and I applaud the Mississippi House of Representatives and Senate for today’s action. I am also grateful for Governor Reeves’ openness to sign a bill to change the flag. As I have frequently said, our students deserve the opportunity to learn and compete in welcoming environments. Today’s action is welcomed in the spirit of this goal.”

A day after the SEC’s warning, the NCAA expanded its Confederate flag policy to prohibit all its championship events from being held in the states where the flag is flown.

“We are pleased the Mississippi legislature has acted swiftly to remove the Confederate battle emblem from the state flag, and we look forward to Governor Reeves signing this bill,” NCAA president Mark Emmert said in a statement.

“It has too long served as a symbol of oppression, racism and injustice. We welcome this important move by state lawmakers to remove the symbol from prominence in the state, which will also open the opportunity to host NCAA championships after the recently expanded championship policy.”

In 2015, the NCAA allowed South Carolina to host championships again after the state stopped flying the Confederate flag at its state Capitol following the murder of nine members of the historically black Emanuel African Methodist Church in Charleston.

“We removed the flag from our campus five years ago, so we’ve made it clear that it doesn’t represent who we are at Ole Miss,” Kiffin told ESPN last week. “Today is another big step in doing our part to move the state forward and ensure a more welcoming environment for everyone. This is extremely important to me and to our players. Time to change!”

White supremacist legislators added the Confederate emblem to the Mississippi state flag more than a century ago, a generation after the South lost the Civil War. The Ku Klux Klan and other hate groups have waved the rebel flag for decades. Georgia put the battle emblem prominently on its state flag in 1956 during a backlash to the civil rights movement. That state removed the symbol from its banner in 2001.

Mississippi Republican House Speaker Philip Gunn, who is white, has pushed for five years to change the flag, saying that the Confederate symbol is offensive. The House passed the bill 91-23 Sunday afternoon, and the Senate passed it 37-14 later.

Once the governor signs off, a commission would design a new flag that cannot include the Confederate symbol and that must have the words “In God We Trust.” Voters will be asked to approve the new design in the Nov. 3 election. If they reject it, the commission will set a different design using the same guidelines, and that would be sent to voters later.