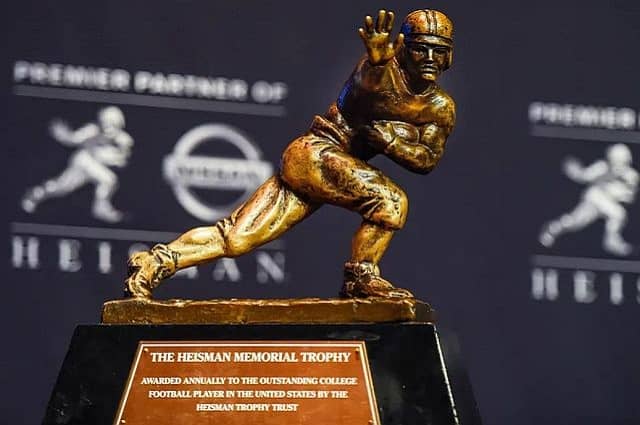 The candidates are Alabama quarterback Bryce Young, Michigan defensive end Aidan Hutchinson, Pittsburgh quarterback Kenny Pickett, and Ohio State quarterback C.J. Stroud. The betting favorite is Bryce Young who is one of two players to lead his team to the College Football Playoff along with Hutchinson.

Here is why Young is not only the favorite but will win the Heisman. For starters, we know that this has basically become a quarterback’s award. Last year was a shocker when wide receiver DeVonta Smith won the award. But since 2000, 17 of the winners have been quarterbacks. So, apologies to Hutchinson, but he can kiss his chances goodbye. In fact, the last time a defensive player won the award was 1997 when another Michigan man, Charles Woodson, took home the hardware.

Young is truly the best candidate. He has gotten Alabama into the playoff with just a single loss, to Texas A&M, and a major upset victory in the conference championship over Georgia. He had 4,322 yards and 43 touchdowns with just four interceptions on the season. All those numbers are better than Pickett and Stroud. Last week against Georgia, he really went off, passing for over 400 yards and three scores. He tied the record for most touchdowns thrown by an Alabama QB in a season and most passing yards in a game.

While Alabama has not necessarily looked like the most dominant team at times this season, Young has been consistent, and I would say is the main reason for the Crimson Tide making it into the playoffs. Young has all the tangibles of a Heisman Winner and with the betting odds already set at -5000, Vegas knows better than anyone that he will take home the trophy.

I believe C.J. Stroud, Aidan Hutchinson, and Kenny Pickett will finish in that order as the next three finalists. Other potential candidates for the award were LB Will Anderson Jr. from Alabama, RB Kenneth Walker III from Michigan State, and QB Matt Corral from Ole Miss. Those three players will not be invited to the presentation in New York.

There are also a couple of players who certainly disappointed over the course of this season. We saw disappointing results from the preseason expected winner Spencer Rattler who didn’t even finish the season as the starting QB for the Oklahoma Sooners and will transfer this offseason. The second preseason betting favorite, Clemson’s D.J. Uiagalelei, is unlikely to be the Clemson starter next season. Young entered as the third betting favorite and will now take home the award on Saturday.