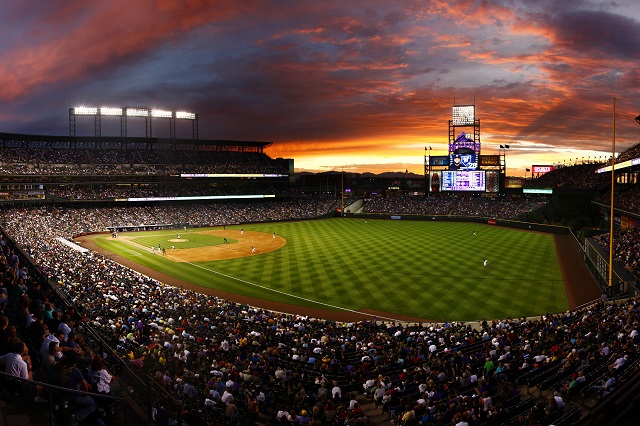 Denver scales the pinnacle of enticement for sports fans. And beer fans. And food fans.

Cait Kennett didn’t have a lot of time before the first pitch. She and a carload of friends had left Glenwood Springs, in western Colorado, at 7:45 a.m. They drove through the mountains and over the passes, successfully navigating early spring’s unpredictable weather. The crew pulled into Denver at 11 a.m., which left just enough time for brunch before the 1:05 p.m. game.

The Colorado Rockies’ home stadium, Coors Field, doesn’t allow tailgating. And frankly, the Glenwood group had little time for a full-on tailgate. But the ViewHouse Ballpark (viewhouse.com) a block from the stadium offered an affordable brunch of local, organic foods and a Bloody Mary bar. Problem solved. 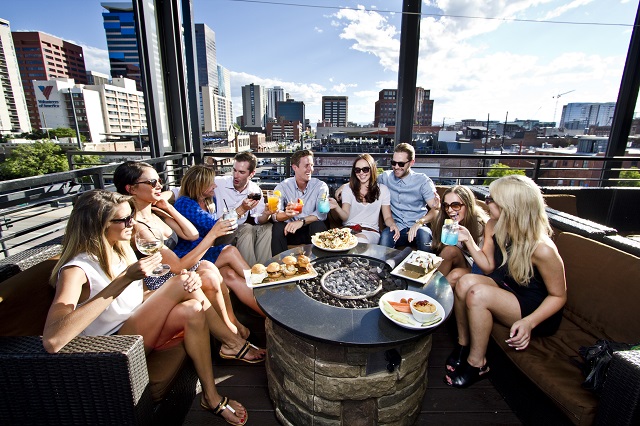 That’s the glory of this city set 5,820 feet over the western plains at the edge of the towering Rockies. Denver breathes sports. They build stadiums for anyone and surround them with a vast array of options to feed fans and quench their thirsts. Then it offers diversions to make die-hard sports fans want to stay—from shooting white water rapids to scaling 14,000-foot peaks to coming face-to-face with massive elk while hiking. And no matter the season, at least one of Denver’s five pro sports teams will offer up some action.

In baseball season, it’s hard to beat the convenience of Coors Field, which is nestled into Denver’s LoDo (lower downtown) neighborhood. Yeah, the lack of formal tailgating can be a challenge for traditionalists. But the baseball stadium lies only a short walk from a number of breweries. Colorado is home to 348 craft breweries, according to the Brewers Association, making it third in the nation for quantity.

If you’d rather set up in a restaurant, though, you’ve got choices. Lots of ‘em. Hayter’s & Co. (haytersandco.com) is popular for its $12 all-you-can-drink Coors Light special, which goes into effect two hours prior to most Rockies home games. If you can’t give up your craft preference in favor of the local classic, Hayter’s also offers a variety of happy hour specials. The food menu spans pub favorites, as well as specialties like candied mango-habanero bacon, yucca fries and boozy ice cream sandwiches. Whatever your pleasure, celebrate that the ballpark is only a half block away.

Let’s say you can’t let go of your yen for craft beer, but your group can’t agree on a brewery. Opt for Falling Rock Tap House (fallingrocktaphouse.com). With more than 75 beers on tap (and a cooler full of other options), your entire group is sure to be satisfied. The food fare’s nothing to sneeze at, either, with made-from-scratch items that include gluten-free and late-night options.

But what if your group is especially picky and unable to settle on one type of cuisine or drink? It’s Avanti Food and Beverage (avantifandb.com) to the rescue. The food hall offers seven restaurant concepts, ranging from American cuisine to tacos to seafood, tucked into modified shipping containers. It creates an experience as aesthetically stimulating as it is tasty. Perhaps best of all, it’s within a mile-and-a-half of four of the city’s major sports arenas.

The 16th Street Mall (denver.org)—a mile-long pedestrian promenade—offers dozens of dining options, as well as shopping a plenty. Sports Column (denversportscolumn.com) is also a top choice for Rockies fans, thanks to an outstanding rooftop patio and several game-day specials, including a $10 burger and beer deal. Or if you’re more concerned with getting to the game on time, a ticket to The Rooftop (www.mlb.com/rockies/ballpark/rooftop) may be your best bet. The Coors Field hotspot is open to all ticketholders, but a $15 standing-room-only ticket includes $6 in concession or merchandise credit.

Soccer fans will have to roam further afield to find the MLS Colorado Rapids. Based at Dick’s Sporting Goods Park in Commerce City just a few miles north of Denver, their season starts before baseball and rolls right into football season. But eateries abound, including sushi, pub fare and authentic Mexican within five miles of the soccer complex.

Hockey and basketball fans will find just as much cause to celebrate in Denver when the NHL Colorado Avalanche and the NBA Denver Nuggets resume their seasons this fall. Both teams play at the Pepsi Center downtown, one mile from Coors Field. That close proximity means all of the Rockies’ fans options lay open, whether walking, taking a bus or relying on ride-sharing apps to shuttle them to games.

No transportation is needed to reach Brooklyn’s sports bar, a fan favorite located feet from the arena. (Football fans, have no fear. There’s also a location just outside of Mile High Stadium.) The bar boasts comfort food and affordable pitchers of beer.

Speaking of football, Broncos fans are best positioned for a true tailgate. Just ask Joe Trussell. He moved to Denver 23 years ago, and never considered himself a pro football fan. But as a graduate of Louisiana State University, he knew something about tailgating. The school nearly always lands on Tailgater Magazine’s Top 25 college tailgates, and Trussell brought that spirit out West.

For years, he has injected tailgating into concerts at Red Rocks—the all-natural, solid rock amphitheater set in the foothills just outside Denver. Trussell would park his Volkswagen van and set up in the venue’s parking lot, especially before jam bands.

Five years ago, inspiration struck, and Trussell negotiated a deal with his neighbors who are Denver Broncos season ticketholders. He would purchase a VIP parking pass, coordinate food, and transport his neighbors to and from games. All they needed to do was provide him with a football ticket.

They agreed. Trussell’s tailgating work now begins on Fridays, when he smokes pork shoulders. On Saturday, he cooks a pot of jambalaya before loading up and heading to Mile High. It’s a relatively simple setup, he says, they arrive, pop a top, crank up the music, and turn on the TV.

“We get people from giant RVs coming over and asking if they can hang out at our tailgate. So we must be doing something right,” he says with a laugh. When the Broncos play in the evening, Trussell and friends rely on Brooklyn’s rather than facing a late-night tailgate cleanup.

Paid tailgates offer an easy option for visiting fans, and Trussell also recommends bars and restaurants outside of the city’s other sports stadiums. Light rail trains make it easy to access those areas from most of the city, and they also deliver fans within a short walk of their chosen events.

“I’ve been to Cowboys games, Saints games, Falcons. I’ve been to Lambeau,” he says. “I’ve never been anywhere like Mile High Stadium.” 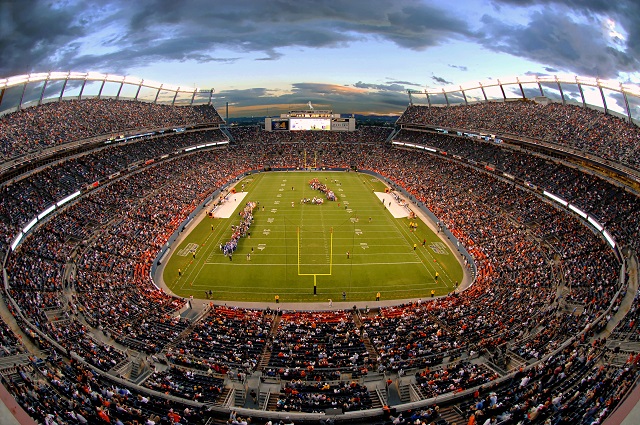 You can argue about which city offers the best craft breweries in the nation. But with its plethora of options, Denver has to be a contender. Here are five to check out within a couple miles of the city’s sports arenas.

Crooked Stave Artisan Beer Project (crookedstave.com). Like your beer a little funky? This is the place. Crooked Stave specializes in funk, with saisons, sours, wild ales and Brettanomyces-fermented beers.

Great Divide Brewing Company (greatdivide.com). Get a taste of one of the city’s best-known breweries at Great Divide’s ballpark tap room. Take a tour and dine at one of the regularly scheduled food trucks. Want another Great Divide experience? Head to the barrel room, a mile away, which offers the brewery’s full lineup.

Jagged Mountain Brewery (jaggedmountainbrewery.com). Taste a variety of styles at Jagged Mountain, whose lineup runs the gamut. The staff loves to explore the limits of styles, just as they explore their own limits in Colorado’s beautiful outdoors. They’ve also got food trucks lined up daily; check the website for a full calendar.

Oskar Blues Brewery (oskarbluesfooderies.com). You might know them as the company that started the movement back toward craft beer in cans. And Oskar Blues offers so much more—food, music and, of course, tasty suds to satisfy any palate.

Wynkoop Brewing Company (wynkoop.com). Visit Colorado’s first brewpub, Wynkoop. The brewery celebrates its 30th anniversary this year, and you can get in on the action with a public or private group tour. Or you could just order a burger, a beer and enjoy the atmosphere. We think that’s every bit as appropriate.