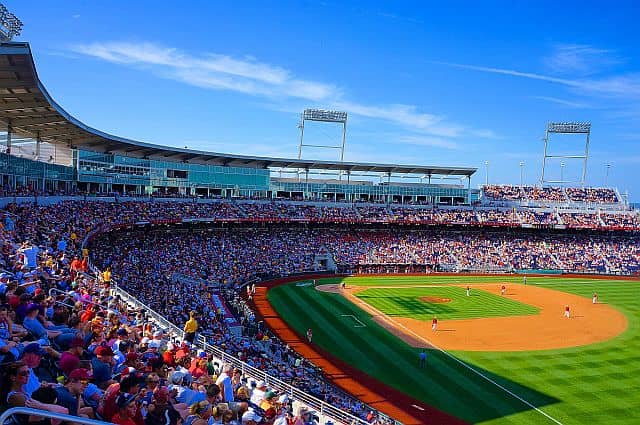 Move over, March Madness. The College Baseball World Series is here and after the selection show on Monday morning, the bracket has been unveiled. There were certainly some massive heartbreaks in there for many schools, particularly Baylor, Pittsburgh and Louisville. Some Texas teams like the Longhorns, Horned Frogs, and Red Raiders ran away with the show. And some conferences should be downright upset for how they fared in the shakeout.

The SEC led the way with nine schools cracking the field of 64 and the ACC was right behind them with eight teams themselves. The Big 12 was a bit of a head scratcher after getting three teams into the top eight, they were limited to just one other team in the entire round of 64. The Big 10 was the biggest loser, however. They were given just three selections, losing out to Conference USA who had four teams selected.

There are 16 regional hosts in the College World Series. The teams that get to host their regionals get a huge advantage of obviously playing at home, but also getting their own fans in the stands, not having to travel, not having to stay in a hotel, and knowing their own field conditions better than anyone else.

To give you a brief overview of how this tournament works, here is a breakdown. At each regional site, there are four teams. The field this year includes 30 automatic bids via conference championships and 34 at-large entrants. The first round of play is known as the regional, and it’s a round-robin, double-elimination format. The winner of the regionals will move onto the super regionals, this will be a best of three-series between the teams.

Different from March Madness, there is only one top-seed in the entire bracket that is designated the number one overall ranking. This year it belongs to the Arkansas Razorbacks and rightfully so. This team went 46-10 with a 22-8 SEC conference record and won their final eight games of the regular season. They have the third most home runs in all D1 baseball and can beat you easily with power and speed.

Before the conference tournaments, you would have pegged Texas as the second-best team in the country, but they were upset, and TCU ended up winning the Big 12. This is somewhat reminiscent of Baylor in the basketball Big 12 tournament, and I do wonder if Texas can make the same postseason push the Bears did.