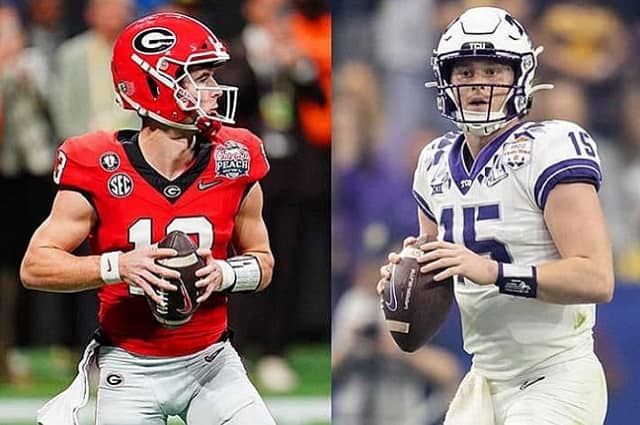 The stage is set and if you had told us that TCU was going to be battling Georgia in the College Football Playoff National Championship game before the season began, I would have asked you how much you had to drink and if you needed some help. However, the Horned Frogs have truly upset the college football world and proven that a preseason-unranked team can not only make the playoffs but compete with the supposedly “tougher conferences” like the Big 10. Here’s our CFP Championship game preview.

Georgia is a heavy-favorite entering Monday’s national championship. The betting line is 12.5-points which once again seems disrespectful to the Horned Frogs who have one of the most potent offenses in all of college football. Let’s preview the game, see if there can be an upset, and diagnose some key matchups.

How they got here

UGA capped off a national title a season ago with an even more impressive season in 2022, capping it off with an SEC title this time. Then they took on a well-rested Ohio State in the semifinal and while it took nearly every second, a major fourth quarter comeback, and a heroic effort from quarterback Stetson Bennett and the offense, the Dawgs pulled off quite the comeback and win that will now send them to play TCU.

The Horned Frogs were picked to finish somewhere near the bottom of the Big 12 this season under first year coach Sonny Dykes who actually benched Max Duggan to begin the season. He changed his mind, Duggan became a Heisman finalist, and the Horned Frogs went perfect in the regular season. This team wore their emotions on their sleeves after losing to Kansas State in the Big 12 Championship. They bounced back in a big way against Michigan in the Fiesta Bowl, pulling out a thrilling win to catapult them to this point.

What to Watch For

The TCU offense must show up and they have to take advantage of a usually strong Georgia defense that just allowed 41 points, their most in any game all season. You can bet that Kirby Smart let his guys have one night to celebrate and then chewed them out the next day for the secondary collapsing and allowing Buckeye QB C.J. Stroud to make some massive plays with both his legs and arms.

Their exposed defensive weakness in that CFP semifinal game can’t give their fans much confidence as Max Duggan can do both of those things extremely well and has been playing at a top level this season. The TCU defense is shaky at best, and they are going to need to strike early and often to prevent going down too far in this game. Some turnovers, like they had against Michigan, will certainly help.  An upset can be had if TCU’s offense puts on a nearly perfect performance.

Steely Dan once sang, “Only a Fool Would Say That” and maybe he was talking about me when he was singing it because I am picking TCU in this game. What they did to Michigan, how their defense created turnovers, and how Duggan responded in the biggest spots proved to me that they can hang with the big dogs. Pun intended.

This is the best offense that Georgia is going to face and after being exposed by Ohio State, you know that they could struggle against a TCU team that may have even more playmakers on that side of the ball than Ohio State.