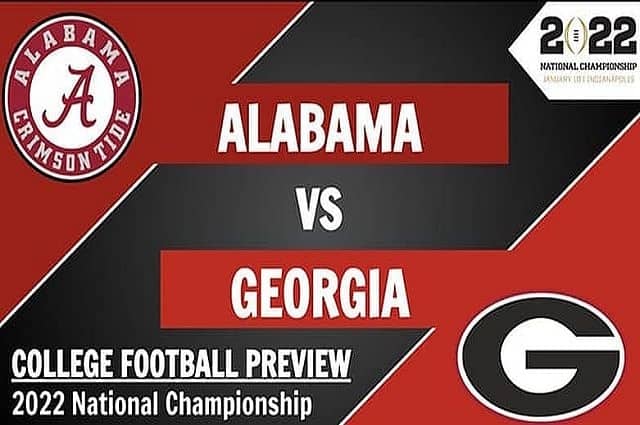 We’ve got an epic rematch brewing Monday for the College Football Playoff National Championship game.  The Georgia Bulldogs and Alabama Crimson Tide meet in the title game for the first time since their thrilling 2017 season matchup, which Alabama won 26-23 in overtime.

On New Year’s Eve Georgia annihilated Michigan 34-11 in the CFP Orange Bowl semi-final while Alabama glided past Cincinnati 27-6 in the Cotton Bowl to advance to the National Championship. These two teams each come in with one-loss and strong SEC play. The Bulldogs’ sole loss came at the hands of Alabama in the SEC Championship game, while the Tide had a midseason hiccup against Texas A&M.

The 2017 natty was one of the greatest championship games that we have ever seen. Alabama trailed 13-0 heading into halftime and head coach Nick Saban made a bold decision to bench starting QB Jalen Hurts for Tua Tagovailoa which sparked the Crimson Tide. The game went into overtime tied at 20. It was Georgia who scored first with a clutch 51-yard field goal off the leg of Rodrigo Blankenship, who now plays for the Indianapolis Colts. But the epic moment from that game came on the very next drive as the Tide faced 2nd and 26. Tua hit Devonta Smith, the eventual 2020 Heisman winner, in stride for a 41-yard touchdown to win the game and give Saban another ring.

It has been all Alabama since that championship game, as the two teams have met three times and Alabama has swept those contests. Two of those games were the SEC Championship game while the other was a regular-season contest.

Alabama has not dominated opponents this season as we have experienced with them in the past as they had a handful of close contests this season. A rare mid-season loss to Texas A&M had pundits doubting the Crimson Tide, but they rebounded and are taking an eight-game win streak into the championship game. Bryce Young was named the 2021 Heisman winner as he continues to carry an explosive Alabama offense that torched Georgia for 41 points in the SEC Championship game.

For Georgia, they were the best team in the regular season, ranking 1st in defense and 11th in offense. Their lone loss to Alabama shocked many as they were completely dominated in that championship game in Atlanta. There are questions about the QB situation in Athens and whether Stetson Bennett can keep pace with Young. The defensive line will be the biggest test for the Bulldogs, as they failed to record a single sack and had just four tackles for loss in that SEC Championship game.

Keys to the Game

Georgia – Pressure Young: This was the issue a few weeks ago, Young had all the time in the world, and he took advantage of it with over 420 yards passing and another 40 rushing yards. His stat line included four touchdowns, three through the air and one on the ground. Georgia must disguise blitz packages, get after the QB, and make him uncomfortable.

Alabama – Stop the Run: The Tide dominated the line of scrimmage and no Georgia running back had more than 38 yards in the SEC Championship game. If they want to stop the Dogs, stop the run.

For the second straight matchup between these two, Vegas has Bama pegged as the underdog by 2.5 points. That seems foolish to me. No team is more prepared than a Nick Saban team in a championship game.  Prediction: Bama 31 Georgia 23