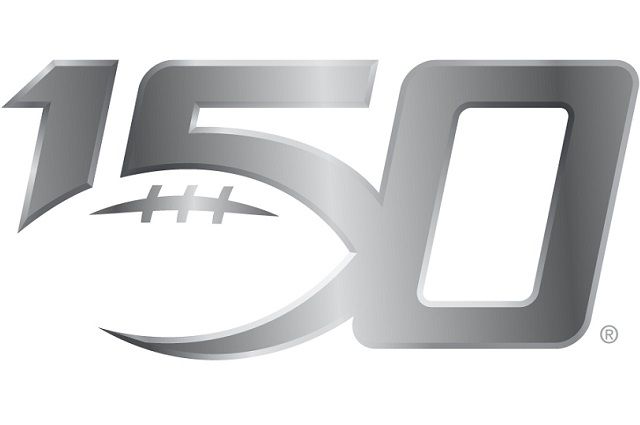 With the Villanova Wildcats and Colgate Raiders kickoff in Hamilton, New York, on August 24, this marked the beginning of something special—the 150th season of college football. To celebrate the occasion, the NCAA and College Football Playoff formed a nonprofit organization to plan and administer a national celebration of the sport’s anniversary.

The aptly named College Football 150th Anniversary (CFB150) will showcase the rich history and traditions of the sport and its contribution to American society, while also promoting the opportunity provided to thousands of student-athletes across all levels of college football.

The date of the very first college football game was November 6, 1869. Rutgers defeated Princeton by a score of 6–4. The game was played on a plot of ground where present-day Rutgers gymnasium now stands in New Brunswick, New Jersey.

This season, a number of special commemorations are scheduled during that Anniversary Week in November. They include recognition during the NFL’s Monday Night Football game between the Dallas Cowboys and New York Giants on November 4, the Miami (Ohio) versus Ohio game on November 6, a Rutgers University campus tribute on November 6, and the Princeton versus Dartmouth game in Yankee Stadium on November 9.

On college fields, the CFB150 anniversary logo may be seen on more than 200,000 uniforms and helmets of players from Division I through community college levels, in hopes of a nationwide blitz of exposure and celebration of football in America’s schools.

During game broadcasts this fall, networks will be airing unique content about the sport’s history. That special recognition will carry through into postseason as the 41 bowl games, playoffs and championship game celebrate the occasion.

Tailgater magazine talked briefly with CFB150 Executive Director Kevin Weiberg. For the past 40 years, Weiburg has been involved in the leadership of collegiate sports from the campus to conference level, including commissioner of the Big 12, working to expand the Pac-10 to Pac-12 while deputy commissioner and COO of that conference, and serving as a VP of the Big Ten Network. Noting that we didn’t expect him to predict the next 150 years, we did ask for his insights and forecast for college football over the next decade.

Any conference realignment on the horizon?

Conference membership change has been a fairly constant feature of the past 30 years. It isn’t a recent phenomenon. And I am sure that colleges and universities will continue to evaluate the competitive and financial arrangements that work best for them. So there may be additional changes, but it could also be a period of some stability. It’s really impossible to predict.

The Big Ten’s TV broadcast contract renews after the 2022 season. In 2025, the remaining Power 4 conference deals intermittently expire. With technology evolving and broadcast outlets shifting, how do you see football coverage changing?

College football will continue to be very valuable to media companies well into the next decade. Its ability to generate a large viewing audience will be increasingly important in a more fragmented media environment. Changes to the way the public views sports events may have an impact on ratings, but it could also bring new entities into the bidding process.

What player safety initiatives do you see happening?

The National Football Foundation, NFL, NCAA, college conferences and other entities are all engaged. That’s a good thing. I expect there will be ongoing efforts to consider rule changes and to promote best practices based on the significant research taking place. And the equipment will continue to evolve as it has over the history of the game.

Do you see the CFP expanding?

I don’t see any organized movement to expand the College Football Playoff at this time. The Football Bowl Subdivision members will have an opportunity to review the playoff model as the end of the current media agreement approaches in 2026.

Any of the great products featured in Tailgater magazine.