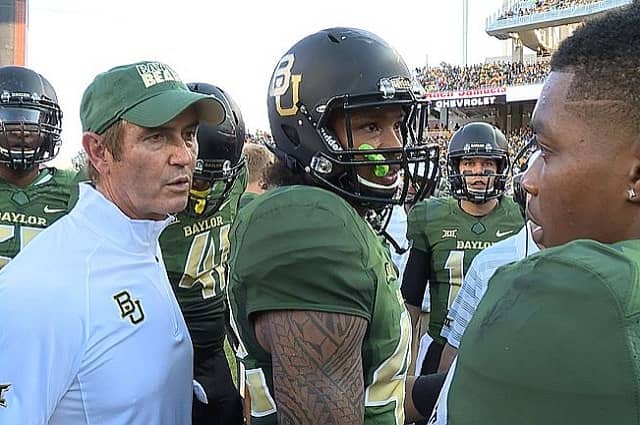 Baylor University has been fined $462,000 by the U.S. Department of Education for violations of campus crime and safety rules.  The fine is a result from the university announcing in 2017 that it was being investigated in light of public reports of sexual assaults on campus being higher than the numbers Baylor had officially reported.

The violations of the Jeanne Clery Act occurred between 2011 and 2016 and included “lack of administrative capability, failure to report accurate crime statistics in the annual security report, failure to comply with timely warning issuance and policy provisions, and failure to maintain an accurate, complete daily crime log,” according to a news release issued Friday by the school.

In 2016, Baylor fired head football coach Art Briles and suspended athletic director Ian McCaw, who soon resigned, after an investigation by a third-party law firm found problems in how complaints of sexual violence against football players had been addressed. The problems were university wide and also led to the demotion, and eventual departure, of former university president Ken Starr.

The Clery Act resolution is just one aspect of closure for the university, which remains under investigation by or in litigation with several other entities, including the NCAA.

Baylor had been scheduled to appear before the NCAA infractions committee this month, but that hearing was postponed to an unknown date because of NCAA staff furloughs and other scheduling conflicts, according to sources.

The NCAA has charged Baylor with lack of institutional control and has charged Briles with failure to promote an atmosphere of compliance, among other alleged violations, the sources told ESPN.

But it’s not clear what specific reports of criminal offenses were included in the violations, and whether they involved athletes; a spokesperson for the U.S. Department of Education did not immediately respond to a request for a more detailed report. The Clery Act requires reporting on crimes, including sex offenses, on campus and in university-controlled housing and facilities; it does not pertain to off-campus private housing.

In recent years, Baylor has corrected its prior-year statistics in its annual crime and safety report. For example, Baylor had initially reported two forcible sex offenses in 2012 but has since corrected that number to seven. In 2018, the most recent year available, it reported 20 sex offenses on campus.

In Friday’s news release, Baylor president Linda A. Livingstone stated that the school has “worked diligently to resolve the issues that prevented Baylor from effectively implementing our Clery obligations in the past, and we believe that the Department of Education took note of our corrective actions and found them acceptable.”

Baylor’s fine was significantly less than recent fines of other major universities for Clery Act violations, including a $4.5 million fine issued against Michigan State in 2019 and a $2.4 million fine against Penn State in 2016.

Philadelphia law firm Pepper Hamilton — which was hired in 2015 by Baylor’s board of regents to investigate whether the school properly handled allegations of sexual assault by students, including football players — was critical of the culture within the football program and of Briles’ discipline of players. According to Pepper Hamilton, its findings “reflect significant concerns about the tone and culture within Baylor’s football program as it relates to accountability for all forms of athlete misconduct.”

Campus-wide, investigators found examples of actions by “university administrators that directly discouraged complainants from reporting or participating in student conduct processes, or that contributed to or accommodated a hostile environment.”

The university is still waiting on the results of a separate investigation by the U.S. Department of Education’s Office for Civil Rights, which was the result of a complaint filed in October 2016 against the school by its outgoing Title IX director, Patty Crawford. Crawford said university leaders were not taking appropriate steps to resolve the school’s poor handling of sexual violence complaints.

Baylor also is still under criminal investigation by the Texas Rangers state law enforcement agency and McLennan County District Attorney Barry Johnson. A representative from the Texas Rangers referred questions to Johnson, who said in an interview with ESPN in September that he had not received an update on the investigation since early 2019, shortly after he took office.

Texas state Rep. Roland Gutierrez, who requested the investigation in 2017, said in an interview with ESPN last month that he has made new inquiries into the work being done by the Texas Rangers and hopes to get it back on track. Baylor had faced nine federal lawsuits and one state lawsuit pertaining to the sexual violence complaints, and four of those are still ongoing, including one federal lawsuit involving 15 women, two of whom reported being assaulted by football players.

And McLennan County prosecutors have been waiting since February for the Texas Court of Criminal Appeals to decide — for the second time — whether to overturn a decision by a lower appellate court to throw out the 2015 sexual assault conviction of former Baylor player Sam Ukwuachu.