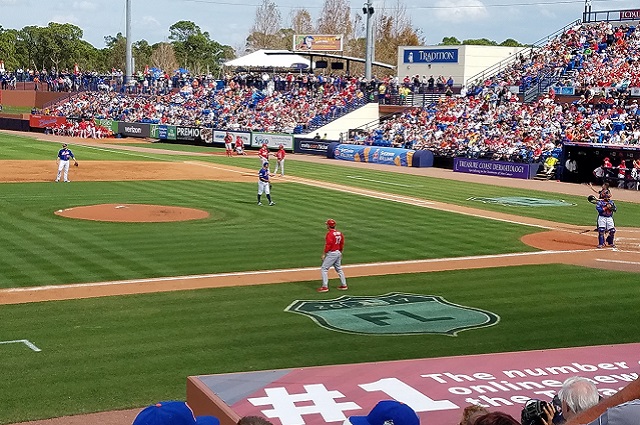 Are those six weeks of preseason baseball games meaningless? Nope.

“Pitchers and catchers report.” Four little words that mean spring is almost here and make the heart of many a baseball fan skip a beat. Spring training, the six-week-long series of workouts and exhibition games, has for decades drawn baseball fans to the warmer climes of Florida and Arizona to watch grown men play effectively meaningless games while basking in the sunshine as the rest of us freeze our butts off in this evil, soul-sucking time of year called winter.

Spring training sounds like a great idea to more and more people every year. According to the Florida Sports Foundation, nearly 1.5 million people attended spring training games in 2018. Over in Arizona, the Cactus League drew a similar number of fans at slightly more than 1.8 million, according to Sports Business Daily.

That means more than 3 million baseball fans went through the turnstiles for spring training games last year, contributing a sizeable economic impact on Arizona and Florida. In 2018 alone, spring training games brought an estimated $687 million to Florida. Additionally, 52 percent of those fans came from out of state.

“The Sunshine State offers exceptional opportunities for residents and visitors to enjoy the national pastime of Spring Training,” says Angela A. Suggs, president and CEO of the Florida Sports Foundation. “We are pleased with the continued success of the Florida Grapefruit League and look forward to many more exciting opportunities to showcase the many communities in Florida, where the world comes to play.”

The numbers of tourists attending spring training are bound to increase as more and more people make spring training an annual tradition, such as Steven Scott, a Detroit Tigers fan from Kalamazoo, Michigan. Scott and his family are regulars in Lakeland, Florida, taking in Detroit games at Publix Fields at Joker Marchant Stadium where the Tigers have held spring training for the last 54 years.

Scott and his wife take their two children to Florida to see the Tigers and a handful of other teams each spring. He says spring training is a time to catch games and see players in a more relaxed atmosphere before the regular season starts and the wins and losses start to take on meaning.

“It’s a fun thing to do with your family. I think it’s a lot more fun than going to the stadium during the regular season,” says Scott. “I’ve always loved the game, and it’s just a lot more intimate here than it is at Comerica Park. It’s just different.

“We used to almost just go to practices,” Scott adds, “because it was so much fun watching major leaguers practicing like little kids.”

For Scott, spring training is all about kids, grown or otherwise. His daughter was able to get a hat signed by Miguel Cabrera this spring, an instance that reminded him of a time going to spring training games when he was a child. Scott and his family used to go to Clearwater, Florida, each spring mostly to see the Philadelphia Phillies of the early 1990s. He says, in those days, it was much easier to get up close and personal with major leaguers than it is today.

“One time back in the day, my brother and I got to be bat boys for the Phillies. That’s kind of a neat thing that would never happen today,” Scott says. “Just being able to see the big star players walk by you is one of those special experiences you’ll always remember.”

While Scott has been a spring training devotee since childhood, others only came to know the joys of preseason baseball later in life, such as Kurt Lindsay, a business owner from Newport News, Virginia. Lindsay is part of a group of friends who attend several games in Florida each season. He says he was convinced to make the trek to the Sunshine state a dozen years ago and has been going ever since. “A buddy of mine had been telling me for years ‘you got to go to spring training,’” says Lindsay. “I finally decided to go one year and had a great time. I look forward to it every year.”

This year, Lindsay and his friends saw eight games over a two-week period, catching a glimpse of big league stars and aspiring major leaguers with the Braves, Yankees, Phillies, Tigers and Marlins, but especially his beloved St. Louis Cardinals. Lindsay and his group of baseball fans finished the journey across Florida on March 8, taking in a night game between Philadelphia and Atlanta, summing up the trip nicely on his Facebook page writing, “There’s nothing like a night game…and beer.”