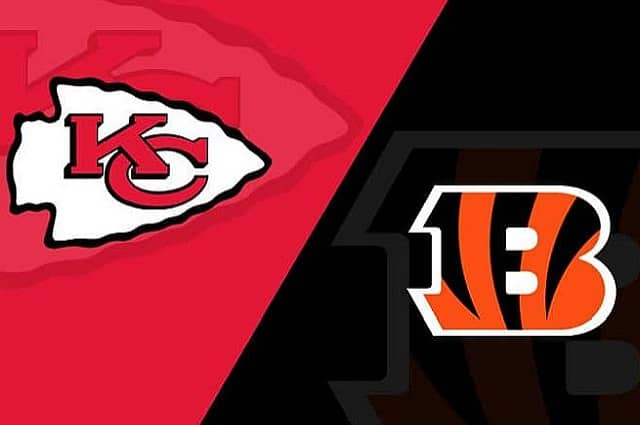 The AFC Conference Championship game teams are set.  But it was one crazy weekend of games that determined the matchup. One game was decided by a last-second field goal and the other by one of the craziest final two minutes ever! The way that the Bengals and the Chiefs made it out of the AFC Divisional Round and into the championship game is still leaving me speechless. Here’s our preview for the game this weekend.

The Bengals had their backs against the walls as the Tennessee Titans drove down the field with the game tied at 16 and hopes for a game-winning field goal.  However, Ryan Tannehill’s pass was deflected and intercepted by Cincinnati with just 20 seconds left and that’s all Joe Burrow needed to get his squad into field goal range for a game-winning kick. Cincy hadn’t won a playoff game since 1991 and now they have two in the matter of two weeks.

The Chiefs really looked dead in the water after Josh Allen found Gabriel Davis for a touchdown strike with 1:54 left in the game. To make matters worse, the Bills completed the 2-point conversion to put the Chiefs down three. But Mahomes quickly marched down the field and led the Chiefs to a touchdown to retake the lead. That prompted the Bills to march down the field and score another go-ahead touchdown with just 13 seconds remaining.

But it was 13 seconds too many, as Mahomes miraculously got the Chiefs into range for a field goal to tie the game and send it to overtime.  Kansas City won the coin toss, and it only took a few plays for an exhausted Bills secondary to be scorched by Mahomes as he found Travis Kelce in the endzone for the game-winning touchdown.

With all the dramatics out of the way, we can focus on this week. If we know one thing, it’s that these two teams can gut games out late in the contest and come away with a win. The two met just a few weeks ago and the Bengals came away with a 34-31 win with a last-second field goal. That turned out to be the Chiefs only loss in their last 12 games.

Both teams have weaknesses and at this point, they will be exploited. The Bengals shortcomings are obvious as their offensive line allowed Burrow to be sacked nine times against the Titans. The Chiefs have great rushers and will force him to move in the pocket.

Kansas City has a weak secondary, and they might be without Tyrann Mathieu after the safety was knocked out of Sunday’s contest in the first quarter with a concussion. Burrow has a big arm and led the Bengals as the seventh-best pass offense in the NFL this season. In their first two playoff games this year, the Chiefs allowed Big Ben to pass for 215 yards and two scores and Allen to pass for 329 and four scores.

One team has all the experience in the world in this spot and will be hosting the game –  a record fourth consecutive year – in front of a crowd that gets louder than anyone in the National Football League. I believe that Joe Burrow is a winner, but Mahomes has the experience. I think it’s a close game, but I have the Chiefs walking away as winners, 31-26.