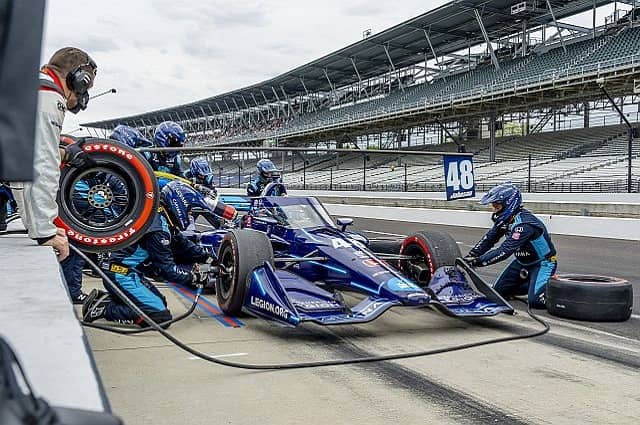 When you think of the biggest races in the world and Jimmie Johnson, you just assume that he has won them all. But when it comes to IndyCar, Johnson is now just a rookie, beginning his new career at the starter’s line. The seven-time NASCAR champ retired from the sport in November of 2020 and now he is trying his hand at something different in IndyCar.

Johnson has a shot at driving the Indy500, perhaps as early as next year, but he has some selling to do according to him, because after all, he just left one incredibly dangerous sport to head into another.

“I’m going to keep a close eye on things with their safety on the ovals. It’s dramatically increased this year with the windscreen they have. I’ve always wanted to do the 500, but I would have to do a lot of selling to my wife to get that hall pass.”

When Johnson left for IndyCar, he said he would just be doing road and street courses because of the dangerous notion of the ovals. So, when the Indy 500 races on May 30, Johnson will be there, but he won’t be racing. In fact, he will be working with the NBC Sports Crew as an analyst for the race. But that doesn’t mean he isn’t itching to get out there and race the oval races, but again, his wife is the one making the call. As he watches the warmups, he says he is getting more comfortable with the idea of it.

We can only hope that one day Johnson will be out there racing in the Indy 500, but this weekend won’t be when he does it. The Greatest Spectacle in Racing is no joke and having the training to be confident in that spot might be the most important thing. Oddly enough however, Johnson is very used to racing in Indy. He has won NASCAR’s Brickyard 400 in 2006, 2008, 2009 and 2012.

He made his IndyCar debut April 18 at the Barber Motorsports Park in Birmingham Alabama, where he finished 19th.  Johnson has a two-year deal with Ganassi Racing and has a couple of excellent teammates, including reigning champion Scott Dixon, who he will watch from the “Peacock Pit” this weekend.

He is one of the greatest NASCAR drivers of all-time who has 83 NASCAR Cup victories and may have been able to grab a couple more had he stuck with it. But this is a bold new venture for Johnson and his transition into IndyCar is going to be fascinating to watch. These are two vastly different styles of racing on much different planes, and if Johnson can make the transition easily, he will do something incredibly special. We might not see him in the Indy500 this year, but I am sure that he will keep nagging his wife about racing it one day.